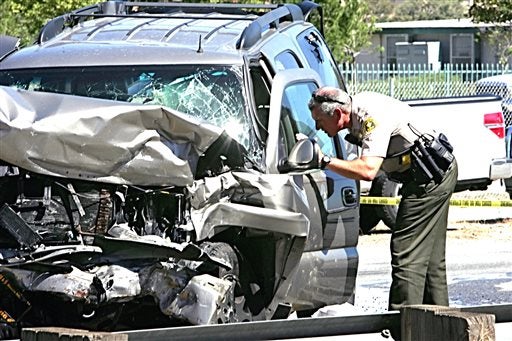 SAN BERNARDINO, Calif. (AP) – A sheriff’s deputy in a helicopter shot at a suspected home invasion robber who led authorities on a 100-mph chase Friday, and the suspect died on a Southern California freeway, authorities said.

It wasn’t immediately clear whether the man had been wounded by gunfire or died from other injuries, San Bernardino County Sheriff’s Deputy Deon Filer said.

The gray Chevrolet Yukon reached speeds of 100 mph as it raced along streets and traveled southbound in the northbound lanes of Interstate 215 into San Bernardino, sideswiping a car, authorities said.

The wrong-way driving prompted a deputy to open fire on the SUV from a helicopter.

“It’s a public-safety issue,” Deputy Olivia Bozek said. “Once he starts going the wrong way, obviously he doesn’t care about passengers or pedestrians or other cars that are around.”

The driver then bailed out of the vehicle, which kept rolling and crashed head-on into a Dodge Durango. Three people in that SUV were injured and taken to hospitals, officials said.

One was listed in critical condition and two were in fair condition, KABC-TV reported.

The fleeing driver, meanwhile, continued along the freeway until he collapsed a short distance away near an overpass. He died at the scene.

The incident closed the northbound lanes for hours, backing up traffic for miles.