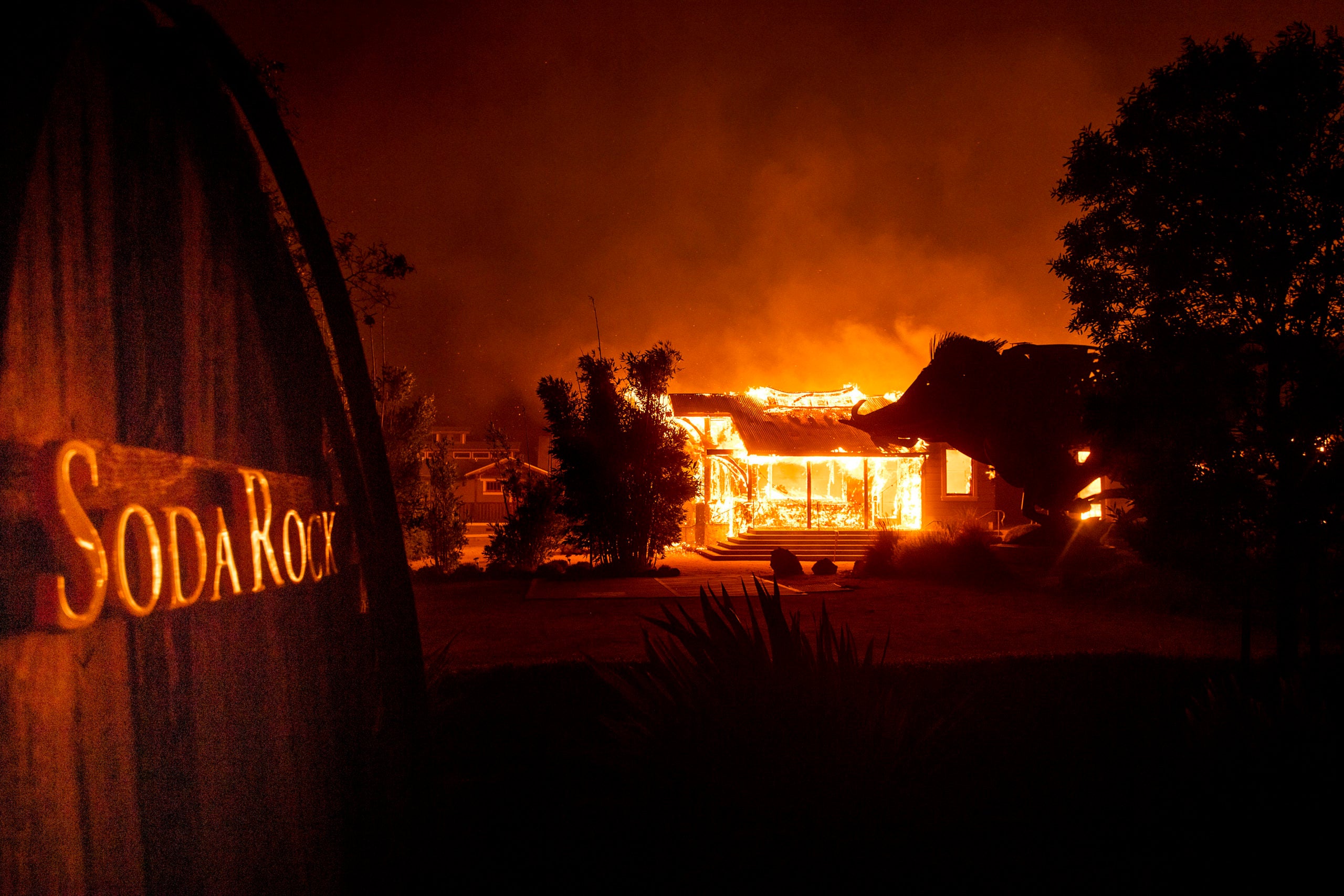 SAN FRANCISCO (AP) — Authorities in Northern California ordered 180,000 residents to flee their homes Sunday as historic winds fueled a wildfire in the wine country, while electricity was shut off for millions of people in an effort to prevent more fires.

The fear that the winds could blow embers and spread fire across a major highway prompted authorities to expand evacuation orders that covered parts of Santa Rosa, a city of 175,000 that was devastated by a wildfire two years ago. The latest evacuation orders after Pacific Gas & Electric shut off power to 2.3 million people across 38 counties starting Saturday evening.

“This is the largest evacuation that any of us … can remember,” the Sonoma County Sheriff’s Office tweeted Sunday morning. “Take care of each other.”

About 90,000 residents were already under a mandatory evacuation order Saturday night that encompassed a huge swath of wine country stretching from the inland community of Healdsburg west through the Russian River Valley and to Bodega Bay on the coast, Sonoma County Sheriff Mark Essick said.

The sheriff pleaded with residents in the evacuation zone to get out immediately, citing the 24 lives lost when a wildfire swept through the region two years ago.

The current wildfire, dubbed the Kincade Fire, began Wednesday night and is only 10% contained, the California Department of Forestry and Fire Protection said Sunday. It grew by almost 4,000 acres overnight to 30,000 acres (47 square miles) and has destroyed 79 structures.

Healdsburg lost one of its historic attractions to the flames Sunday when embers carried by the winds sparked a blaze that engulfed the Soda Rock Winery whose buildings included a general store and post office founded in 1869.

PG&E said the new wave of blackouts was affecting about 940,000 homes and businesses in 36 counties for 48 hours or longer. The city of San Francisco was not in line for a blackout amid shut-offs for most of the rest of the San Francisco Bay Area, the wine country to the north and the Sierra foothills.

Authorities expanded evacuation orders to Santa Rosa early Sunday out of fear that blowing embers could spread the fire across U.S. 101, the main thoroughfare in the area, and march toward the coast.

“The concern is that it may jump the freeway,” said Brandon Halle, a spokesman with the California Department of Forestry and Fire Protection. “We’re focused on getting ahead of this fire.”

To the south, a wildfire Thursday destroyed 18 structures in the Santa Clarita area north of Los Angeles. Nearly all the 50,000 residents ordered to evacuate were allowed back home after Santa Ana winds began to ease.

“I’m thankful that nothing happened to my house, but I feel bad for my neighbors,” Briano, 71, said Saturday.

Sheriff’s officials said human remains were found within the wide burn area, but it’s unclear if the death is connected to the blaze. The Tick fire was 55% contained.

Several thousand people in neighboring Lake County were warned to be ready to evacuate if an order is given. A 2015 wildfire in the area killed four people and burned nearly 2,000 buildings.

What sparked the current fires is unknown, but PG&E said a 230,000-volt transmission line near Geyserville malfunctioned minutes before that blaze erupted Wednesday night.

The possible link between the wine country fire and a PG&E transmission line contained grim parallels to last year when most of the town of Paradise burned, killing 85 people in the deadliest U.S. blaze in a century.

Many residents facing blackouts had barely recovered from a previous shut-off.

About 30 miles (48 kilometers) northeast of Sacramento, 65-year-old Sukhwinder Singh said he worked the Quality Market convenience store cash register in the dark, but nobody wanted warm soda and melted ice cream. He estimates he lost about $1,100 in sales and products. Singh has a generator now, but said he can’t keep it running all night when the store is closed.

“I don’t know how we can pay the bills at the end of the month,” he said.

Also northeast of Sacramento, Scott Paris estimates about $20,000 lost in shutting down his High-Hand Nursery and Cafe when PG&E cut the power earlier this month for about 24 hours during a weekday. A beautiful fall Sunday might bring $50,000 to $60,000 worth of business.

“We’re scrambling to get enough generators,” he said. “If this is the new normal, it’s going to drive up a lot of costs. It drives up stress.”