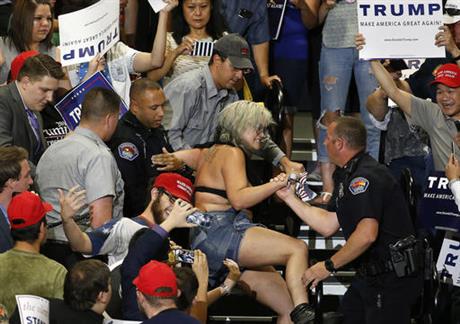 ALBUQUERQUE, N.M. (KRQE) – In the hours leading up to the rally inside the Albuquerque Convention Center, hundreds of protestors lined the streets outside.  It wasn’t always peaceful.

It started out calm but things escalated when a line of protestors stood, greeting Donald Trump supporters when they showed up-calling it “The Walk of Shame.”

Hundreds of protesters lined the streets hours before Trump was even scheduled to speak.

“We need to make sure that he knows that we do not accept the message that he’s bringing and the hatred,” said Juan Sanchez with Democratic Party of New Mexico.

The anti-Trump movement started a march down Central and then things started heating up as protestors clashed with Trump supporters.

At one point, a man in a wheel chair even pleaded with police after he said he was assaulted by a protester.

“These people have no clue what really goes on I guess, what they just did to a handicap person – who has the right to rally for the other side,” said Dereck Scott, Trump supporter.

By the time the rally started at 7, Trump protestors rushed toward the convention center entrance. That is when the police responded in riot gear.

Several protesters managed to make it into the building beforehand though. One woman was dragged out after making a scene behind Trump. Two other men were also led out after struggling with police. Trump’s response was, “Get ’em out of here.”

At one point officers decided it was an unlawful assembly and asked people to move back.

But as the night went on, some started burning Trump t-shirts across the street.

Some people were even shouting at police and slamming barriers into the wall.

Things continue to heat up and police say officers did not have to use any force.  At least one person was detained.

One person was arrested.

Albuquerque police say although there were reports of tear gas used, they say they did not deploy it.

But protesters did throw rocks and bottles at police. People were also seen jumping on police cruisers causing damage to window shields.

Police said several officers are being treated for injuries after being hit with rocks.