Canada women beat Russia 5-0, will meet US in hockey final 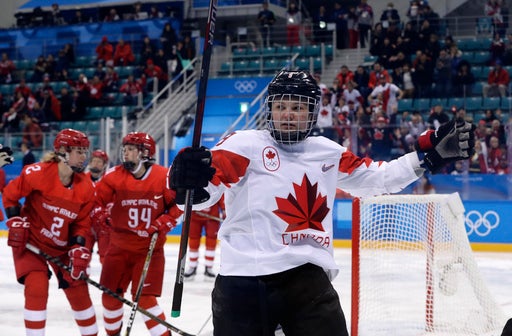 GANGNEUNG, South Korea (AP) It’s part of the routine now, as much a staple of the Winter Games as the medal ceremonies, the doping scandals or the sequins on the figure skating costumes.

”Everyone’s plans are falling into place, and you have two great opponents at the end,” Canadian coach Laura Schuler said on Monday night after a 5-0 victory over Russia earned the four-time defending champions another matchup with the United States in the Olympic final. ”It’s awesome, on the world’s biggest stage, to have two powerhouses going for it at the end.”

Jennifer Wakefield scored twice and Shannon Szabados stopped 14 shots to lead Canada to its sixth Olympic gold medal game – that’s every single one since women were added to the Winter Games in 1998.

Counting Thursday’s Pyeongchang finale, five of those will have been against the United States. No one else has ever skated away with an Olympic gold medal.

”You know we have the rivalry. It’s well-documented,” said Rebecca Johnston, who scored Canada’s fifth goal. ”And we’re just looking forward to having the opportunity to bring home another gold.”

Marie Philip-Poulin, who scored the last two goals against the United States in Canada’s overtime win in Sochi, also scored on Monday. The Canadians have won 24 in a row at the Olympics since losing the gold medal game in 1998.

Canada outshot Russia 47-14 but struggled to pull away, scoring just once in each of the first two periods before Wakefield bounced one in off goalie Valeria Tarakanova just two minutes into the third. Emily Clark made it 4-0 just 31 seconds later.

Russian coach Alexei Chistyakov swapped his goalies, but it was too late. The Russians still have a chance for their first Olympic women’s hockey medal ever when they play Finland in the bronze medal match on Wednesday.

Canada’s 1-0 lead after the first, a period in which it outshot Russia 11-6, was a bit of a disappointment. Poulin made it 2-0 in the second – still closer than anyone expected.

Just 1:59 into the third, Wakefield’s shot from a tight angle on the left side caught the goalie’s right arm and bounced into the goal. Thirty-one seconds later, Clark put in a rebound to chase Tarakanova.

The United States, which advanced to the gold medal game with a 5-0 victory over Finland earlier Monday, won the Four Nations Cup, third only to the Olympics and world championships in importance, beating Canada in three of the first four games in a Pyeongchang tuneup tour. But Canada has won the last five matchups.

None of it matters, really.

The gold medal match is the game these two have been looking forward to since Canada rallied from a two-goal deficit and beat the Americans in overtime in Sochi four years ago.

And it’s the only thing right now that can help the 10 American holdovers from that team ease the pain of their 2014 collapse.