Canadian police: 2 of 4 dead in shooting are officers 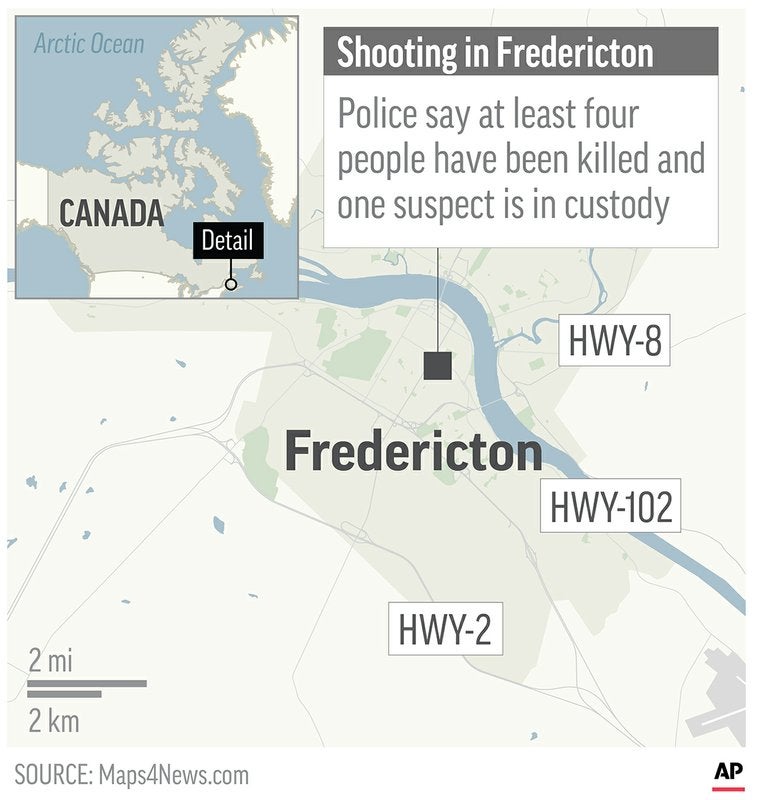 FREDERICTON, New Brunswick (AP) — Four people, including two police officers, were shot to death in an apartment complex in the eastern Canadian city of Fredericton on Friday, and a suspect was taken into custody, authorities said. It was a rare instance of gun violence in the Canadian province of New Brunswick.

Fredericton police said they are not releasing the names of the slain officers yet.

Justin Mclean, who lives in the complex, said he tried to help.

“I just woke up and heard gunshots and I looked outside my window. There was basically three dead people laying there. It wasn’t a pretty sight,” Mclean told the Canadian Broadcasting Corp.

“The cops were trying to put one of the officers into the vehicle so they could take him out to safety.”

He said there had been fights in the apartment complex, but never anything like this.

David MacCoubrey, who also lives in the complex, said he heard about 20 shots and hid on his kitchen floor

“I’m on my floor,” he said in a phone interview. “The cops have come through my place. They have searched all the apartments in the building. It sounded like it started in the courtyard area.”

He awoke in his apartment on Brookside Drive around 7 a.m. local time to the sound of three gunshots 33 feet (10 meters) from his bed.

MacCoubrey said his apartment complex has four buildings in a square, and it sounded like the shots were coming from the middle of the complex.

He said police have been searching the buildings, and he’s been sitting away from windows.

“It’s not something that happens here regularly,” he said.

Travis Hrubeniuk, who lives nearby, said his fiancee had just left for work around 7:45 when he began hearing a steady stream of sirens.

Hrubeniuk said residents have been advised to stay inside with their doors locked. The quiet residential neighborhood, which has houses, grocery stores, a church and an elementary school, is the last place Hrubeniuk said he expected to encounter a dangerous situation.

“This is the first time I’ve even heard of any serious crime or violent crime in this city,” he said.

Fredericton has a population of about 58,000 and is located just northeast of Maine.

New Brunswick Premier Brian Gallant tweeted his condolences to the victims and their families. “During this difficult time, our thoughts are also with the courageous women and men on the front lines working to keep us safe,” said Gallant.

Bill Henwood, a funeral director at York Funeral Home, whose business is located inside the cordoned off area on Brookside Drive, said the lockdown occurred before anybody got to work.

Henwood said people are sitting in their cars or just standing near the blockade of police and fire vehicles “hanging tight and waiting for word” on what comes next.

“All the businesses even on the outside of the lockdown area have their lobbies and their business areas closed. They aren’t letting customers in at the moment,” he said.

Henwood said the situation is a shock.

“It’s not something that we expect in Fredericton to wake up and hear about. To see that there’s actually fatalities is pretty extraordinary for this area. It doesn’t normally happen.”