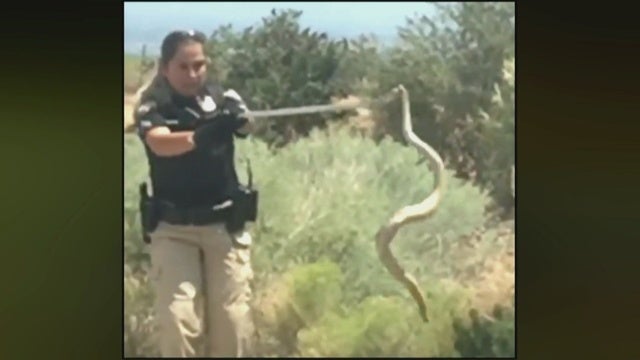 ALBUQUERQUE, N.M. (KRQE) — Early Tuesday afternoon, an Albuquerque woman looked out her window and saw just half of what she could tell was a massive rattlesnake.

“The thing that really alarmed me was the size of the animal,” said Linda Hamlin.

In the 25-second video, you can see animal welfare officers approaching a bush where the snakes signature ‘rattle’ sound is coming from.

Hamlin says the snake had gone underground into a gopher hole, but the officers forced it out by running a hose into the hole.

Then, a female animal welfare officer grabs the snake by the neck using a long pair of tongs.

“I could see her arms straining,” said Hamlin.

The snake, doing everything it could to get away, tried to pull away, but the officer won.

When she fully pulled the snake out of the hole, is the first time any of them had seen the full length of the snake, about five feet long.

“The snake was about as long as she was,” said Hamlin.

Hamlin, whose home backs up to the Petroglyph National Monument, says usually snakes don’t bother her.

“My husband and I totally recognize we moved into snake country up there,” said Hamlin.

Hamlin says this wasn’t even the first time she saw a rattlesnake in her yard, but she was worried about her new neighbors.

“We have brand new neighbors with small children who have never gone through a summer in the house before and the school bus was coming,” said Hamlin.

Fearing one of the kids would cross the rattler’s path, she called animal welfare.

“What I noticed out of it is the girth of the snake. I mean that’s a really big rattlesnake,” said Adam Ricci, with Albuquerque’s Animal Welfare Department.

Ricci says animal welfare officers respond to about one or two rattlesnake calls a day. He says calls on the metro’s outskirts aren’t that rare but seeing a snake this size is.

Per policy, the animal welfare officers put the snake in a bucket, drove it to a remote area and released it.