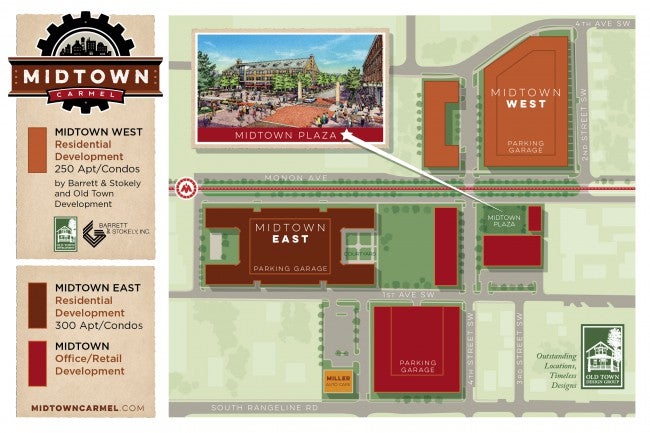 Developers call it the first of its kind, and say it will lead to hundreds of new jobs. The goal is to connect two of Carmel’s most popular areas.

The new project will fill the space between the City Center to the south and Main Street – the Arts and Design District – to the north. Carmel hopes to create jobs by filling this space and in more residents and businesses.

The development, called Midtown West, will house office space with 250 apartments and condos, anchored by a ground-floor business and a 550 space parking garage. Carmel’s mayor said the $45 million investment will be worth it.

“It’s going to pay off tremendously for us with the amount of private sector capital that’s now being invested,” said Mayor Jim Brainard.

Midtown West just a part of an even bigger project. Brainard said the whole Midtown project will create hundreds of construction jobs, plus potentially hundreds more as businesses move in and become established. The city announced the $150 million “Midtown East” last fall, and couldn’t keep up with the demand from businesses and families wanting to move in. .

“What we’re finding is that activity breeds activity. Last fall, we announced the $150 million project. It created this new project that didn’t exist last fall, and there’s probably more to come,” said Moffett.

Brainard said the new developments will draw in businesses and residents to the area.

“People can work, eat, live all in one area. Right on the trail ,which in Carmel is beach front property,” said Brainard.

The projects will sit on either side of the Monon Trail, creating a pedestrian-friendly downtown core.

Moffett said he’ll release the full plans for Midtown West in a few weeks, and construction should start before the end of the year. There’s no set end date yet, but the mayor hopes it will be finished in the next two to three years.

This might not be the last Midtown project. Another group owns the property just south of Midtown West. The city aims to eventually redevelop that area as well.

“It’ll make Carmel so much more competitive than even it is today,” said Brainard.