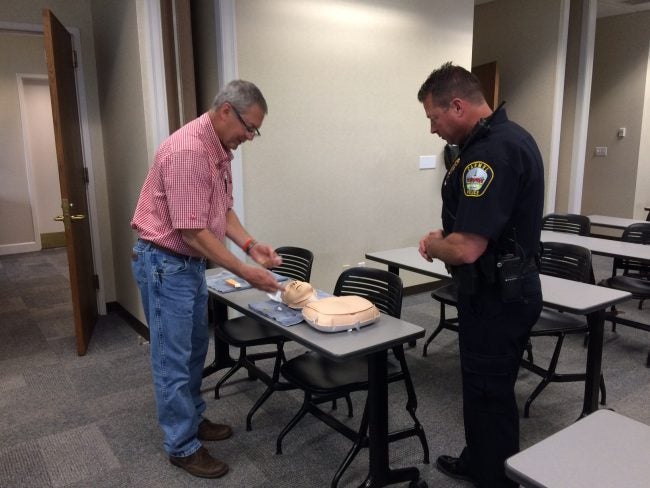 CARMEL, Ind (WISH) – To fight a growing drug problem, Carmel is the first city in Hamilton County to equip its police officers with overdose medication.

Using a dummy, Carmel officers spent time Wednesday learning how to use the drug, Narcan. It’s medication used to help people suffering from a drug overdose.

It’s a new tool some neighbors are glad to see officers use.

“If they get there first, and there’s someone in trouble, then why not have them carry it?” Carmel resident Gabriel Whitaker said.

“If they’re first responders then they may have to respond to someone who is overdosing,” resident Peter Mitchell said. “If they’re the first people there they should be able to do it.”

This is exactly why Carmel Police leaders say the drug was added to the force.

“It’s just something that we really need to have and provide to our officers,” Carmel Police Chief Tim Green said. “They need to have the equipment when they’re dealing with different certain situations.”

While Carmel Police is the first city agency to carry the drug, the Hamilton County Sheriff’s Office rolled out Narcan three months ago. Since then, all deputies are equipped with it and haven’t had to use it.

Drugs, especially heroin, are a growing concern in Carmel and Hamilton County. Carmel officers have seen a significant increase in arrests and overdoses over the past few years.

At the county drug court, they’ve had nearly 100 participants since 2010, and 50 percent are opiate addicts.

“Drugs are everywhere,” Whitaker said. “I wouldn’t think Carmel would be the first one, but I assume that Carmel Police have more money than other police and they’re able to implement it first.”

The Narcan wasn’t paid for by Carmel Police. It’s part of a statewide effort to get it in the hands of local agencies.

The drug and training was funded by a state grant. It’s money officers believe will make a difference.

“It’s just another tool we can give and if our officers are the first ones there and they can utilize it and it saves someone’s life, then that’s a very good investment and tool for law enforcement,” Chief Green said.

You may not notice Carmel officers wearing Narcan quite yet, as the rest of the department needs to be trained, but once they are, officers will be adding it to their tool belt.