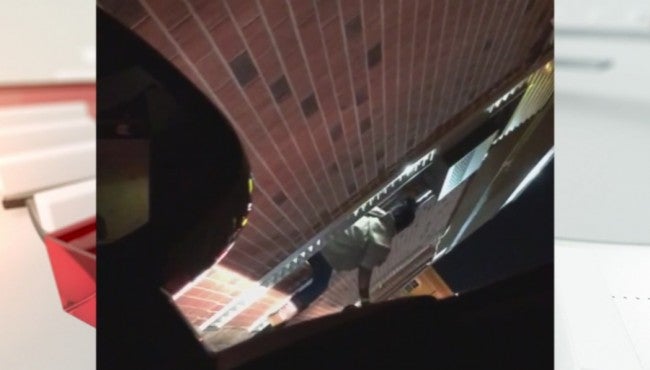 INDIANAPOLIS (WISH) — An argument over chicken nuggets got out of hand when police said two women attacked the manager of a 24-hour McDonald’s restaurant through the drive-thru window.

The fight was caught on camera by another customer. It happened around 2:30 Friday morning at the McDonald’s near 16th and Meridian streets.

The customer, who recorded the incident, told 24-Hour News 8 she’s visiting from out of state and went to McDonald’s to get a cup of coffee when she heard someone yelling.

“I was like, ‘This can’t be happening in front of me right now,'” said Monique McNeely, who witnessed the incident.

“It was a little bit disturbing at first, but I knew that if I got it on video that I would be able to help the individuals inside the McDonald’s because this is proof that, you know, something horrible was happening to these individuals,” she said.

Cellphone video taken by McNeely shows a silver car, but the driver and passenger of that car are nowhere to be seen inside the car– just in the drive-thru window.

Moments later, you can see the two women on video climbing out of the window, yelling and screaming at the manager before driving off.

“I couldn’t even imagine being one of the workers and seeing somebody coming into that window like that. That would really freak me out,” she said.

The manager told 24-Hour News 8 off-camera that he’d experienced a lot of things working in the fast food business, but nothing like this.

He said the women pulled up to the second window of the drive-thru and said they hadn’t been given all of the nuggets they ordered. The manager said they placed an order for four nuggets, not 10, and even showed them the receipt.

He said the women asked if they could place an order for them at that time, and the manager told them they would have to drive around and order at the sign board.

According to a police report, the manager told them, “Have a nice day,” and that’s when the situation escalated to this.

“All I knew was I had to just keep on rolling and keep on shooting that video because it was going to help the individuals inside especially that last bit of video because that’s when I captured the license plate number,” she said.

McNeely said she had no idea what the fight was about at the time and couldn’t believe it was over chicken nuggets.

24-Hour News 8 learned the women knocked over a basin full of tea and damaged the tablet register. The store manager was not injured.

Police said they are still investigating the incident.