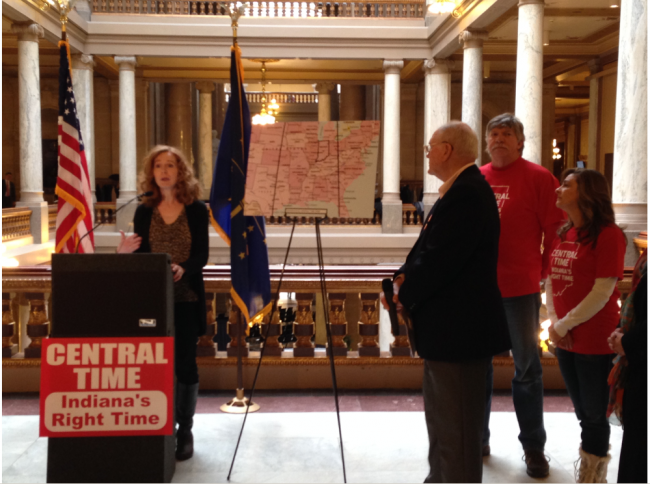 INDIANAPOLIS (WISH) – Is Indiana in the wrong time zone?

That is the argument being made by a coalition of people who want this state moved from the Eastern Time Zone to the Central Time Zone.

It is a debate that always comes up at this time of year because our clocks change on Saturday night. It’s time to Spring ahead.

For some, however, there is a desire to set the clocks back year round.

The Central Time Coalition was at the Statehouse Thursday in an effort to restart the time debate in this state.

“The problem in Indiana isn’t with daylight saving time,” said Erin Debrota. “It’s that we’re in the wrong time zone.”

But ever since Indiana voted to adopt Daylight Savings Time on a close vote in 2005 lawmakers have been unwilling to revisit the issue.

State Representative Jeff Thompson, R-Lizton, filed a resolution calling for summer study committee this year to look at time related issues, but even he likes the way things are now.

“I like Eastern time, I do, but it’s not about me,” said Thompson. “It’s not about personal preferences, it’s about what’s best for students and our economy.”

“We are running two hours in front of our biological clocks,” said coalition member Jim Disney.

He and other members of the coalition argue that it’s often too dark in the morning for students to go to school.

“That’s what’s really important, the safety and the well-being of the citizens,” said Sue Dillon, “not whether I can play golf in the evening.”

The coalition has had 47 school boards sign on, along with 25,000 voters but it’s going to take more than that to get state lawmakers involved.

House Speaker Brian Bosma was asked if there is an appetite for a time change.

When asked if there will be a study committee to look into it he said no.

He was then asked if he ever wants to deal the time issue again.

Again, he said no.