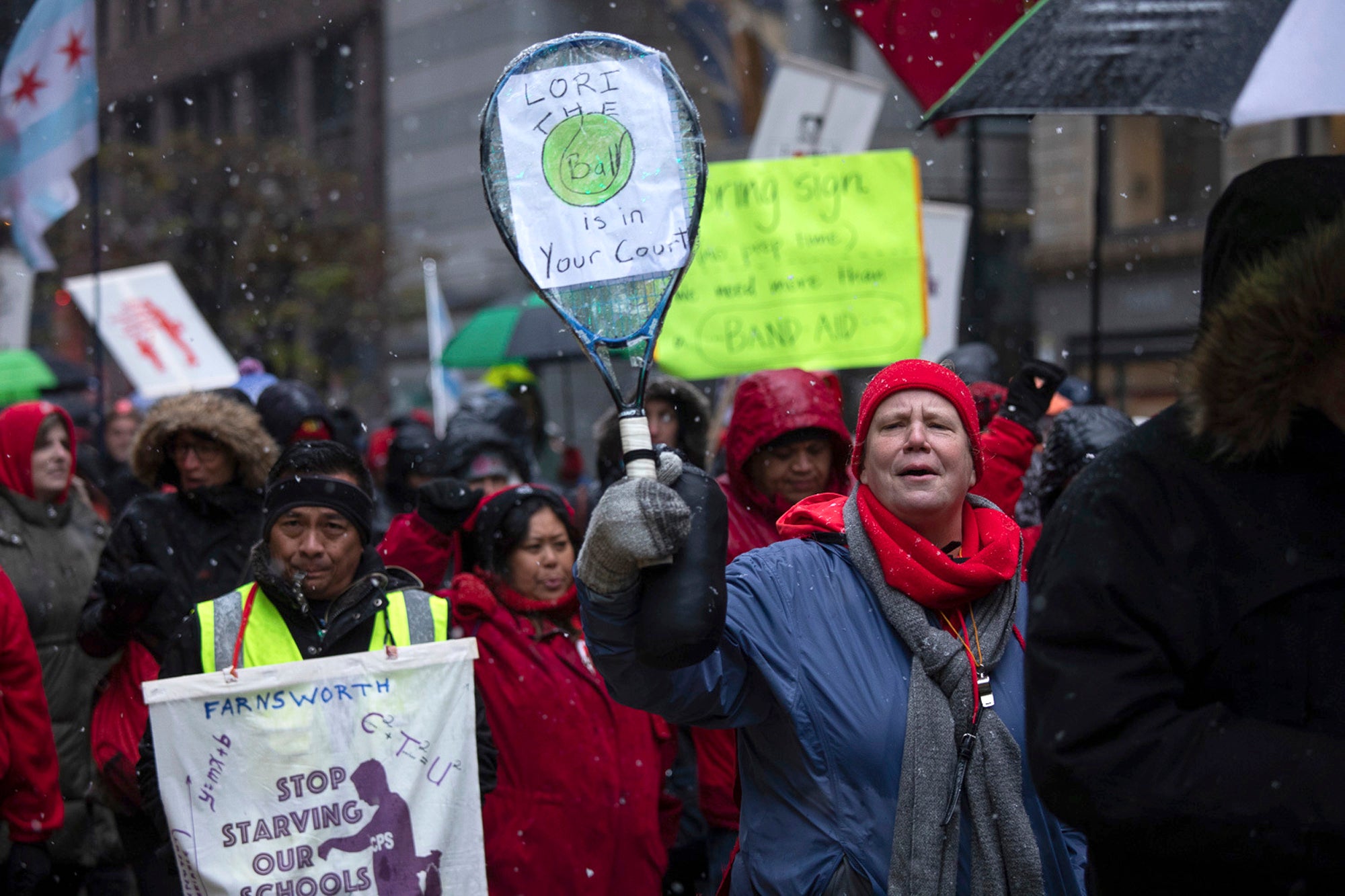 CHICAGO (AP) — Chicago teachers and the nation’s third-largest school district reached a labor contract deal on Thursday, ending a strike that canceled 11 days of classes for more than 300,000 students.

Mayor Lori Lightfoot announced that the district had reached a deal with the Chicago Teachers Union after months of unsuccessful negotiations led to the city’s first significant walkout by educators since 2012. The union’s 25,000 members went on strike Oct. 17, holding marches and rallies across the city.

Chicago Teachers Union delegates voted late Wednesday to approve a tentative deal that includes pay raises over five years, but they initially refused to end the strike unless the mayor added school days to cover the lost time.

Throughout the strike, Chicago Public Schools kept schools open, promising parents that their kids would have a safe place to go and receive meals. City parks, libraries and community groups also opened their doors to kids whose parents didn’t want to leave them home alone but were uncomfortable using schools being picketed by educators.

Teachers said the strike was based on a “social justice” agenda and aimed to increase resources, including nurses and social workers for students, and reduce class sizes, which teachers say currently exceed 30 or 40 students in some schools. The union also demanded a 15% raise for teachers over three years.

Lightfoot said a strike was unnecessary and dubbed the city’s offer of a 16% raise for teachers over a five-year contract and other commitments on educators’ priorities “historic.”

The Chicago strike was another test of efforts by teachers’ unions to use contract talks typically focused on salaries and benefits and force sweeping conversations about broader problems that affect schools in large, politically left-leaning cities, including affordable housing, added protections for immigrants and the size of classes.

The agreement that the 700 members of the union’s House of Delegates approved on Wednesday was not immediately released but Sharkey said some of teachers’ wins could “transform” schools in the district.

Broad outlines include a 16% raise for teachers during the five-year contract, a new committee to investigate and enforce classroom sizes that surpass limits in the agreement and funding to add social workers and nurses to the city’s schools.

Lightfoot said at the start of the strike that she would not restore any lost days and stuck to that position late Wednesday in response to the union’s demands. But she and Sharkey met privately at City Hall before Lightfoot emerged from her office on Thursday afternoon to announce the strike would end.

Sharkey, who did not stand by the mayor’s side to announce the strike’s end, told reporters that union members “don’t need to see me smiling with the mayor.”

Lightfoot said she tried to keep her focus on students during the strike.

“I think about all those young people whose lives have been dramatically affected,” Lightfoot said. “I think about the seniors. This is going to be the primary memory of their high school experience and I want to … repair the damage that’s been done.”

The walkout served as one of Lightfoot’s first major hurdles after taking office this year. The former federal prosecutor campaigned on a progressive platform, including school reform, and the union accused her of failing to follow through on campaign promises.

Chicago teachers were joined by thousands of school staff, including security guards and teachers’ assistants who belong to a unit of the Service Employees International Union. That union reached a tentative agreement with the district on Sunday, but its leaders vowed to remain on the picket lines until the teachers reached their own deal.

The strike also spread from the picket line to the playing field, as some high school athletes found themselves shut out of competitions. One school, Solorio Academy, missed a chance to win its second state soccer championship in three years because the tournaments began during the strike.