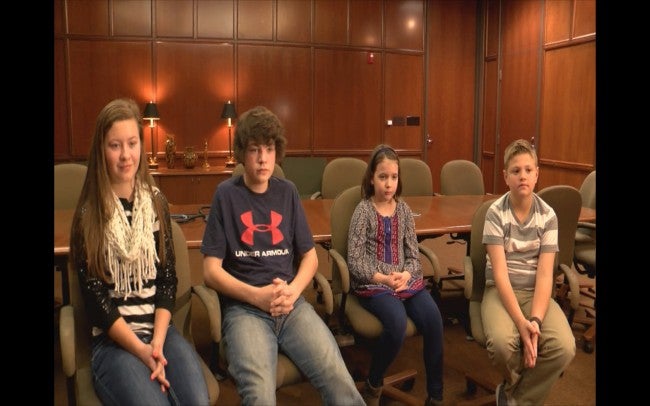 INDIANAPOLIS (WISH) – Each year, tens of thousands of teens try heroin for the first time. Some believe that’s because drug education isn’t reaching adolescents before they’re exposed to the opportunity to take drugs, so 24-Hour News 8 sat down with some local kids to see what they think needs to be done to warn kids about the dangers of heroin.

“He was telling me it’s one of those drugs that just makes you go nuts.”

“It could mess me up, and I could possibly die.”

“If you overdose very easily, you could possibly get very hurt.”

When asked about heroin, these are the responses from Bekah, Chaston, Olivia, and Kameron, but only Chaston at 15 years old has had drug education in school, specifically in gym class.

Chaston is like many kids who are mostly learning about drugs through their peers. It’s something that worries counselor Denise Senter.

“Young people try to make things sound very exciting and attractive, and they minimize the real risk of it,” Senter said.

Senter says many kids know drug nicknames, how drugs are ingested, even how much they cost.

“They’re knowledgeable in one area about it, but they’re not really educated about the true impacts of it,” Senter.

We checked with several local school districts and many said school resource officers, gym teachers and health instructors take on the topic. But Senter says that’s not enough. She says parents and private organizations like Reach for Youth, where she serves as the clinical supervisor, need to close the gap and get kids informed.

“We really want to reach young people at earlier ages – around 11, 12, 13, that’s not too young for young people who are experimenting with something like marijuana, alcohol, or any other kind of drug,” Senter said.

And Kameron, Chaston, Olivia, and Bekah said it’s information they want to know, so they’re ready.

“They’re gong to find out one day, so I think it’s better to inform someone at her age. Teach them about it and tell them ‘don’t do this, and don’t do that,'” Chaston said.

“I think if kids knew what it was they wouldn’t really want to use it,” Bekah said.

“If you warn them when they’re younger, they’re not going to want to do it when they’re older, if they know about it,” Olivia said.