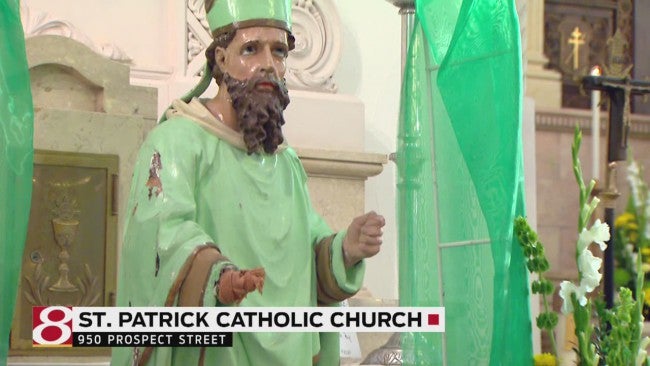 The leader of the Archdiocese of Indianapolis joined members of St. Patrick Catholic Church for an anniversary mass. The parish commemorated its 150th year in Indianapolis. It is the third oldest parish in Indianapolis.

Over the years, members of St. Patrick’s survived a fire that destroyed their church. Then, they adapted to a dramatic demographic change.

Father Larry Janezic told 24-Hour News 8 Irish immigrants “pioneered this area and lived out their faith and lived their life in the context of a parish community.”

Then, highway construction divided downtown Indianapolis and the population changed.

Janezic said the immigrant founders of the church had something in common with the immigrants who attend now. He said, for both, faith was — and is — “very, very important” to their lives.

Father Janezic also recalled the history that gave us St. Patrick’s Day. He said Patrick was a “great figure in the history of the Church,” serving the needy and sharing the faith.

Archbishop Tobin praised Patrick as he encouraged the parish to “rejoice and be glad that the great missionary … brought faith to many families, including my own.” And, in recognition of the changes at this church, he offered his comments in English and in Spanish.