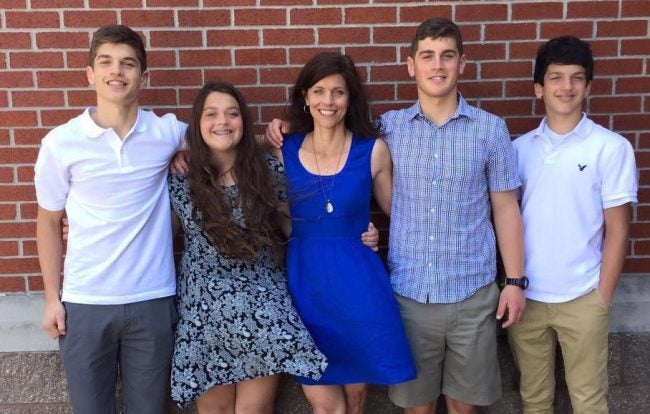 NEW PALESTINE, Ind. (WISH) – The community is coming together in prayer and support after a plane crash in Virginia left six people dead, including four from central Indiana.

People gathered Saturday at Brookville Road Community Church in New Palestine, where the evening service was dedicated to the crash victims.

The pastor at Brookville Road Community Church says 52-year-old Lisa Borinstein and her kids were very active in the church. She and two of her children, 19-year-old Luke Borinstein and 15-year-old Emma Borinstein, died when the plane crashed near Fredericksburg, Virginia, on Friday. They are from Shelbyville, Indiana.

The pilot, 64-year-old William Hamerstadt of Carmel, and two other people from outside Indiana also died.

The Borinstein family’s pastor says two family members were not on the plane. Beau Borinstein is a sophomore at Triton Central and the twin of Emma, who died in the crash. He says Beau had stayed behind for a football game. Drew Borinstein is the other surviving family member. He’s a graduate of Triton Central and now a student at Virginia Military Institute. The pastor tells us the family was heading to Virginia for Drew’s graduation.

“We’re not guaranteed a specific amount of time. We were with the family just the other night here at the church. No one would have expected what happened,” Sorensen said during the service.

“They were a family that just loved life. They loved participating in their community. They were in sports and they were at youth group,” Kent Gish said. Gish attends the same church and says his friends are close with the Borinstein family.

“When my daughter came in and told us last night, when she got the first text, it was hard for her to tell us. And when she did there’s really nothing you can say because there are no words that are going to provide the comfort that you want to comfort them with,” Gish said.

Gish said when there are no words, the community turns to prayer.

Sorensen said the family left a lasting impact on everyone they met, often helping others.

“It’s a family that really looks to care for people outside of just their immediate family, and so it is a very giving and loving family,” he explained.

Community members say they will now focus on loving and supporting the two young men who were not on the plane. Friends of the family say Beau and Drew Borinstein’s father, John, died 18 months ago. Now they’re dealing with the loss of three more family members.

“It’s going to be hard for a long time, and so what we’ll do is be here for them for as long as they need us,” Gish said.

The superintendent of Northwestern Consolidated School District in Fairland, Chris Hoke, said there will be grief counselors on hand at the school over the next few days. District leaders also say they’re working on putting together a community event for friends and family of those in the plane accident. They are expected to release those details on Monday morning.