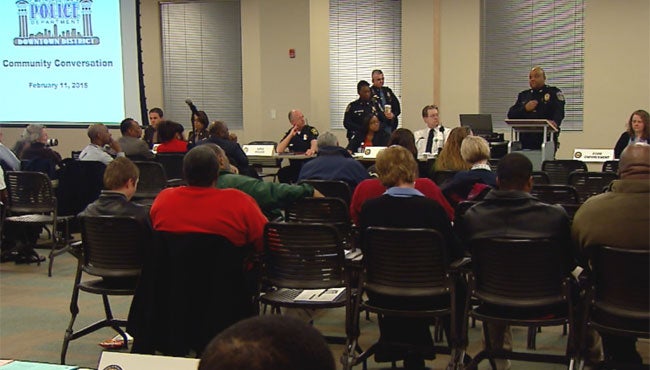 INDIANAPOLIS (WISH) – Wednesday night, IMPD held a community forum at IU Fairbanks Hall. It was held just a few hours after a truck pierced with bullet holes was spotted near the Indianapolis City County Building.

“I don’t feel safe in the city anymore like I use to. I’m concerned about the growing crime here. That is why I showed up,” said Julie Able who attended the meeting.

Others mentioned how they wanted more security added in local malls and at bus stops.

“Neighborhoods with high crime numbers should have brighter street lights and more of them,” Marie Statten who also attended the meeting.

Police at the meeting tried to calm fears and give them the information they need if they feel unsafe.

“Talking about issues is the first step in making improvements. It also helps reduce crime and fear when people know the right person to contact when a problem comes up,” said IMPD Chaplain David Coatie

Volunteers helped set tables around the room. On site, representatives from different departments within IMPD; narcotics, juvenile, traffic, gang and the homicide unit spoke with those who attended.

Each division passed out pamphlets and numbers to those who stopped by.