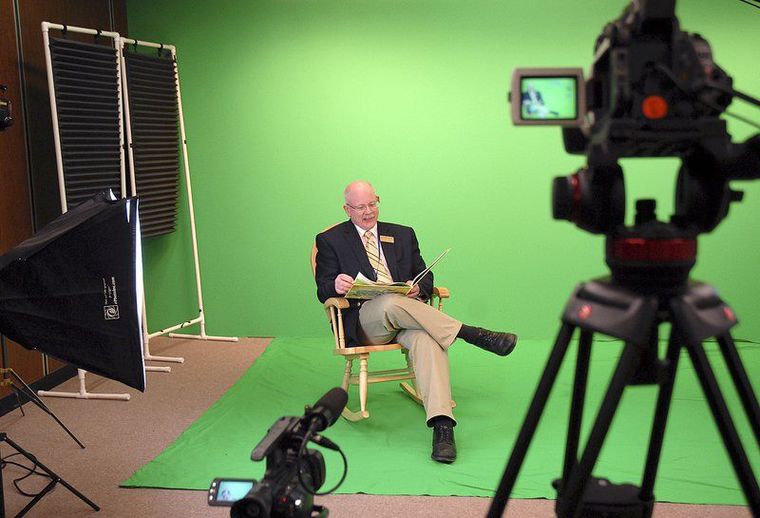 ANDERSON, Ind. (AP) – There’s nothing like a good story before bed.

They generally take about 10 minutes, and new episodes air Monday through Thursday at 7:30 p.m.

Terry Thompson, ACS superintendent, was among the early volunteer readers and selected “Oh, The Places You Will Go,” by Dr. Seuss. Anderson Mayor Kevin Smith read “See the Ocean,” by Estelle Condra.

Last week, Joe Cronk, chief operations officer for ACS, read two selections for broadcast – “Never, Ever Shout in a Zoo,” by Karma Wilson, and “How I Became A Pirate,” by Melinda Long.

“I think this is something for all of us in education need to do,” Cronk said, adding that books, especially for kids, are meant to be read out loud.

Independently, Pam Storm, Title I coordinator for ACS, had been thinking along similar lines and approached Thompson about a partnership.

When the pair met, their ideas gelled and the results can be seen nightly.

Storm can recall a time when adults regularly read books to children in school for a program called Children and Adults Reading Education, or CARE.

Although that program ended years ago, the idea was always on her mind, said Storm, a collector of children’s books.

“I’ve always thought that it was important to have adults read to children,” she said. Educators are good at teaching the mechanics of reading in the classroom.

But it’s at home, in those favorite stories read at bedtime where children can learn to love reading and rhythms and magic of language, she added.

“I think most kids who have been read to as a child remember it,” she added.

One of the advantages of the nightly broadcasts is that they can take some of the pressure off parents who may themselves not be great out-loud readers and are intimidated by the prospect of reading stories to their kids, said Erin Smith, preschool and para-educator coordinator for ACS.

Kevin Smith called the program an excellent educational tool for the city.

“We care a great deal about our children and their future. Anything we can do to support their educational outcome is of utmost importance to us,” Smith said. “We are very pleased to be partnering with Anderson Community Schools and leaders across our city to bring this series to Anderson TV.”

Information from: The Herald Bulletin, http://www.theheraldbulletin.com