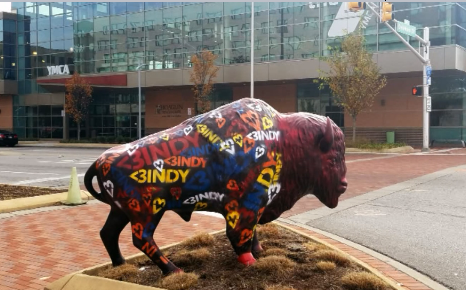 INDIANAPOLIS (WISH) — Do you know where the buffalo roams?

CityWay, the downtown development that owns the statue, planned to auction it off this year to raise money for charity.

“It is pretty crazy to be honest with you,” Parker said. “A few weeks ago we noticed he had roamed off.”

Bison statues are on display in every Indiana county. The statues are part of a public art project to celebrate Indiana’s 200th birthday.

CityWay’s bison could now be anywhere, from Indianapolis to Buffalo. Management didn’t bother with a police report.

The bison is colorfully decorated with a message: “<3 Indy.”

“We understand that if somebody did take him, it was probably just a prank or maybe because they love Indy as mug as we do and wanted to share in that spirit,” Parker said.

Parker and her coworkers are posting fliers reminding people that CityWay had big plans for the bison. Management hoped to auction the statue this year to raise money for the Buckingham Foundation.

The money would go to an initiative to fight childhood hunger.

“He became part of our community and part of our CityWay family,” Parker said. “We’re really hoping somebody knows where he is and can help him find his way back home.”CityWay employees are asking people to donate to the foundation online.