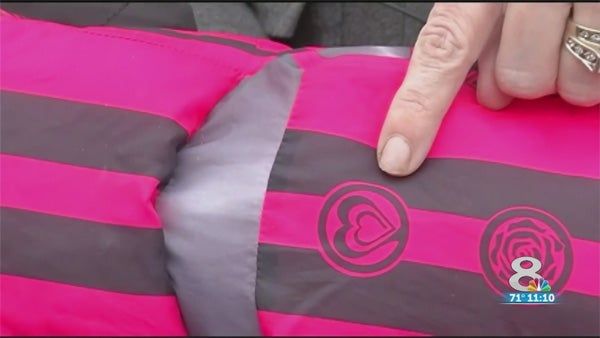 TAMPA, Fla. (WFLA) – Nicole O’Kelly couldn’t believe it when she heard the stuffed toy she bought for her daughter at Monster Jam may have a symbol meant for pedophiles.

“I’m absolutely sick. I bought this for my 2-year-old little girl. This toy was made for little girls. I wanted answers,” O’Kelly said.

When she got the answers as to why there was a strange heart symbol on her daughter’s stuffed toy truck she nearly threw up.

The souvenir recently purchased at a Monster Jam event held a sick secret; a disgusting calling card for creeps. The heart on the toy was a symbol for pedophiles.

“This is pink,” O’Kelly said. “This is for little girls, especially at a predominately male event.”

It was designed in the Tampa Bay area, at Feld, Inc.

Here’s what the heart means. When a pedophile sees children with the heart symbol, it’s a code. It means this child is ready to be traded for sex.

Pasco Detective Anthony Bassone has been with the agency for more than 16 years. He has one tough job every day. And, what he encounters, he can’t forget.

He has to see the worst of the worst. He picks out pedophiles online and busts them, along with two other detectives in the cyber crimes unit at the Pasco County Sheriff’s Office.

These investigators have to deal with the most horrendous, gut-wrenching, heartbreaking material. Sadly, they see children tortured and raped on a daily basis.

These crime-fighters make it through with their motivation to protect children and keep them safe. What drives these detectives to do their jobs and face another day, they told us, is to put the bad guys away.

The company, Feld Inc, admits they are shocked and did not realize this was going on. They have since pulled the toys from the shelves. Anyone who attended the Monster Jam event on January 16th or February 6th should contact detectives.

“We’re shocked. We had no idea. We reacted immediately. We wanted to do the right thing as quickly as possible. Clearly we’re in the business with providing high quality family entertainment. This was really obscure. Until yesterday, I had no idea there was an underlying meaning of these symbols and the deplorable behavior. We just don’t know if a crime was committed here. We have not been contacted by LEOs. We just want to make sure it doesn’t happen again,” said Stephen Payne, with Feld Inc.