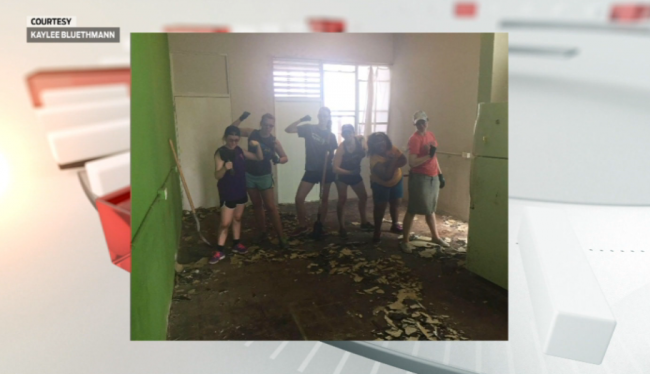 A group of 11 students and two faculty staff advisors traveled to the hurricane-ravaged island as part of the university’s Alternative Break program, an elective service-immersion experience designed to spark awareness of global needs and challenges, according to Marian administrators.

She described the week of manual labor and community outreach work as deeply fulfilling, saying she appreciated “even just the small role” she was able to play in helping people regain normalcy after Hurricane Maria. The group painted, restored and helped rebuild damaged structures, including a site that houses visiting missionaries.

“Even months after the hurricane, the amount of houses that didn’t have a roof overhead… was just like, wow,” Schweitzer said, at a loss for words.

Art Montemayor, a freshman majoring in pastoral leadership who also traveled to Puerto Rico with the group, told 24-Hour News 8 he was stunned by the scope of damage wrought by Maria.

“Driving through smaller towns and suburbs, it looked like the hurricane just happened in some places,” he said. “There were still tree branches and debris on the roads. [You] see things that you don’t expect to see.”

The widespread structural devastation stood in stark contrast to the liveliness and optimism of local residents, both students said. They described how strangers warmly welcomed them into the community and offered them home cooked meals, despite being faced with dwindling supplies for their own families.

“No one asked for help or acted like they needed it,” explained Montemayor. “There wasn’t any self-pity or anger about what happened… They’re living in the moment rather than focusing on the next thing to come or what’s happened before. Just enjoying what you have now and not taking it for granted.”

Schweitzer said witnessing how residents continued living their lives and functioning as a community during “a time where you could really fall apart and struggle” was inspiring.

“It also just really humbled me and showed me the little things that not everyone has in their life,” she added.

The group of Marian students sacrificed more than merely “the little things” during their week in Puerto Rico, going without hot water, electricity and cell phone service. Montemayor found himself enjoying the freedom from digital distraction, he said, and vowed to spend less time on his phone after returning to Indiana.

“It’s something I’m working on,” he told 24-Hour News 8. “I changed the color to black and white on my phone so it isn’t as attractive.”

“Especially in Indy, there’s a lot of homeless people I see all the time,” she explained. “Now I’m wondering, ‘What can I do to help?’”