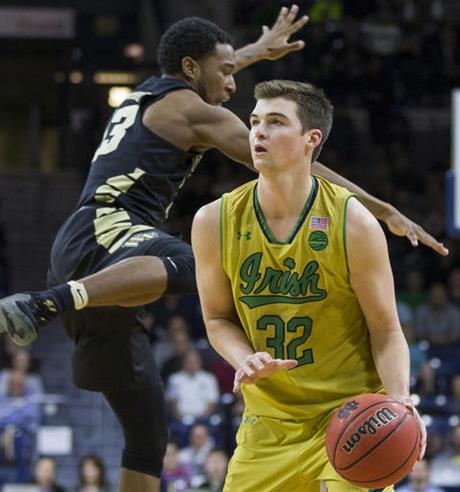 SOUTH BEND, Ind. (AP) – Bonzie Colson had 27 points and 16 rebounds Tuesday for Notre Dame, which snapped a four-game losing streak with an 88-81 win over Wake Forest.

Colson grabbed 11 of his rebounds in the second half and recorded his 15th double-double of the season. He also set a career high with five blocked shots and knocked down two 3-pointers.

V.J. Beachem added 19 points and a career-high four blocks and Steve Vasturia had 17 points and seven boards for Notre Dame (18-7, 7-5 ACC), which had lost five out of its last six and fell out of the Top 25 this week, but came back from a nine-point second half deficit.

Collins recorded his seventh straight 20-point game for the Demon Deacons, the longest such streak in the ACC since North Carolina State’s T.J. Warren had 15 in a row in the 2013-14 season.

Crawford drilled a step-back 3-pointer with one second left to end the first half and give Wake Forest a five-point lead.

That lead grew to nine after the Irish missed their first six shots of the second half, but consecutive 3-pointers by Beachem and Vasturia got them back within three.

Wake stayed close, but never led the rest of the way. Beachem, Vasturia and Matt Farrell all hit 3s down the stretch at key moments to hold the Deacons off. Farrell finished with 16 points.

Looking to change things up, the Irish went to their alternate gold-and-green uniforms, which they wore during their run to the ACC tournament title in 2015, for the first time this season.

Wake Forest: The Demon Deacons failed to win consecutive ACC road games for the first time since 2008-09, and have now lost four straight to Notre Dame.

Notre Dame: On a short turnaround after their previous game at North Carolina was moved from Saturday to Sunday in Greensboro following a water crisis in Chapel Hill, the Irish managed to get back on track with their first win since Jan. 15.

FACES IN THE CROWD

Notre Dame football coach Brian Kelly and his new defensive coordinator, Mike Elko, took in the game from the front row. Elko was hired away from Wake Forest in December.

Notre Dame: The Irish host No. 14 Florida State on Saturday.