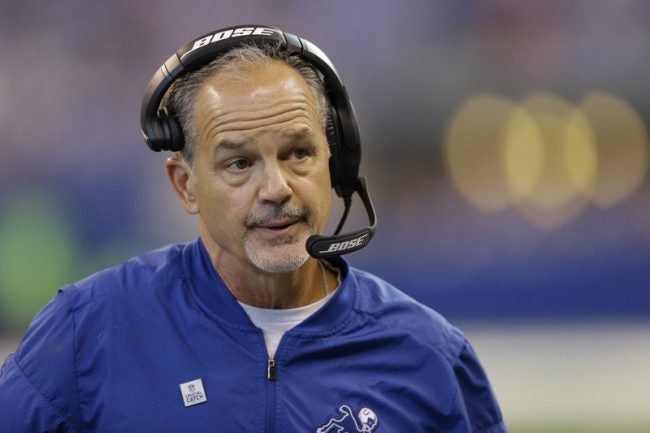 Breaking: I’ve just learned that Chuck Pagano has been released of his duties as #Colts Coach.- Anthony Calhoun (@ACwishtv) December 31, 2017

After missing the postseason for the third consecutive year, the Indianapolis Colts have fired head coach Chuck Pagano after six years at the helm of the franchise. The 57-year-old finishes his run in Indianapolis after a 4-12 mark in 2017, his first sub .500 campaign with the Colts.

Following a promising start during Pagano’s first three seasons in charge, the tables were turned during his final three seasons in Indianapolis. From 2015-17, the Colts failed to finish above .500 and missed the postseason during each campaign. Pagano posted an overall record during that span of 20-28 including a 9-9 mark against the AFC South.

The decline in 2017 resulted in the franchise’s first losing season since 2011 and only its third overall dating back to 2001.

Pagano’s first three seasons in charge of the Colts were highlighted by three consecutive 11-5 seasons and playoff appearances from 2012-14. In the process, Pagano became only the second head coach in NFL history to earn 11 wins in each of his first three seasons with a team and became the third head coach in Colts history to reach the playoffs in each of his first three years (Ted Marchibroda, 1975-77 and Tony Dungy, 2002-04). For two consecutive seasons (2013-14), Indianapolis posted perfect 6-0 records against AFC South opponents en route to back-to-back division titles.

Part of Pagano’s lasting legacy in Indianapolis dates back to his first season with the team. Pagano was forced to take a leave of absence just three games into the season after being diagnosed with a curable form of leukemia.

Serving as the team’s interim head coach, offensive coordinator Bruce Arians and the Colts rallied to a 9-3 record following a 1-2 start to the season under Pagano. As the regular season came to an end, the culmination of Arians’ stretch as interim head coach concluded with the team’s playoff-clinching victory at Kansas City (Week 16).

The stage was set for Pagano to return after missing 12 weeks of action. In the regular season finale, Pagano made his return to the sideline at Lucas Oil Stadium as the Colts defeated Houston to cap an 11-5 regular season. Indianapolis later fell to the Baltimore Ravens in the AFC Wildcard Round.

Pagano departs Indianapolis with an overall mark in regular season of 53-43 and a 3-3 record in the postseason.

Many Colts fans said they were not surprised by the decision to part ways with Pagano. They told 24-Hour News 8 it would be tough to see him go, but they think it is best for the team.

“It has been several years, we haven’t moved anywhere. It is time for a change. We’ve got a lot of great players, we need to pick up some new draft picks, but it is time to move on from this coaching staff and make a change,” said Colts fan, Harold Allen.

Others recognized the fact that Pagano had a tough year when it came to injuries.

“Andrew Luck is the key to it and he hasn’t been in the game for a little bit, so at the end of the day injuries are going to play a toll on everyone’s ability to win games and the Colts have taken a hit with the injuries right now,” said Zackery Garcia.

“It is tough to see Chuck go, but we are going to have to let him go. We don’t have an option at this point,” said Kyle Martis.