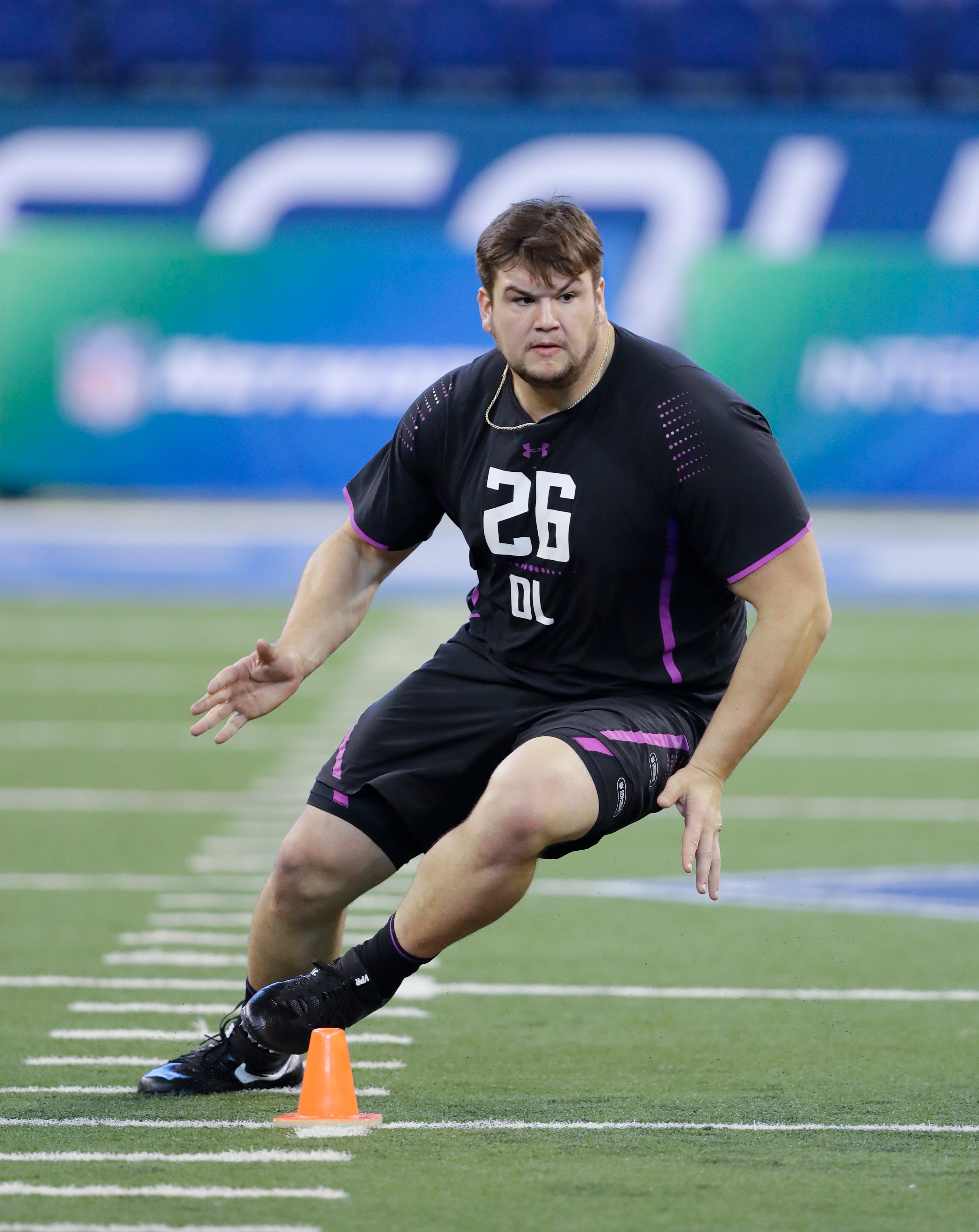 INDIANAPOLIS (AP) — Quenton Nelson made quite a first impression on the Indianapolis Colts.

He’s hoping to have the same impact on Andrew Luck.

The Colts finally gave their franchise quarterback some extra protection by taking the Notre Dame guard, the highest-rated offensive linemen in the NFL draft, with the sixth overall pick on Thursday night. He is the first guard selected in the first round by Indy since Ron Solt in 1984.

“I would say that I’m a very nasty offensive lineman who wants to finish every play whether it’s in the run game or the pass game,” Nelson said. “I want to work together to have the best offensive line in the league and protect one of the best quarterbacks in the NFL.”

He’s the first guard to be selected in the top six in more than two decades, and it didn’t take the 6-foot-5, 330-pound Nelson long to convince the Colts he was worthy of it.

General manager Chris Ballard said he watched Nelson play once last season, against Miami. But because of an extended coaching search and the transition to a new staff, Ballard only made it to one pro day — in South Bend in March.

He spoke with Nelson after the workout, then headed home to explain to his staff why he thought Nelson was ahead of his college teammate, tackle Mike McGlinchey, who was taken by San Francisco at No. 9.

“You could just feel it,” Ballard said as he struggled to explain the sensation. “I could feel it when I watched Adrian Peterson coming out. It was the same thing with Dez (Bryant). You can just feel it sometimes. With Quenton Nelson, it was the same way.”

Back at team headquarters, others concurred.

Perhaps that explains why Ballard was willing to trade back three spots and then turned down another offer to move back. Ballard didn’t say which team made the offer, but just minutes after NFL Commissioner Roger Goodell announced Nelson’s name Buffalo traded up from No. 12 to No. 7.

“My first impression is that this is the best offensive lineman I’ve seen coming out in a while,” he said. “His ability to pull is so far greater than anything we’ve ever seen.”

Nelson also fills a huge need for Indy as Luck attempts to come back from a shoulder surgery that kept him out for the entire 2017 season. In 70 career starts, Luck has been sacked 156 times and taken 691 hits — the highest total in the league over that span according to the NFL. Last year, Indy allowed 56 sacks.

Pass protection hasn’t been the only problem.

As Indy played musical chairs with the interior line for most of the past six years, the Colts have produced just one 1,000-yard rusher in that time and last season the Colts averaged 3.7 yards per carry.

Indy also lost its top rusher from the past three seasons, Frank Gore, in free agency.

The bigger question continues to be Luck, who not thrown a regulation football since returning from rehab in Europe late last year.

But if Luck makes it back, Nelson’s presence should certainly help him stay upright.

He was a second-team All-American last season and one of four finalists for the 2017 Outland Trophy, which is awarded to the nation’s best interior lineman.

“I definitely feel like I can come up and start from Day 1,” said Nelson, who watched the draft from his family’s lake home less than a three-hour drive from Lucas Oil Stadium.

The Colts are banking on it.

“He has everything we want. He’s tough, passionate, he loves the game,” Ballard said. “He’s nasty, he’s tough and his football character is off the charts. He’s got unique size and bend and straight power.”

Indy had eight more picks over the final two days of the draft including four Friday — three in the second round and one in the third.