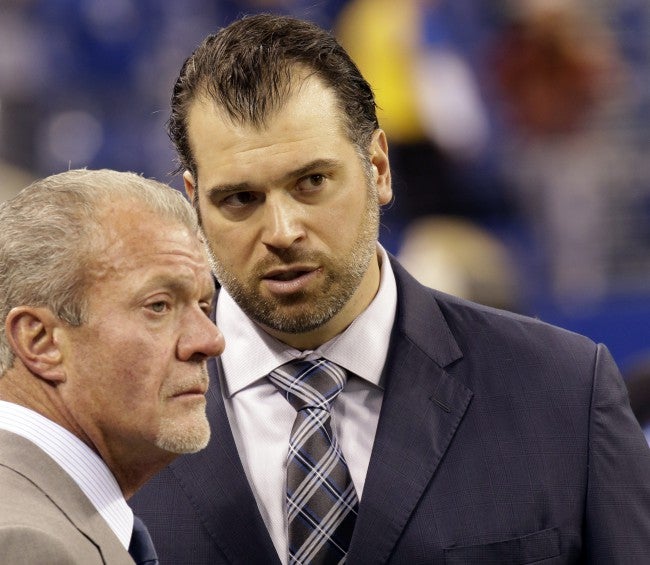 INDIANAPOLIS (AP) – Ryan Grigson will go anywhere and do practically anything to find football players.

His global view has taken Indianapolis Colts’ scouts to different pro leagues, college campuses of all sizes, regional combines, American basketball courts and even African rugby fields. Three seasons into his first gig as a general manager, Grigson believes this will be blueprint of the NFL’s brave new world.

“I think the guys that sit on their hands, they’ve got to live with themselves and look in the mirror and realize they didn’t take any chances,” he said. “They’ve got to look at themselves and say, ‘Did I even deserve this opportunity?’ If you just sit on your hands and say, ‘I’m going to play it safe all the time,’ you might be middle of the pack. But if you don’t take a swing, you’re never going to hit it out of the park.”

During his brief tenure in Indy, Grigson has presided over four major moves – the release of Peyton Manning, the decision to draft Andrew Luck instead of Robert Griffin III, one high-profile trade for cornerback Vontae Davis in 2012, which worked out, and one blockbuster move for Trent Richardson, which did not.

So when the NFL’s annual scouting combine kicks into high gear Wednesday, Grigson will continue looking for players who will fit into one of the league’s most unique locker rooms.

Indy’s current roster includes four players from the CFL, two of whom attended Canadian colleges; a long snapper who developed his skills in the United Football League and af2, a lower level arena league; an Arena Football League veteran; a quarterback who spent part of his childhood in Europe; linebackers from Germany and Africa; and a kicker who started his career in Amsterdam.

The Colts have at least two players from every American college football division, FBS, FCS, Division II, Division III and NAIA, an American soldier and two converted college basketball players, one of whom never played organized football until last spring.

He points to the 2013 draft, when linebacker Bjoern Werner of Germany and defensive linemen Ezekiel “Ziggy” Ansah of Ghana, Margus Hunt of Estonia and Star Lotulelei of Tonga were all selected among the top 53 picks. This year’s international contingent includes Nigerian-born Tayo Fabuluje and Bahamian native Jean Sifrin.

“It could be soccer, it could be handball, it could be someone in the gym that hasn’t found a sport,” Wiking said. “You also find people who have not been into sports for various reasons, who are attracted to our sport.”

Former Dallas Cowboys executive Gil Brandt, who now works for NFL.com, was one of the key innovators in the 1960s and 1970s. He found players in all sorts of places – Europe, Australia, on national caravans and landed players from other sports. The Cowboys routinely brought 120 players to training camp, started workouts as early as July 2 and when they couldn’t keep everyone, traded them.

The Grigson doctrine, Brandt believes, is a logical extension of what he did all those years ago.

“I think Ryan is a lot like me,” Brandt said. “I didn’t have to go on scouting trips because I had scouts I trusted. I enjoyed it. I think he probably understands now how his guys grade football players. He may tell them what to look for.”

Though Colts owner Jim Irsay won’t say how much money he pours into scouting, he acknowledges player costs top $1 billion every six or seven years and that’s despite saving some cash because the combine is in his own backyard. Unlike some penny-pinching owners, Irsay insists his investment has been worth every penny.

“You understand why you want the ability to drill down and find talent,” said Irsay, a former GM of the Colts. “I make sure I don’t have wasted costs, but I also want to make sure we have the resources for greatness.”

With Irsay’s support, Grigson has been able to guide Indianapolis to the playoffs three straight years and turned his unconventional philosophy into a blueprint for success.

“Coach Andy Reid hit me with something, it was even before I had furniture in my (Colts) office. He said, ‘Grigs, just be yourself,'” he said. “I think that kind of let loose the creative juices. I was just kind of like, ‘OK, people haven’t done this before and gone about things this way’ and who cares? I was going to blaze my own path.”