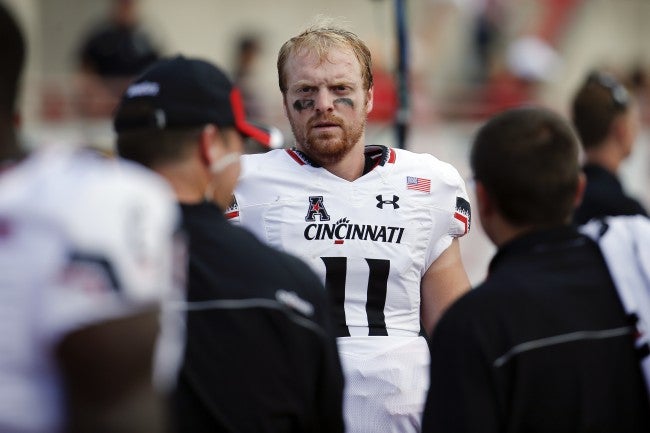 MEMPHIS, Tenn. (AP/WISH) – Cincinnati quarterback and Columbus, Indiana native Gunner Kiel was injured on a high hit in the first quarter of the Bearcats’ game against Memphis on Thursday night.

Kiel turned up field to run on a third-down play and was hit from the side by defensive back Chauncey Lanier.

“Under evaluation at the hospital. Awake. Talking. Everything is coming back normal,” Bearcats sports information director Ryan Koslen said in an email message to The Associated Press.

Kiel’s neck and head were immobilized and he was taken off the field on a cart. He was seen talking with medical personal, and was taken to Methodist University Hospital.

Prior to his time in Cincinnati, Kiel played for Notre Dame. He graduated from Columbus East High School in Columbus, Indiana in December 2011.

Lanier was initially called for targeting, but a video review showed it was shoulder-to-shoulder contact and Lanier remained in the game.

Kiel returned for the game Thursday after sustaining what was initially diagnosed as a mild concussion Saturday when his head slammed into the ground in Cincinnati’s victory at Miami of Ohio. Miami’s Bryson Albright was called for roughing the passer on the play.

Coach Tommy Tuberville said Tuesday that the quarterback had some soreness in his neck, but had improved and was cleared to play.