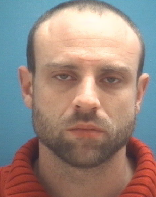 COLUMBUS, Ind. (WISH) – A Columbus man was arrested after police said he pointed a rifle at a neighbor during a dispute Friday.

Columbus police responded to the 1400 block of Pearl Street after 30-year-old Arthur Daniels confronted a man about video recording a fight involving neighbors.

Witnesses told police that Daniels threatened the neighbor with a hunting rifle.

Daniels was located by officers nearby a short time after they arrived to the scene. Officer Jeremy Jones and his K-9 partner Max located the rifle inside an open shed in the 1500 block of Chestnut Street.

Daniels was placed under arrest on a 48-hour hold and remanded to the Bartholomew County Jail. He is facing preliminary charges of intimidation with a deadly weapon, possession of a controlled substance and a Jennings County arrest warrant.