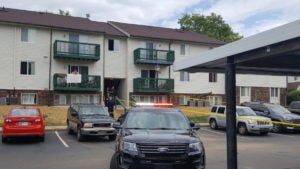 COLUMBUS, Ind. (The Republic/WISH) — Police in Columbus are investigating a Sunday afternoon shooting.

A man was shot multiples times inside an apartment in the complex, according to Sgt. Matt Harris, Columbus Police Department spokesman.

Police say family members drove the victim to Columbus Regional Hospital, about six blocks north of where the man was shot.

A suspect, who was not identified on Sunday, was taken into custody at the apartment.

This incident remained under investigation on Sunday.