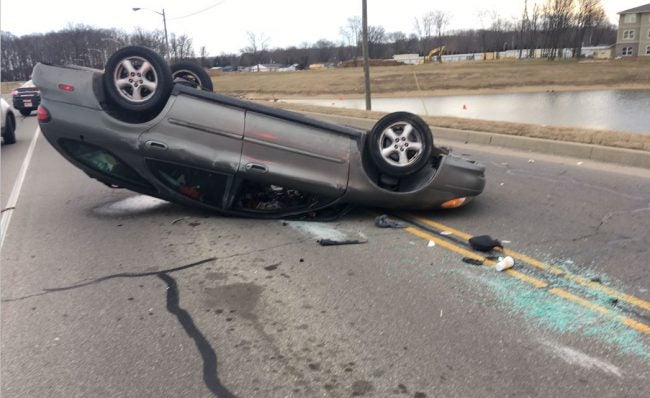 COLUMBUS, Ind. (WISH) –Talk about back firing, a driver in Columbus who police say harassed a teen during a fit of road rage, crashed and flipped his car. He’s ok, but now faces criminal charges.

It happened Thursday morning at the intersection of State Street and Marr Road.

Police say the teen, who is a student at Columbus East High School, said Wynn may have gotten upset when he tried to make a dangerous pass and she honked at him.

Columbus resident Jack Franklin said he had been driving behind the two cars that were involved for more than a mile. Even before the car flipped, he called 911 because he sensed something bad was about to happen. He was right. Franklin witnessed the crash, but the fit of rage didn’t end there.

Franklin says he watched the aggressive driver try several times to pass the other car driven by a teen. He says the driver dodged oncoming traffic, narrowly avoiding a head on collision. But his luck at the wheel came to an end.

“It kind of hit the car at an angle. He jerked the wheel and the car just flipped over real easy, rolling until it stopped, smashed the top in. The windshield broke out. The side window broke out,” Franklin described.

Columbus Police shared video of the aftermath. Not even flipping his car could calm down the road rage driver. Franklin says, he pulled over thinking the belligerent driver might need medical attention. He was wrong.

“He got out mad. He got out, stood up, fist tight, running over toward the guy that got out of the passenger car. I thought there was going to be something going on,” he said.

But before anything could happen, police arrived. Investigators believe in a fit of rage, 52-year old Jerry Wynn Jr. caused the crash by intentionally slamming on his brakes while driving in front of an 18-year old woman.

“It could definitely be a lesson to other persons out there. Whether you have a disagreement with others on the road, sometimes it’s just best to let it go rather than pushing the issue. Because you just don’t know where it’s going to end up at,” said Lt. Matt Harris of the Columbus Police Department.

In this case, it ended with the aggressor flipping his car onto its top.

“I consider he got what he deserved for doing what he did,” said Franklin.

There were no injuries reported, however, EMS crews did take Wynn to the hospital to be checked out. He was released soon after. Police cited him for reckless driving and aggressive driving. His case will be handed over to the Bartholomew County Prosecutors Office.