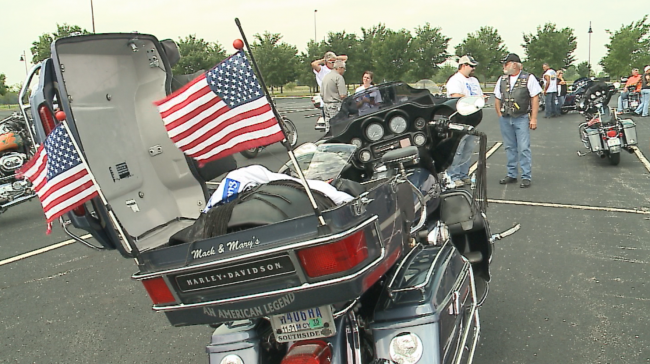 FRANKLIN, Ind. (WISH) – There were 150 bikers that rode their motorcycles Saturday to raise money in memory of two teenagers being hailed heroes.

Jason Moran and Michael Chadbourne died in June 2014, after jumping into the Big Blue River in Edinburgh to save their friend Sarah McLevish, who went into the dam.

There were two other boys, Mark Nally and Trent Crabb, that also jumped in the water to help her but were able to make it back to safety.

Sarah survived, but is now confined to a wheelchair and is unable to speak.

“They’re my heroes. Without them I wouldn’t have Sarah,” said Sarah’s mother Bobbi Jo Hubbard. She added, “They were so close and they cared about each other. They weren’t going to let one of them go.”

Christina Snow, co-owner of Time Out Bar and Grille, said, “Oh, my heart was broken. I just felt for the families and everybody who was involved. It was just sad.”

The bikers met at Franklin Community High School Saturday afternoon before riding to Time Out Bar and Grille.

Once there, the bikers enjoyed food, raffles and auctions. All of the money raised is for a scholarship that has been created to honor Moran and Chadbourne.

Organizers plan to make the benefit an annual event. For information about the scholarship, organizers said those interested should contact the principal of Franklin Community High School.