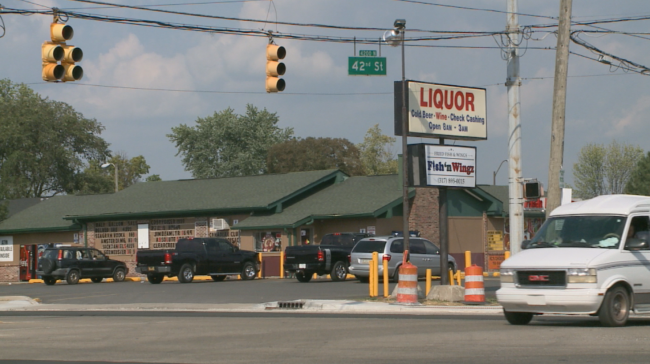 INDIANAPOLIS (WISH) – It’s been almost one year since the Department of Public Safety launched its latest crime-fighting plan, zeroing in on six of the most challenged areas in Indianapolis.

One of those neighborhoods is the area around East 42nd Street and North Post Road. 24-Hour News 8 has been digging into the focus area to see what changes it’s been through over the past eleven months.

Officers and people who live in the area said they aren’t just fighting the actual crime – they’re battling the area’s long-standing reputation as a hotbed for drugs and violence. Now, they hope that will finally start to turn.PROGRESS AT 42ND AND POST

Every day Ron does his best to pick up the pieces of his neighborhood. He hopes to create a bright spot near 42nd and Post, where he’s lived for decades.

“We try to clean up after everyone, and make our community look nice,” Ron said. Ron didn’t want us to reveal his last name.

Whenever he can, Ron picks up pieces of trash that litter yards and driveways on his street.

“It’s tough on the east side right now, but I think it’s getting better. We just pray that everybody can get along and (for) no violence,” said Ron.

The Indianapolis Metropolitan Police Department has upped its efforts to clean up the east side since last October, when it named 42nd and Post as a focus area. Ron has noticed a difference.

“I see their patrols, and they’re in the neighborhood … that’s what we want to see,” said Ron.

“42nd and Post has been an area that suffered from violent crime – all kinds of crime for many, many years,” said Bruin.

Police say in the first eight months of the year, there has been one homicide in this focus area. That’s down from two in 2014 and seven in 2013. Through August, officers arrested about 250 people within the 42nd and Post neighborhood. But Commander Bruin doesn’t want to focus on the statistics.

Bruin says officers had been holding back in this focus area for much of this year.

“We didn’t hit that area really hard at first, because of Operation Smoke Show. We didn’t want to cross into what they were doing,” said Bruin.

Operation Smoke Show ended with a raid July. 525 officers from IMPD, Indiana State Police and the Federal Bureau of Investigations arrested more than 50 gang members, who officers say were responsible for most of the violence and drug problems on the far east side. Bruin told 24-Hour News 8 the FBI called it one of the biggest raids they’ve ever seen.

Now, IMPD is taking a more aggressive approach at 42nd and Post – but that might not last long.

“I think this one is really close to moving in a direction that all we’re really going to do is monitor it,” said Elder.

“I can tell you, there’s a definite improvement if you go back about five years. Just physically driving through that area you see some real improvements,” said Bruin.

Elder said the Department of Public Safety, the mayor’s office and IMPD will re-evaluate the focus areas at the one-year mark in October.

“Have we made enough progress in one area that it’s getting better and it’s more of a monitoring instead of a focus? Will we go back to another focus area or find another area to focus on?” said Elder.

As they make that decision, officers say the game-changer at 42nd and Post has been people like Ron  members of the community who have embraced the focus area philosophy.

“What you need to start the whole process is neighbors watching neighbors,” said Ron. “If one person starts, other people will start and help.”

IMPD agreed that the support of the community is key.

“We aren’t staffed up enough to be everywhere at once, and we really rely on the community to be our eyes and ears,” said Bruin.CHILDREN AND TEENS LIVING NEAR 42ND AND POST

There is one factor police said separates the 42nd and Post focus area from all five of the others.

Officers said the 42nd and Post area is filled with children — a higher concentration of kids than any other focus area. But there are few organized activities for those kids, and that’s led them to trouble.

“The one thing I’ve noticed different from the other five focus areas is the large number of juveniles that are or were locked up in the 42nd and Post focus area,” said Elder, “Usually the first time (teens get in trouble) it’s a smack on the hand. Even if they file charges, sometimes they’re diverted out. There’s no fear there. ‘(Teens think) nothing happened. I can get in trouble,’ and there’s the sense that juveniles aren’t going to get punished as severely as adults,” said Elder.

Commander Bruin said East District officers have a window to reach teens now that the Block Burners gang has been dismantled.

“We’re really aware of trying to stop that vacuum that the Block Burner takedown left, from being filled by another criminal organization,” said Bruin.

A new criminal organization will advertise a lifestyle filled with cash and quick highs, presenting a temptation to teenagers who don’t see another way out.

“We’re not going to be able to arrest our way out of these problems; they’ve been going on for years, decades, generations — and it’s going to take an entire community to fix the problem,” said Elder.A COMMUNITY WORKING TOGETHER TO REACH TEENS

Community Alliance of the Far Eastside, or CAFE, is bringing hope to the neighborhood by working to get people the financial, social and health care assistance they need.

“There’s a lot of public housing there, there’s some distressed properties in that area. There are low education rates, low employment rates – and so there are a lot of social problems that manifest themselves in the area,” said CAFE executive director Melissa Drew. “It’s not just about policing and locking folks up. It’s about addressing those issues that are causing them to be in the system to start with.”

“Thirty-eight (percent) of our population on the far east side is under the age of 18, so that’s a lot of kids who need something positive to do,” said Drew.

Andria Valentine is doing her part to fill the gap. Valentine works at CAFE and lives on the Far Eastside.

“I see some activity that can stem to some serious violence. I see a lot of children in that area who could use some mentoring,” said Valentine.

The same kind of mentoring changed her life. Less than two years ago, Valentine was a client at CAFE. She was underemployed and desperate for a full-time job. CAFE helped her find one, and now she works with teens at the center every night.

“They always know they can always talk to me about different issues,” said Valentine.

Valentine said she sees herself in the young ladies she mentors. She also knows they represent the future of her neighborhood.

“More people should get involved with the youth and try to help them … and save them from issues they shouldn’t go through,” said Valentine.

Workers and volunteers at CAFE are looking forward to a brighter future on the far east side.

“There’s a lot of positive happening in the far east side right now … I’m very excited about where our community is headed,” said Drew.

Drew is specifically looking forward to the Finish Line Boys and Girls Club, currently under construction. Next spring, it will open next to CAFE at 38th and Post. CAFE and IMPD say it will make a big difference on the far east side, because every day 250 more kids will have a safe and productive place to spend their time.

“We’d be lost without the community support up there,” said Bruin.

IMPD East District also has several programs to reach teens, including its chess club and Juvenile Justice Jeopardy. The programs allow teenagers to spend their downtime in a safe place and learn to develop healthy relationships with officers.