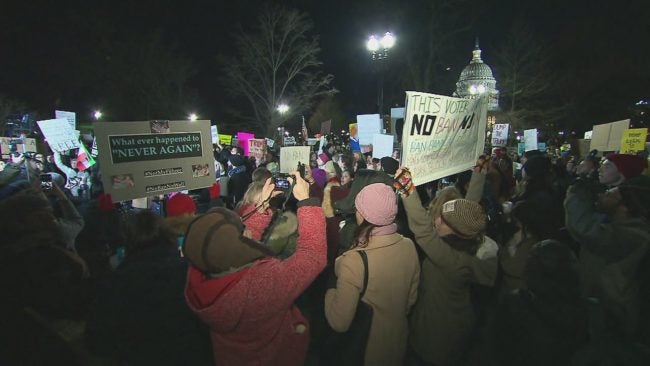 The CEO of Salesforce sent an email to all employees addressing concerns over the executive order. Salesforce is based in San Francisco, but the company is planning to expand in Indianapolis.

President Trump signed the executive order last week sparking protests and outrage among some people, including CEOs of major companies.

“This was an unusual election somewhat controversial and as a result people have strong political feelings,” said Bill Rieber, economics professor at Butler University.

Rieber is providing some insight from an economics and marketing standpoint.

“They have strong political views and they want to make them felt and that’s fine they have a pulpit in which they can make themselves quite easily because they’re powerful individuals,” said Rieber.

It was just over the weekend, when the CEO of Salesforce tweeted a message with the hashtag no ban. Other companies, like Starbucks, Lyft, Uber, Apple, and Google have also expressed similar concerns.

The Trump administration is restricting people from entering the U.S. from seven Muslim majority countries.

“It is somewhat disruptive though for the company if some of their employees can’t move about and will be disruptive for individauls who were planning to come here on a visa or to stay,” he said.

But whether a company chooses to take a public stance, Rieber doesn’t believe it’s going to have much of an impact on consumers.

24-Hour News 8 reached out to the Indy Chamber for a comment on the president’s executive order. A spokesperson said they had no comment.