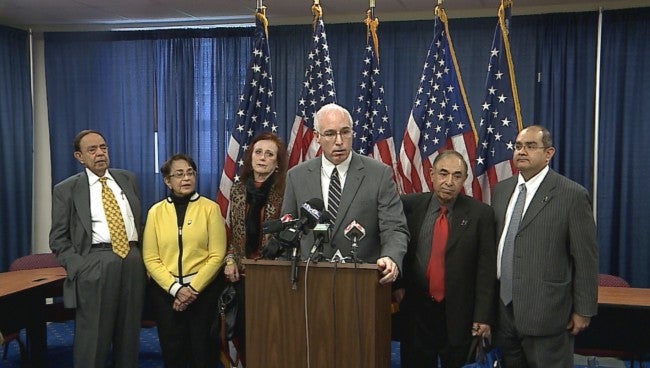 INDIANAPOLIS (WISH) — One of the most conservative politicians in the state stood with Muslim Americans Tuesday morning.

“The reason we are here today is to stand up and do the right thing,” said state Senator. Mike Delph (R-Carmel).

In a statehouse news conference, Delph spoke out against recent calls from leading presidential candidates to ban all Muslims from entering the country.

Those calls came in the wake of terror attacks linked to Muslim extremists in San Bernardino and Paris, but Delph says there are hard-working Muslims right here in Indiana, and he says much of the rhetoric isn’t helping anyone.

“I thought it was important for a Christian, conservative, Republican to stand up with my friends,” said Delph.

The news conference was in stark contrast to recent Muslim extremist attacks played out in San Bernardino and Paris.

Following the most recent attacks, Republican front-runner Donald Trump has called to put an end to all immigration by Muslims.

Trump was never mentioned by name during the news conference, but it was suggested he clarify his language to only refer to terrorists.

“If he does mean that we need to start treating Muslim American citizens differently than we treat every other American citizen, then I absolutely uncategorically reject that. It’s un-American. It’s not right,” said Delph.

Delph said he wants to start a dialogue. The Muslims standing next to him said they hoped to be looked at as neighbors instead of enemies

“This is the first step as far as I’m concerned, meeting with you guys and talking to it. And the next step is to go your neighbors and say, ‘hey I’m a Muslim and I’m a good person,'” said Dr. Saad Khairi.

Governor Pence, as you may recall, attempted to ban Syrian refugees from settling here after the Paris attack. He also was never referred to by name, but Delph said he has plans to address the governor’s concerns, but said he won’t elaborate until the legislative session begins in January.