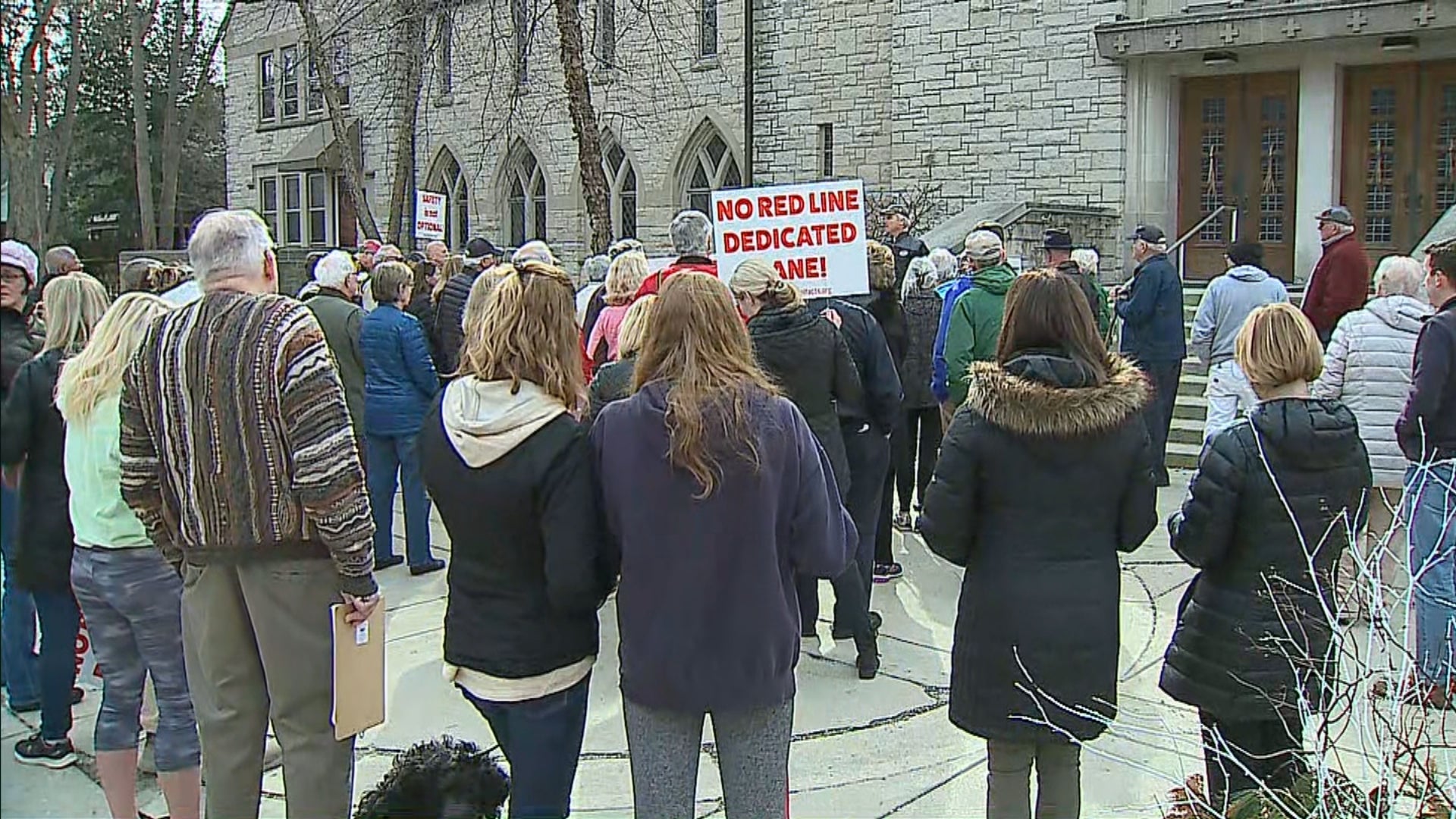 The group of more than 40 people rallied at the intersection of East 57th Street and Central Avenue. Protesters held picket signs that read “No red line dedicated lane!” in red letters.

Their frustration with the $96 million Red Line bus rapid transit project — one component of the larger Marion County Transit Plan created by municipal corporation IndyGo — stems primarily from the potential safety impact of the dedicated bus lane, they said.

The 13-mile Red Line route will run from Broad Ripple through downtown Indianapolis to the University of Indianapolis, and connect 50,000 residents with nearly 150,000 jobs, according to IndyGo.

The Red Line will operate 20 hours a day, 7 days a week, with buses arriving every 10 minutes.

Nearly half the route allows for mixed traffic lanes; only 60 percent of the Red Line design calls for the construction of a dedicated bus lane.

“Between the bus station and the bus lanes on either side of the station, the ‘dedicated lane’ will take up three travel lanes on College Avenue,” said Lange. “That puts [car] traffic in [what is currently] the parking lane, which means traffic will be whizzing by less than 10 feet away [from pedestrians].”

The reduction of travel lanes would divert an estimated 10,000 vehicles every day from College Avenue to surrounding neighborhood streets, she added, citing a November 2017 traffic study.

The alternative proposed by Broad Ripple residents mirrors the design plan along other portions of the Red Line route.

“What we want is removal of the dedicated lane design,” Lange said. “Put the stations on the side of the road, like what’s happening at 66th Street and all along the rest of the bus line route that does not have dedicated lanes.”

The federal grants funding the majority of the project do not explicitly require the construction of a dedicated bus lane.

Protesters at Tuesday’s rally called on Mayor Joe Hogsett to step in and address their concerns with IndyGo’s seven-member Board of Directors before Red Line construction along College Avenue progressed “to the point of no return.”

“I was thinking we should all go lay down in potholes,” a rally leader said to the cheering crowd. “And if [the mayor] comes for a photo op, we just pop out of the potholes and say, ‘Take out the dedicated lane, Joe!'”

Hogsett would be remembered as “Red Line Joe” if he allowed the project to progress as planned, Lange said.

A spokesperson for the mayor directed questions from News 8 to IndyGo. The municipal corporation is under the control of the City-County Council, not the Indianapolis mayor’s office, she said.

Chuck Mack, the longtime owner of Moe & Johnny’s at the corner of East 54th Street and College Avenue, said he felt “betrayed” by elected officials who had vowed to represent the interests of their constituents but failed to address their Red Line concerns.

Opponents of the dedicated bus lane had discussed the possibility of taking legal action, he told News 8.

Lauren Day, a spokesperson for IndyGo, emailed a statement to News 8 in response to requests for comment:

“IndyGo is committed to improving transit throughout Marion County, and the Red Line is a key part of a reliable and frequent system. The Marion County Transit Plan was developed by working with international transit experts to create the most efficient and safest design for each block of the 13-mile Red Line, and the public was involved every step of the way. The Red Line route will connect nearly 50,000 residents and 150,000 jobs. More than half of the 13-mile rapid transit line will travel in dedicated lanes, an essential part of reliable and frequent service.”