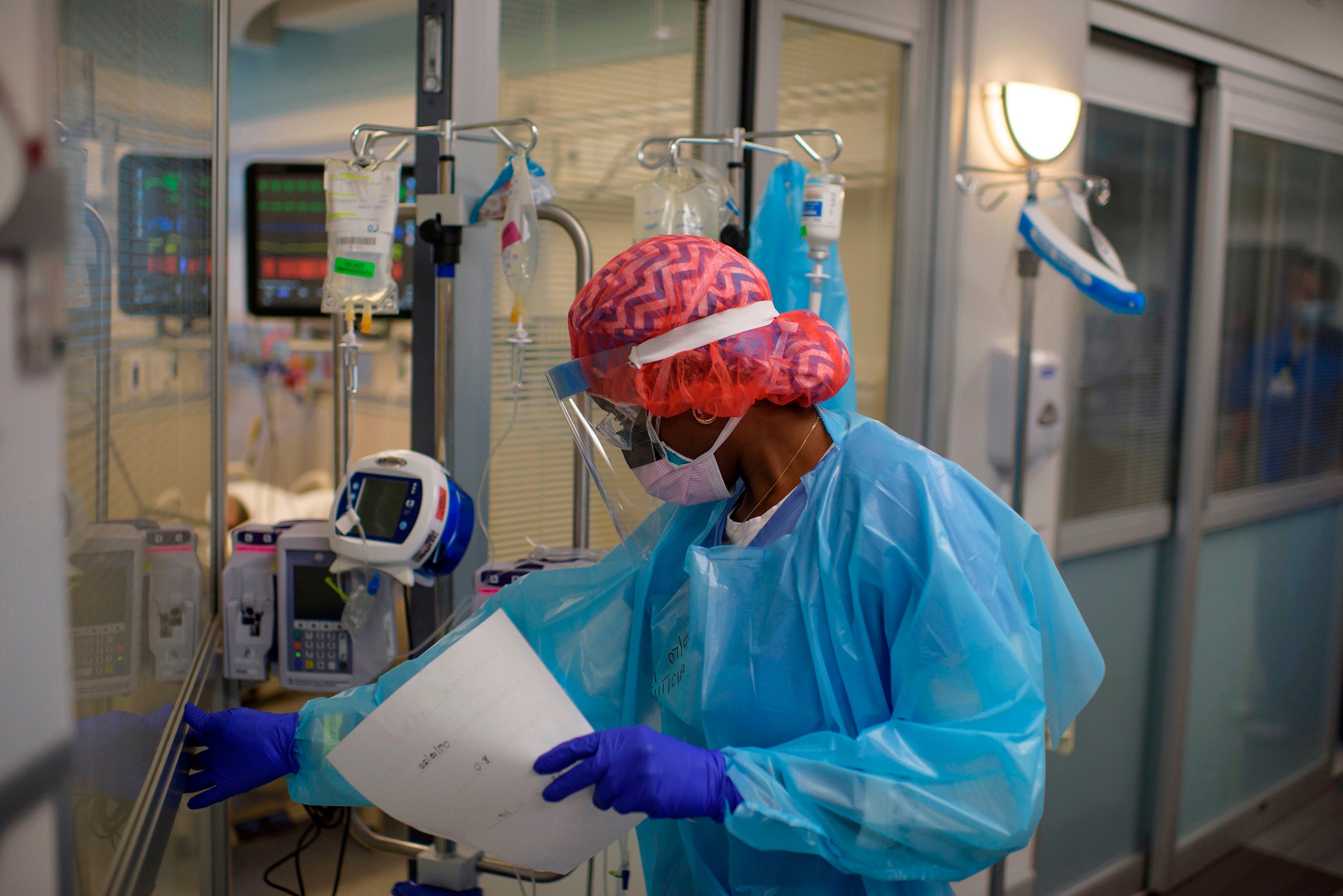 Registered Respiratory Therapist Niticia Mpanga walks into a Covid patients room in the ICU at Oakbend Medical Center in Richmond, Texas, on July 15, 2020. - The latest modeling projects the number of COVID-19 deaths in the US to increase further, even as one research team suggests the near-universal use of masks could save 40,000 lives between now and November (Photo by Mark Felix / AFP) (Photo by MARK FELIX/AFP /AFP via Getty Images)
by: Christina Maxouris and Holly Yan, CNN
Posted: Jul 22, 2020 / 04:20 PM EST / Updated: Jul 22, 2020 / 04:20 PM EST

(CNN) — The US is heading in the wrong direction with Covid-19 numbers, and it’s doing so with astonishing speed.

Just after 1,000 people died in a single day, the country is about to reach 4 million Covid-19 cases.

To put that in perspective, the first reported case came on January 21. After 99 days, 1 million Americans became infected.

It took just 43 days after that to reach 2 million cases.

And 28 days later, on July 8, the US reached 3 million cases. The 4 millionth case could come just two weeks after that.

As of Wednesday morning, more than 3.9 million people had been infected across the US, and more than 142,000 have died, according to data from Johns Hopkins University.

Some states are reporting record-breaking numbers of new cases. More governors are requiring masks, and dozens of hospitals are out of ICU beds.

At least 27 states have either halted or rolled back their reopenings to try to get a grip on the virus.

For the first time in three months, President Donald Trump gave a public Covid-19 update from the White House briefing room Tuesday and said his administration is “developing a strategy.”

He said the pandemic will likely “get worse before it gets better,” echoing earlier predictions made by the US Centers for Disease Control and Prevention.

Last week, CDC Director Dr. Robert Redfield said the fall and winter will likely be “one of the most difficult times that we’ve experienced in American public health.”

Some good news on the vaccine front

Several vaccine trials are progressing well, and researchers say a vaccine might be publicly available by early 2021.

And any Covid-19 vaccine that’s sponsored by the US government will be free or affordable for the American public, Health and Human Services Secretary Alex Azar told CNBC on Wednesday.

“For any vaccine that we have bought — so for instance the Pfizer vaccine — those hundred million doses would actually be acquired by the US government, then given for free to Americans,” Azar said.

He said the same would apply with the AstraZeneca and the Novovax vaccines.

“We will ensure that any vaccine that we’re involved in sponsoring is either free to the American people or is affordable,” Azar said.

And while some anti-mask protesters refuse to wear a piece of cloth to help save American lives, enormous signs of altruism have emerged.

More than 100,000 people have volunteered to participate in Covid-19 vaccine clinical trials, said Dr. Anthony Fauci, director of the National Institute of Allergy and Infectious Diseases.

“You’re talking about tens and tens of thousands of people that will be needed for these multiple vaccine trials,” Fauci said during a webinar Wednesday with the TB Alliance.

“I think we’ll be fine with regards to getting enough people.”

Where cases are surging

Some politicians, including the President, have insisted that much of the soaring case numbers are a reflection of increased testing.

But the surge is new cases has greatly outpaced the increase in testing, with troubling rates of transmission and test positivity in many states.

A CNN analysis of testing data from the Covid Tracking Project reveals the positive test rate — or the the average number of positive test results out of 1,000 tests performed — has increased significantly in many of the current hotspots, including Florida, Arizona, Texas and Georgia.

Florida saw an average rate of 35 positive results per 1,000 tests during the month of May. But in June, that number nearly tripled to 105. So far in July, the average rate of test positivity has been 187 out of 1,000.

But Florida Gov. Ron DeSantis said the state is on the “right course” in the fight against the virus.

“I think we will continue to see improvements,” the governor said Tuesday. “We just have to, particularly Floridians, have to continue doing the basic things.”

Over the weekend, nearly 50 Florida hospitals said they were out of ICU beds. Statewide, the ICU bed availability had dwindled to 15.98% on Tuesday, down from about 18.1% on Monday.

And new data from the CDC also show infections could be more than 10 times higher than the number of reported cases in some parts of the US.

Track the virus in your state and across the US

Researchers estimate the US will have 219,864 total Covid-19 deaths by November 1, according to the Institute for Health Metrics at the University of Washington.

That’s actually a decrease of about 5,000 deaths from the IHME’s previous forecast of 224,546 by that date.

“So a mandate is very important and helping, and a national mandate, of course, would do much better,” said Ali Mokdad, a professor of health metrics sciences at the IHME

While at least 39 states have some time of mask requirement now in place, some officials have not mandated masks.

Iowa City Mayor Bruce Teague made masks a requirement in public places and in outdoor places when social distancing isn’t possible — defying the state’s governor who says cities have no authority to put mask mandates in place.

“The scientific data and evidence is clear. Face coverings and masks are a safe, effective way to get case numbers down,” the mayor said.

These are the states that require masks

Young people are fueling the spread in LA

California, the first state to shut down months ago, seemed to get Covid-19 under control — only to suffer a massive resurgence, now surpassing New York with the most coronavirus cases in the nation.

This month, the governor shut down bars and indoor restaurant services again due to an influx of cases after reopening.

In Los Angeles, the number of daily hospitalizations hit a new high for the fourth time in a week Monday.

On Tuesday, Los Angeles County officials said young people were driving the spread of the virus, with 57% of new cases reported in people under 41 years old.

Los Angeles Mayor Eric Garcetti told CNN earlier this week he was on the “brink” of issuing another stay-at-home order for the city, urging residents to avoid gatherings.

With the high transmission levels of the virus, traditional contact tracing has now become “impractical and difficult to do,” California Health Secretary Mark Ghaly said.

The state is working to refine strategies and continue to work with counties to build up their “tracing army,” but Ghaly warns that “even a very robust contact tracing program will have a hard time reaching out to every single case.”

Contact tracing is now harder all over the nation while testing results take days, Fauci said.

Quest Diagnostics, a leading commercial testing lab, said in a news release Monday that for some patients, testing results can take up to two weeks.

“The time frame from when you get a test to the time you get the results back is sometimes measured in a few days,” Fauci said Tuesday.

“If that’s the case, it kind of negates the purpose of the contract tracing because if you don’t know if that person gets the results back at a period of time that’s reasonable, 24 hours, 48 hours at the most … that kind of really mitigates against getting a good tracing and a good isolation.”

Uncertainty about this school year

With the start of the school year just weeks away, many families are in limbo about how children will learn.

Trump has said he’s pressuring governors to reopen schools and has threatened to cut off federal funding to schools that didn’t open their doors in the new school year.

And many agree primary school students can’t learn as well through distance learning.

But parents and educators have protested returning to classrooms due to major safety concerns. While children might not get very sick from coronavirus, they can still be carriers and infect others — and this virus is notoriously easy to transmit.

Some school districts across the country have announced they’ll only hold virtual classes for at least the first several weeks of the upcoming semester.

And the concern isn’t just about the kids and their families. About one in four teachers are at risk of serious illness if they contract Covid-19, according to an analysis by the Kaiser Family Foundation.