70% to 85% of Americans need to be fully vaccinated for a return to normal, Fauci says. So far it’s less than 2% 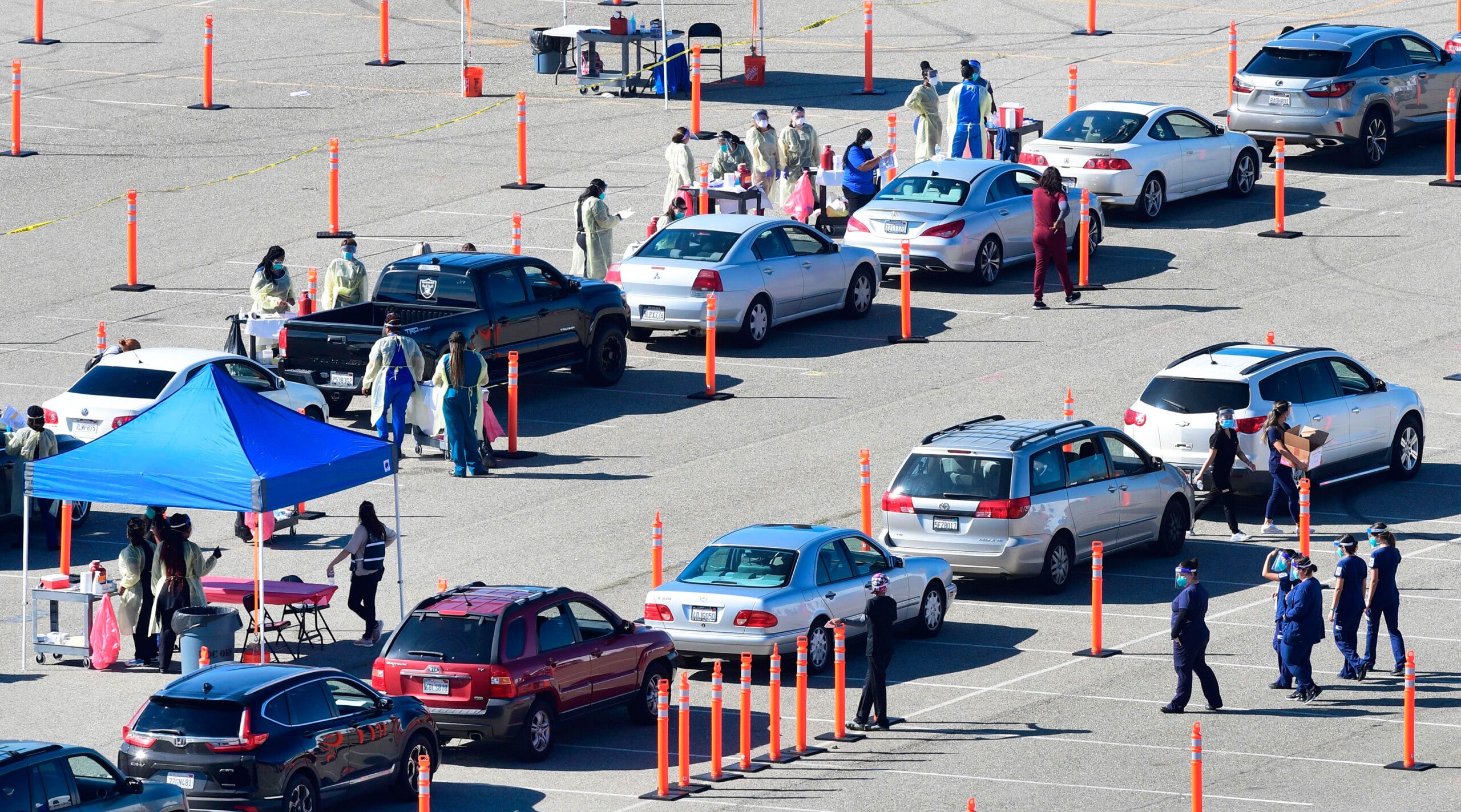 (CNN) — About 70% to 85% of the US population should be fully vaccinated against Covid-19 before the country can begin to return to a sense of normalcy, Dr. Anthony Fauci told CNN Tuesday night.

So far, less than 2% of Americans have received both doses of a Covid-19 vaccine, according to data from the Centers for Disease Control and Prevention.

Fauci said he’s hopeful the country can get to that high level of vaccinations by the end of the summer to the beginning of fall.

“Having said that,” he added, “there is an absolute ‘but’ in that. And the ‘but’ is that we have to address the variants.”

Experts have sounded the alarm about the new Covid-19 variants that have been detected in the US, warning the country is now in a race against time to vaccinate as many people as possible before the variants spread too far and possibly trigger another surge of infections.

Infectious disease expert Dr. Michael Osterholm said earlier this week that a surge fueled by the variant first detected in the UK — the B.1.1.7 strain — is likely to occur “in the next six to 14 weeks.”

And there are also concerns around what the variants will mean for vaccine efficacy. Studies have suggested a variant from South Africa could pose a problem for vaccines, while a new report this week said a mutation that could impact vaccines has also been detected in samples of the B.1.1.7 strain.

The best thing Americans can do now, Fauci said, is to prevent the virus from spreading further and mutating.

“The only way a virus mutates (is) if it can replicate. So if you vaccinate people and double down on public health measures and keep the level of viral dynamics low we will not have an easy evolution into mutations,” he said. “That’s something that people really need to understand.”

“The way you stop those mutations: Get vaccinated and abide by the public health measures,” Fauci said.

Health officials in three states — New Jersey, California, and Alabama — have begun to identify deaths believed to be linked to the variant first identified in the UK. While the B.1.1.7 variant may be more transmissible, it is not known to be more deadly or cause more severe disease.

The University of Alabama Birmingham Hospital told CNN on Wednesday that a male patient died on February 2 from myocarditis and cardiogenic shock after he contracted the B.1.1.7 variant.

On January 27, New Jersey Health Commissioner Judy Persichilli said at a news conference that one person who had died had the coronavirus variant. The patient, who was not identified, had underlying health conditions.

Health officials in San Diego County announced on January 28 a “probable” variant case in a 71-year-old man who had died.

Dr. Eric McDonald, San Diego County’s medical director of epidemiology, told reporters “…this is a household contact of a confirmed case, who unfortunately, we didn’t have that sample available to prove that it was whole genome sequence B.1.1.7.

“But because there is an intimate member of the household who did have that variant, and that individual was pretty much exposed to that 71-year-old, we are confident in assigning that as a probable case,” McDonald added.

The US has been averaging more than 140,000 new coronavirus cases and more than 3,000 reported deaths per day lately, but very few Covid-19 tests are sequenced to find out if the virus is a variant.

The limited amount of sequencing has found more than 500 cases of the B.1.1.7 variant in 33 states, according to the CDC.

Study: Younger adults are biggest spreaders of virus in US

A group of researchers reported Tuesday that the biggest spreaders of Covid-19 in the US are adults aged 20 to 49 — and efforts to control the spread, including vaccinations, should probably focus on that age group.

The team of researchers at Imperial College London used cell phone location data covering more than 10 million people and publicly available information on the spread of the virus to calculate which age groups were most responsible.

They estimated that people 35 to 49 accounted for 41% of the new transmissions through mid-August, and adults 20 to 34 were responsible for another 35%. Children and teens accounted for just 6% of spread while people 50 to 64 made up 15% of transmission.

Experts have previously warned that the surges were largely driven by younger groups, Fauci said, but that doesn’t mean those groups should get the vaccine “at the expense of getting the older people who have the underlying conditions, get vaccinated.”

“You don’t want to deprive them to get the younger ones, because they’re the ones that are going to wind up in the hospital and have a higher rate of death,” Fauci said.

More than 447,000 Americans have already lost their lives to the virus, according to data from Johns Hopkins University — and more than 100,000 have died this year alone.

States will see an increase in vaccine supply

Hoping to slow the pandemic as soon as possible, states have been pushing for more supply and ramping up their capabilities to get more shots into arms faster.

“Our challenge is supply, supply, supply,” Kentucky Gov. Andy Beshear said in a statement Tuesday. “Remember, we will get a vaccine to everybody, it’s just going to take some time.”

FEMA has assigned more than 600 staff to the effort — with more than half of that staff deployed directly to the vaccination sites across the country.

The Biden administration said Wednesday that the federal government will partner with California to launch two new vaccination centers in hard-hit communities.

One center will be in East Oakland and another on the east side of Los Angeles. Both are predominantly Latino communities disproportionately impacted by the pandemic.

The administration announced Tuesday it was boosting the weekly allocation of vaccines to states, tribes and territories by an additional 5%.

In New York, Gov. Andrew Cuomo said the increase will allow for the state to supply about 20% more vaccine doses to local governments in the coming weeks, which means they could choose to expand guidelines on who is eligible for a shot.

“We have statewide priorities set by the federal government but if a local government is now getting more (doses) and they believe in their local circumstance they want to prioritize taxi drivers, Uber drivers because they think that has been a problem, or developmentally disabled facilities or restaurant workers, they have that flexibility,” Cuomo said in a news conference Tuesday.

The state had to shut down and postpone many vaccination appointments following a massive winter storm that pounded the region this week.

New York City officials said Tuesday that people who had their appointments canceled due to weather will be contacted individually for rescheduling, highlighting the city was committed to not making any new appointments until all those people were taken care of.

The Biden administration also said Tuesday it will begin direct shipments of Covid-19 vaccines to retail pharmacies next week — starting at about 6,500 stores.

“Millions of Americans turn to their local pharmacies every day for their medicines, flu shots, and much more. And pharmacies are readily accessible in most communities, with most Americans living within five miles of a pharmacy,” White House Covid-19 response coordinator Jeff Zients said.

CVS said in it will kick off vaccinations next week as part of the federal program. The 11 states where the pharmacy chain will begin vaccinations are California, Connecticut, Hawaii, Maryland, Massachusetts, New Jersey, New York (not including New York City), Rhode Island, South Carolina, Texas and Virginia.

Vaccination appointments can be booked as early as February 9 at CVS locations that offer the vaccine, the statement said, and eligibility requirements in each jurisdiction will still apply.

The extra doses of vaccine for pharmacies will come from increased productions by vaccine makers Moderna and Pfizer, Zients said.

“It’s all a result of the manufacturing scaling up, and we hope that we can do all we can, and we will do all we can, to continue that scale up and make more vaccines available,” Zients said.