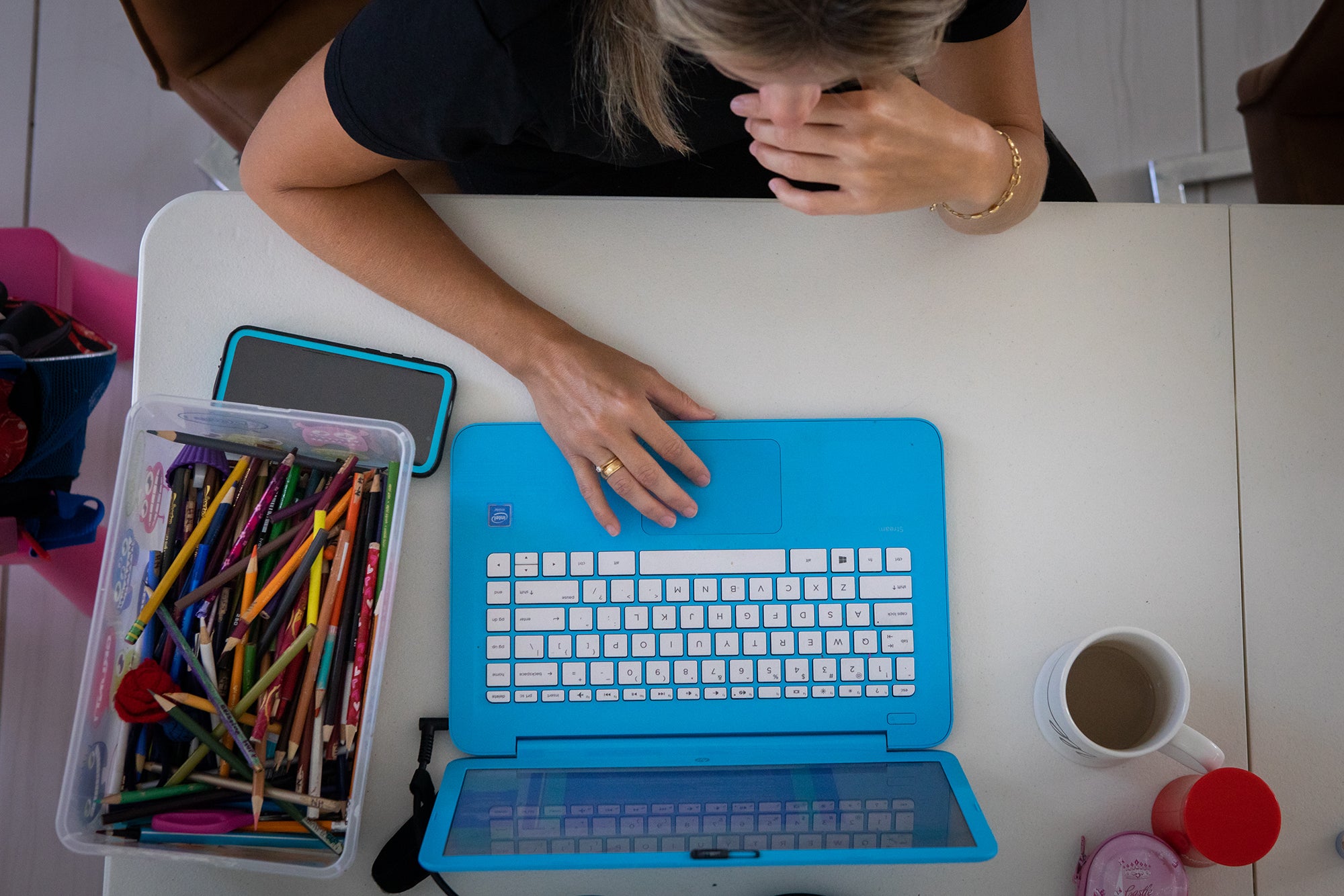 A mother working from home sits alongside her son, not pictured, attending school remotely in an arranged photograph taken in Miami, Florida, U.S., on Tuesday, Sept. 8, 2020. Tens of thousands of students and teachers haven't been able to access K12's My School Online platform this week. Miami-Dade public school revealed Wednesday that the district never signed a $15.3m no-bid contract with K12 Inc., the company at the center of the "unprecedented crisis," according to a Miami Herald report. Photographer: Jayme Gershen/Bloomberg via Getty Images
by: Anneken Tappe, CNN Business
Posted: Oct 8, 2020 / 12:30 PM EST / Updated: Oct 8, 2020 / 12:31 PM EST

(CNN) — Hundreds of thousands of women— nearly eight times more than the number of men — dropped out of the US labor force last month, as the pandemic continues to exacerbate inequalities in America’s economy.

About 617,000 women left the workforce in September alone, compared with only 78,000 men, according to government data released Friday. Half of the women who dropped out were in the prime working age of 35-44.

Women have been hit harder by this recession than by previous downturns. Industries that employ a lot of women, such as hospitality and leisure, are faring worse during the pandemic.

Women also are more likely to take on care responsibilities in the home, which during a time of homeschooling and home caring can be too much for many to continue their professional careers.

And moms are more than three times as likely than dads to shoulder most of the housework and caregiving, according to McKinsey’s and LeanIn’s Women in the Workplace report.

Lana D. in California, for example, who requested only her first name be used out of privacy concerns, said she and her husband decided that one of them had to step back from their careers to support their two young children’s primary school education. In the end, it was Lana who put her career in product management on hold to stay home.

Last month’s massive workforce dropout rate for women is at least partially due to the lack of childcare options, said Russel Price, chief economist at Ameriprise, in emailed comments. Employment in child daycare services was still down nearly 18% in September from its pre-pandemic level, he added.

Making the decision to leave the workforce isn’t easy. In a household with two earners, partners may decide for the one with the lower income to take a step back.

Single parents don’t have that kind of leeway.

“I really wish they could figure something out to help single moms,” said Jessica R. of North Carolina, a single mother of one who also requested only her first name be used out of privacy concerns.

“I have always been a very hard worker,”Jessica added.”I do not like depending on the government and I’m sure the other moms in my position feel the same way. There has to be something that the government can figure out to help us.”

But hopes for further government stimulus were upended on Tuesday when President Donald Trump shut down any negotiations until after the election.

Jessica is collecting unemployment benefits for the first time in her life and moved in with her mother to make ends meet. Her assistant manager position in retail disappeared in the pandemic. Now that her child’s schooling is done remotely, she doesn’t know how she could to return to work, she told CNN Business.

And it’s not just the salary that disappears after quitting a job — benefits also fall away.

“I do worry that now I am not contributing to a 401(k), and that it will be hard to get back into the workforce,” said Teresa Derdiarian from California, a former proposal coordinator for Associated Right of Way Services, who left the workforce to care for her two young children during the pandemic.

Although she has thought about going back to work, the prospect of paying thousands of dollars in childcare costs every month, as well as possibly exposing herself or her family to Covid-19, is an argument against it, she told CNN.

“I am hopeful that the government will pass another round of extra assistance soon. The virus has not gone away, so I don’t see why they stopped helping out families,” Derdiarian said.

Until parents have adequate care options for their children again, many won’t be able to return to work. That will be a continuing weight on the economic recovery.