As some states open Covid-19 vaccines to all, many others are still weeks away. Here’s a timeline. 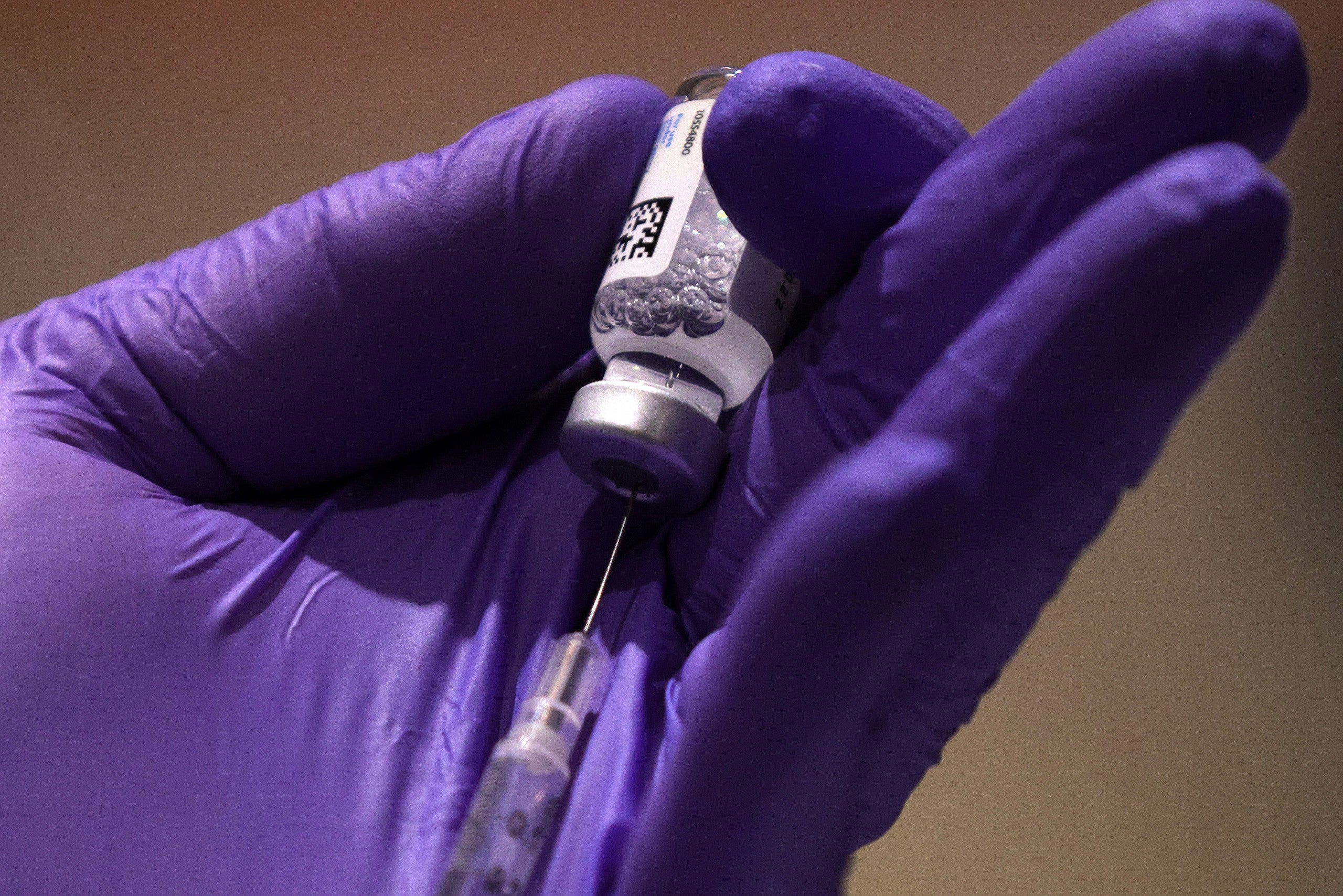 WASHINGTON, DC - MARCH 16: A medical worker draws COVID-19 vaccine from its bottle during a public vaccination event at Washington National Cathedral March 16, 2021 in Washington, DC. The Washington National Cathedral hosted the public vaccination event to help demonstrate trust by faith leaders of all denominations in the COVID-19 vaccines and encourage Americans, especially communities who are at higher risk of severe COVID-19 disease, and those who remain vaccine-hesitant. (Photo by Alex Wong/Getty Images)
by: Jacqueline Howard, Ashley Ahn and Virginia Langmaid, CNN
Posted: Mar 26, 2021 / 08:42 AM EST / Updated: Mar 26, 2021 / 08:42 AM EST

John McGee, 21, told CNN on Tuesday that he was mindlessly scrolling through Twitter last Monday when he saw Mississippi Gov. Tate Reeves’ post: “Starting tomorrow, ALL new appointments will be open to ALL Mississippians. Get your shot friends – and let’s get back to normal!”

Mississippi is one of six states that have expanded coronavirus vaccine eligibility to anyone 16 and older, and a CNN analysis finds that at least 28 more plan to open up to people 16 and older by the end of April.

McGee, who lives in Columbus, Mississippi, decided to waste no time last week.

By 7 the next morning, the college student was on the phone with the Mississippi State Department of Health looking to schedule an appointment. After some trouble scheduling over the phone, he said that he secured an appointment online for 9:20 a.m. at a Lowndes County drive-through site.

It took just 20 minutes for McGee to get vaccinated. By 9:40 am, he was one of the youngest people in Mississippi to have been immunized with one dose of the Pfizer/BioNTech Covid-19 vaccine.

Alaska was the first state in the US to stop prioritizing certain groups for Covid-19 vaccines and open vaccination appointments to everyone 16 and older who lives or works in the state.

McGee said that he was surprised his state was the second, following Alaska, to open vaccinations to anyone 16 and older in the general public.

“There’s a lot of negative stereotypes about the state, and I think some of those are for good reason — the state’s access to health care, the state’s poverty rate, its history of racism are all negative things that exist to this day,” McGee told CNN. “But to have this vaccine eligibility expanded, I think, is one thing that Mississippi can be celebrated for.”

As of Thursday evening, New Hampshire, Minnesota, Florida and North Carolina were the latest states to announce plans to expand coronavirus vaccine eligibility to the general public, with Florida expanding to anyone 16 and older in April and North Carolina expanding to all adults 18 and older in April. New Hampshire announced incremental expansion, with everyone 16 and older eligible as of April 2, and Minnesota said Governor Tim Walz would announce eligibility on Friday for those 16 and older starting March 30.

A CNN analysis of state health departments has found that Covid-19 vaccination eligibility is anticipated to open to the general public in certain states by the following timeline:

Connecticut and other states have employed a phased rollout of Covid-19 vaccines because of “the limited supply of vaccine relative to the demand,” Maura Fitzgerald, a spokesperson for the Connecticut Department of Public Health, told CNN in an email on Monday.

“We started with frontline healthcare workers and residents/staff of long term care facilities, then progressed backwards through age brackets starting with our residents who were 75 years of age and older,” Fitzgerald said, adding that just last Friday the state opened vaccinations to adults 45 and older and announced those 16 and older would become eligible on April 5.

“However, with the increasing vaccine supply from the federal government and the efficiency with which our vaccine providers are getting shots in arms, we were able to expedite our rollout,” Fitzgerald said.

Tom Hudachko, a spokesperson for the Utah Department of Health, told CNN in an email on Tuesday that when demand starts to wane in priority groups — based on information from vaccine providers in terms of available appointments — then eligibility is opened to additional populations.

“Last week, some of our providers were reporting up to 15% of their appointments were available this week, so we made the decision to open eligibility to 16+,” Hudachko said. “We also anticipate increased supply in the weeks ahead, so that factored in as well.”

Six states still have not told CNN when they plan to start vaccinating everyone 16 and older: Alabama, Arkansas, New Jersey, New York, Pennsylvania and Wyoming.

For instance, in Wyoming, Covid-19 vaccination eligibility is expanding on a county-by county-basis, Kim Deti, a spokesperson for the Wyoming Department of Health, told CNN in an email on Thursday.

“Counties in Wyoming have been working their way through the priority groups set at the state level and their progress has varied,” Deti wrote, adding that 15 of Wyoming’s counties have opened vaccine eligibility to the general population so far.

Why there’s ‘variability’ in eligibility across states

There is variability in which states are offering vaccines to everyone 16 and older, and which are still prioritizing groups, because there are state-by-state differences in supply and demand.

“The few states that I’m aware of that have opened fully — it seems like they’re more rural states, and I think they moved through their various priority groups and probably transitioned as they started to see demand going down,” Dr. Marcus Plescia, chief medical officer for the Association of State and Territorial Health Officials, told CNN on Tuesday.

“There is variability in how quickly states have opened up their eligibility and some of that has to do with supply,” Plescia said.

For instance, Plescia said that in some areas in the Southeast, the demand appears to be not quite as robust and so some of those southern states may open vaccinations to everyone 16 and older more quickly than other states in the Northeast or on the West Coast where there is still a lot of demand.

“Some states have sort of wanted to be more thorough in reaching a significant proportion of each group before they open it up to more groups,” Plescia said.

“So I think in some states they might actually spend some time doing a little more outreach to, say, people over 65 before they open up more broadly,” he said. “Whereas I think there are some states where they’ve opened it up and the demands there will stay with that group, but once the demand starts to slow down — rather than going out and really trying to recruit more people — they’re just opening it up.”

President Joe Biden has directed states to open vaccination to all adults by May 1. Plescia told CNN that he thinks that goal is within reach.

“In most states, it seems like we have the capacity to administer the vaccine. It’s really just a supply issue,” Plescia said. “I guess with most of the states, the response to the Biden administration’s goal has basically been, ‘Okay, get us an ample supply where we can meet the needs and we’ll be ready to do it.’ So I do think that’s ultimately going to be the deciding factor in whether we really have — not an unlimited supply — but a significantly increased supply where you can open it up and you know that you’re not going to be running out of vaccine.”

Meanwhile, McGee applauds his state of Mississippi for opening vaccinations to the general public and he told CNN that he is optimistic that President Joe Biden’s hope that all adults will be vaccinated by May 1 becomes a reality.

“I think everything is pointing in the right direction,” he said.

‘Supply has driven this whole conversation’

Overall, state decisions around opening up Covid-19 vaccine eligibility have hinged on supply and likely will continue to do so, Dr. Georges Benjamin, executive director of the American Public Health Association, told CNN on Tuesday.

“The reason for prioritizing in the first place was because we knew supply would be short in the beginning, and then of course there was a desire to deal with health inequities — so those two things, to some degree, drove the priority setting,” he said. “At the end of the day, the goal is to get everybody vaccinated and we should leave no stone unturned.”

Now with Biden’s goal to open vaccinations to everyone 16 and older by May 1, Benjamin said he anticipates more states will expand eligibility in the coming days.

“I think you’re going to continue to see states opening up, trying to get ahead of that date — but it’s going to be totally dependent on vaccine supply,” Benjamin said.