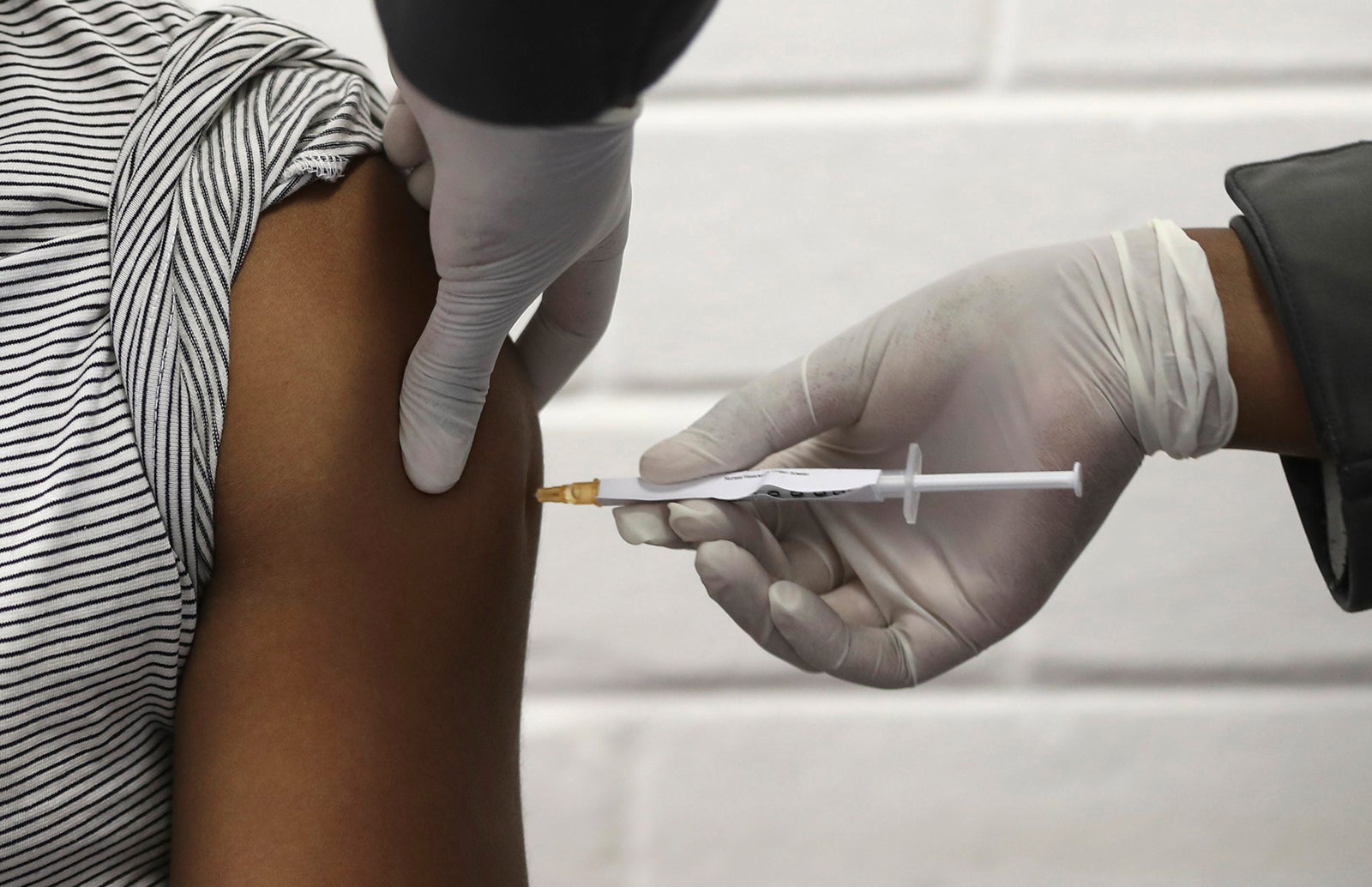 FILE - In this Wednesday, June 24, 2020 file photo, a volunteer receives an injection at the Chris Hani Baragwanath hospital in Soweto, Johannesburg, as part of Africa's first participation in a COVID-19 vaccine trial developed at the University of Oxford in Britain in conjunction with the pharmaceutical company AstraZeneca. On Friday, Oct. 23, 2020, AstraZeneca Inc. announced that the Food and Drug Administration is letting it resume testing of its COVID-19 vaccine candidate in the U.S. (Siphiwe Sibeko/Pool via AP)
by: Stephanie Halasz, Kara Fox and Amy Cassidy, CNN
Posted: Nov 23, 2020 / 04:15 PM EST / Updated: Nov 23, 2020 / 04:16 PM EST

(CNN) — Drugmaker AstraZeneca announced on Monday that its experimental coronavirus vaccine has shown an average efficacy of 70% in large-scale trials — the latest of several vaccine trials worldwide to post their results this month.

The average efficacy of 70% came from the average of two different dosing schedules tested as part of the trials in the United Kingdom and Brazil.

It is not yet clear why the two dosages produced such different results.

When people were given the smaller dose, the number of asymptomatic infections dropped, indicating a difference in transmission, Professor Andrew Pollard, the trial’s lead investigator at Oxford, said in a call with journalists on Monday.

“What we’ve always tried to do with a vaccine is fool the immune system into thinking that there’s a dangerous infection there that it needs to respond to — but doing it in a very safe way,” Pollard explained. “So we get the immune response and we get the immune memory … waiting and ready if the pathogen itself is then encountered.”

It may be that the best way of “kicking the immune system into action” is to give the body a small amount of the vaccine to begin with — and then follow up with a larger amount, but as the data on that method is preliminary, there is still more work to do, Pollard said.

Russia’s sovereign wealth fund, which is financing its vaccine research, said earlier this month that preliminary data from the Sputnik-V coronavirus vaccine suggested 92% efficacy. However, some scientists have urged caution, noting that the data is far from conclusive.

Pollard addressed the efficacy differences between those other trials on Monday, explaining that AstraZeneca had used slightly different protocols to measure the disease that included all aspects of the disease — including mild cases — which are harder to predict.

He said that the results of the trials were “exciting” and demonstrated that they had an “effective vaccine that will save many lives.”

No participants who received the vaccine were hospitalized or reported suffering severe cases of the virus, the company said in a statement on Monday.

Crucially, the AstraZeneca vaccine can be distributed and administered within existing healthcare systems, as it can be stored, transported and handled in normal refrigerated conditions (from 2-8 degrees Celsius, or 36-46 degrees Fahrenheit) for at least six months, the company said.

It will also be cheaper than rival coronavirus vaccines from makers Pfizer and Moderna. AstraZeneca has pledged to “ensure broad and equitable access to the vaccine at no profit for the duration of the pandemic.”

Speaking on CNBC on Monday, Ruud Dobber, president of AstraZeneca US and executive vice president of BioPharmaceuticals said that “ensuring that a COVID-19 vaccine is available to everyone around the world, regardless of wealth, is an important part of AstraZeneca’s strategy.”

The company said it was making “rapid progress” in manufacturing, with a capacity of up to 3 billion doses of the vaccine in 2021 on a rolling basis, pending regulatory approval.

AstraZeneca said it would “immediately prepare regulatory submission of the data to authorities around the world that have a framework in place for conditional or early approval,” adding that it will seek emergency-use listing from the World Health Organization (WHO) to accelerate vaccine availability in low-income countries.

Professor Peter Piot of the London School of Hygiene & Tropical Medicine told the Science Media Centre he was “very pleased” to see the the Oxford-AstraZeneca vaccine’s efficacy rates of 62% to 90%, depending on the doses used.

“The encouraging news is that greater protection at lower dose may mean that more people can be vaccinated with the same amount of vaccines, and that this vaccine can be stored easily at regular fridge temperature,” Piot said, noting that it would also help with equitable access to the vaccine globally.

‘Good news for everyone’

The news was welcomed by British Prime Minister Boris Johnson, who described the announcement as “incredibly exciting news” in a tweet on Monday.

The UK’s Health Secretary Matt Hancock told the BBC it was “very good news for everyone,” and that — subject to regulatory approval — he expected most doses to be distributed to the public in the new year. The UK government has already ordered 100 million doses of the vaccine.

On Friday, AstraZeneca told CNN that the company had already delivered four million vials of its vaccine candidate to the UK government, and that millions more frozen doses were ready to be sent.

Speaking to journalists on Monday, Pollard stressed that if the world is to get back to normal, global vaccination is key. He said that process would have to be a collaborative effort.

“Beating COVID-19 will depend on global collaboration,” Weller told the Science Media Centre, adding that “the incredible scientific progress being made will be for nothing if global governments do not make more money available, and urgently.”

Trials of the AstraZeneca Oxford vaccine were carried out around the world, including in the UK, the US, Japan, Russia, South Africa, Kenya and several Latin American countries.

The tests were temporarily paused in September following a global safety review after a volunteer in Britain developed a neurological condition, but resumed within weeks, after checks by regulators.

At 70%, the AstraZeneca vaccine’s average efficacy is greater than the level of efficacy that the US Food and Drug Administration aimed for, which was at least 50% efficacy.

Billions and billions of people

WHO officials on Monday said that AstraZeneca’s vaccine candidate showing 70% efficacy on average is “good news,” but they are awaiting more clinical data.

“The good news is that vaccines for COVID-19 disease are possible to make, and it’s possible that we will have a number of different vaccine candidates that can be used in the fight against this disease,” WHO chief scientist Dr. Soumya Swaminathan said during a news briefing on Monday.

“We would like to provide access to as many efficacious and safe vaccines as possible so we can cover the population around the world. Remember we have to cover a huge number of people — billions and billions of people. This is unprecedented,” Swaminathan said. “We will need all the manufacturing capacity in the world to be able to do that.”

Dr. Mariângela Batista Galvão Simão, WHO assistant director-general for Access to Medicines and Health Products, said during Monday’s briefing that WHO already has had several discussions with AstraZeneca regarding the company’s vaccine candidate.

“We are about to receive more data,” Simão said. “So we will be analyzing this data very carefully.”