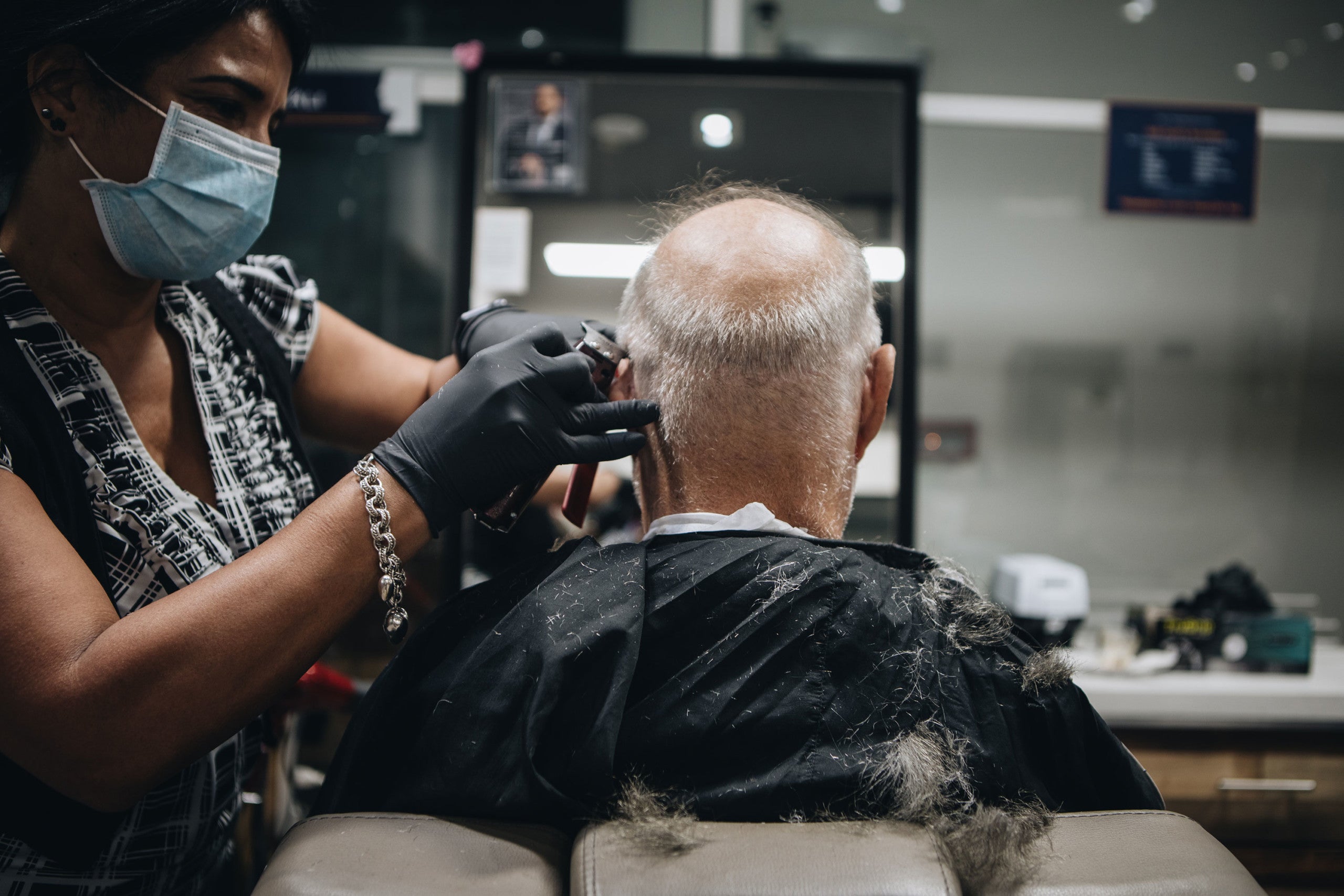 A stylist wearing a protective mask and gloves cuts a customer's hair at a barber shop in Coral Gables, Florida, U.S., on Monday, May 18, 2020. Florida Governor Ron DeSantis announced a partial re-opening order in Miami-Dade county, the two counties hardest hit by the coronavirus outbreak. Photographer: Jayme Gershen/Bloomberg via Getty Images
by: Faith Karimi and Steve Almasy, CNN
Posted: May 21, 2020 / 11:12 AM EST / Updated: May 21, 2020 / 11:12 AM EST

(CNN) — At least four states combined data from two different test results, potentially providing a misleading picture of when and where coronavirus spread as the nation eases restrictions.

More than 1.5 million people in the United States have tested positive for coronavirus and over 93,000 have died, according to Johns Hopkins University.

Viral tests are taken by nose swab or saliva sample, and look for direct evidence someone currently has Covid-19. By contrast, antibody tests use blood samples to look for biological signals that a person has been exposed to the virus in the past.

Combining the two tests’ results into one total could provide an inaccurate picture of where and when the virus spread.

The combination also could also overstate a state’s ability to test and track active infections — a key consideration as states ease coronavirus restrictions.

Experts have consistently emphasized that for states to reopen safely, adequate testing and tracing is needed.

“You only know how many cases you have if you do a lot of testing,” said Elizabeth Cohen, CNN’s senior medical correspondent. “If you put the two tests together, you fool yourself into thinking you’ve done more testing than you have.”

Texas, Virginia and Vermont have said they’ve recognized the data issue and moved to fix it in the past few days. In Georgia, health officials said they’ve been adding antibody tests to their “total tests” number in line with methodology from the Centers for Disease Control and Prevention.

The CDC has not responded to CNN’s request for comment on whether its guidance includes adding antibody tests to total test numbers. On its website, the database provides daily test results without a breakdown of whether they’re viral or antibody.

US testing data ‘kind of screwed up,’ experts say

In a new report Wednesday, infectious disease experts described US coronavirus testing as disorganized and in need of coordination at the national level.

Testing is currently not accurate enough to be used to make most decisions on who should go back to work or to school, the team at the University of Minnesota said.

“It’s a mess out there,” said Mike Osterholm, head of the university’s Center for Infectious Disease Research and Policy, which issued the report. “Testing is very, very important, but we’re not doing the right testing.”

The number of tests that have been completed — numbers widely reported by states and by the White House — show only part of the picture, the report reads.

“The data is really kind of screwed up,” Osterholm said. “It’s because the public health system is overwhelmed.”

Just this month, researchers described antibody tests in the United States as having “terrible accuracy” with high rates of false positives.

And in recent days, Georgia and Florida have faced questions about the transparency of their coronavirus data reporting.

States reopening public places at their own pace

As of Wednesday, all 50 states had partially reopened.

States have movedat different paces as governors balance reopening their economies with keeping residents safe. Some states, including Georgia and Texas, rolled out aggressive reopening plans, while others have taken a more measured approach.

Alaska’s and Iowa’s governors said their states are ready to reopen most businesses Friday.

In Alaska, that means all houses of worship, libraries, museums and sporting activities can resume at 8 a.m., Gov. Mike Dunleavy’s office said. Alaska has the fewest cases of all states and has reported single-digit new cases since mid-April.

Alaskans are still encouraged to take precautions, such as distancing and wearing masks in crowds, and visitation to prisons and senior centers will be limited.

Iowa Gov. Kim Reynolds intends to allow movie theaters, zoos, aquariums, museums and wedding venues to reopen Friday, she said. Swimming pools will be allowed to open for laps and lessons as well. Bars can reopen May 28, and school-sponsored activities, such as sports, can resume June 1, she said.

Indiana also plans to move ahead with opening a large swath of its economy Friday, but with restrictions such as limiting social gatherings to 100 people and dining rooms to 50% capacity, and omitting contact games from the list of sports allowed to resume.

More than half of all California counties are moving forward with plans to reopen their economies further despite data showing the state recorded 102 deaths Tuesday, its second-highest number of daily coronavirus fatalities. The last time California reported the highest deaths in one day was 115 on April 21.

Many cities also remain under stay-at-home orders. In Baltimore, gatherings of more than 10 people are still prohibited and retail stores remain closed.

Experts have warned that lifting restrictions prematurelymay mean thousands more Americans will die in a second spike in cases.

More deaths could have been prevented, report says

If the US had encouraged people to stay home and had put social distancing policies in place just a week earlier, more than half the number of deaths and infections could possibly have been prevented, according to new research from Columbia University.

Had the US locked the country down two weeks earlier, 84% of deaths and 82% of cases could have been averted, said the research team led by epidemiologist Jeffrey Shaman.

“Our findings underscore the importance of early intervention and aggressive response in controlling the Covid-19 pandemic,” they wrote in the report, published online in the pre-print server MedRxiv. The findings have not been reviewed by other experts for accuracy.

The first US case was reported at the end of January. It wasn’t until mid-March that the Trump administration urged Americans to avoid groups and limit travel. That’s also when cities including New York started to close schools. The study used epidemiologic modeling to gauge transmission rates from March 15 to May 3 and determine the impact social distancing could have on the transmission of the disease.

The first days were important, they noted. “During the initial growth of a pandemic, infections increase exponentially. As a consequence, early intervention and fast response are critical,” they wrote.

However, they said, it’s also true that they could not account for how people would have responded.

“Public compliance with social distancing rules may also lag due to sub-optimal awareness of infection risk,” they noted.