California to open vaccinations to everyone 16 and older 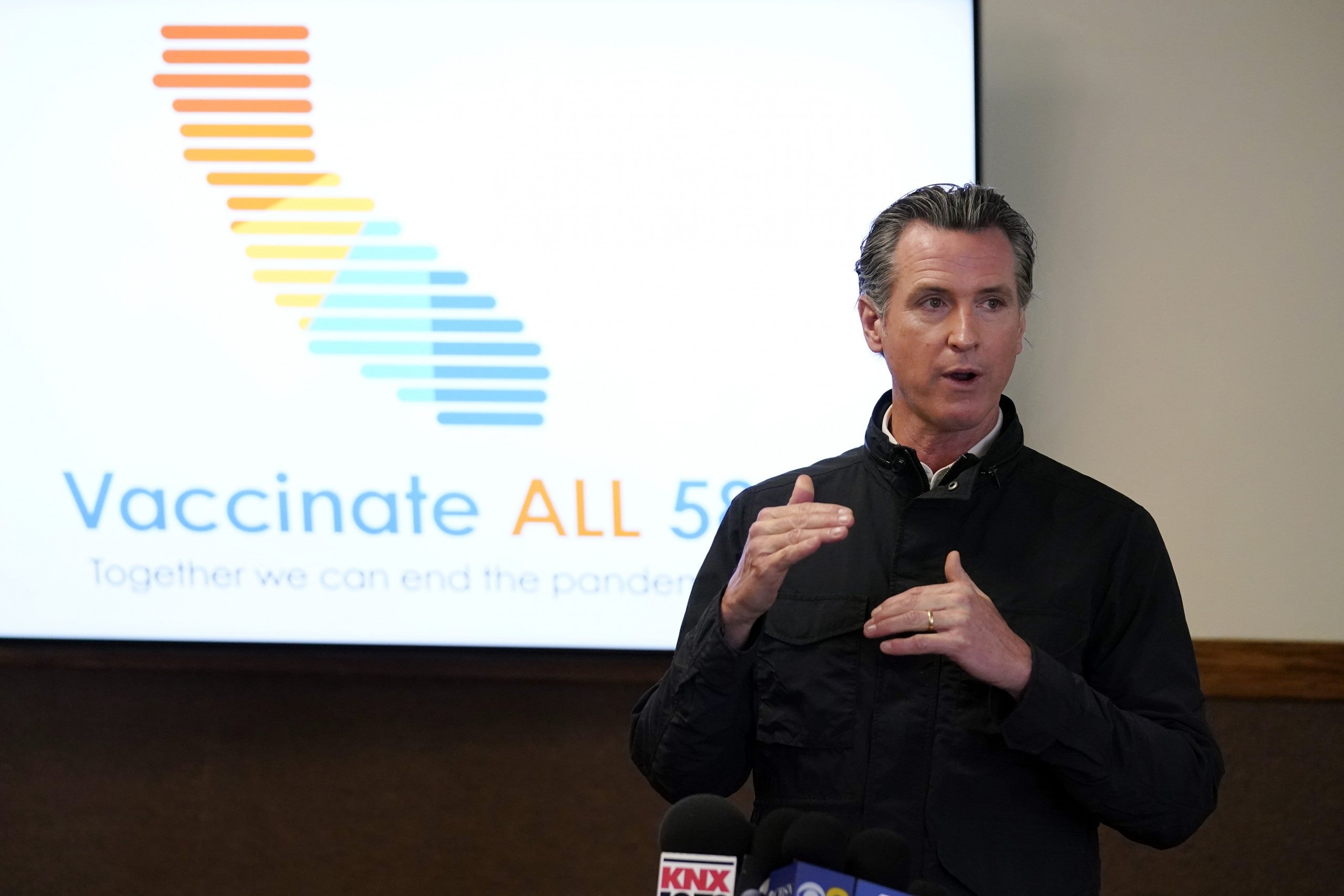 FILE - In this March 10, 2021, file photo, California Gov. Gavin Newsom addresses the media during a visit to a vaccination center in South Gate, Calif. California is expanding its vaccine eligibility to anyone 50 and over starting in April and anyone 16 and over on April 15. Gov. Newsom said Thursday, March 25, 2021, that California expects to receive 2.5 million doses a week in the first half of April and more than 3 million a week in the second half of the month. (AP Photo/Marcio Jose Sanchez, File)
by: By AMY TAXIN and MICHAEL R. BLOOD Associated Press
Posted: Mar 25, 2021 / 05:38 PM EST / Updated: Mar 25, 2021 / 05:38 PM EST

SANTA ANA, Calif. (AP) — California is expanding its coronavirus vaccine eligibility to anyone 50 and over starting in April and anyone 16 and over on April 15.

“In just a few weeks, there’ll be no rules, no limitations, as it relates to the ability to get a vaccine administered,” Newsom said at a news conference in Orange County. “This state is going to come roaring back.”

The move comes as some California counties have veered away from the state’s vaccine eligibility criteria by opening up the shots for people with a broader range of medical conditions than those required in most places, and in some cases, at younger ages.

It also addresses a patchwork eligibility system throughout California in which some areas have already opened up well beyond the state criteria. In some counties, people 50 and up could already sign up for the shots, while San Diego County has expanded the range of qualifying health conditions to include moderate to severe asthma, being overweight and having Type 1 diabetes.

California has administered more than 15 million coronavirus vaccines. Initially, more affluent residents who could afford to spend hours scouring complicated web portals were snagging more appointment slots, which prompted public health officials to take measures aimed at getting more of the doses to underserved communities where the virus has hit the hardest.

The state of 40 million people has seen coronavirus infections plummet in recent weeks following a winter surge. That has paved the way for more businesses to reopen and more schools to bring back in-person instruction.

State public health officials have said more activity can resume as vaccinations continue to rise in the poorest communities. But they have not said how many shots will need to be administered to push beyond its color-coded system guiding business reopenings.

Jose Arballo, a spokesman for Riverside County’s health agency, said the county is ready to ramp up vaccinations. Supplies have increased in recent weeks, there are more appointments available, and the county opened up 30,000 appointments this week, he said — far above previous weeks when slots hovered in the low 20,000s.

“Any time we can vaccinate more people, that’s a good thing,” Arballo said. “We believe we’ll have the supply needed to handle any increase in eligibility.”

The California Teachers Association, which fought to get educators moved up in line for the vaccine earlier this year, also welcomed the news. The state’s K-12 public schools are slowly starting to reopen after a full-year of distance learning that parents and educators say have caused a range of academic and mental setbacks for students.

“Supplies seem to be coming and we’re thrilled,” CTA spokeswoman Claudia Briggs said during a news conference that coincided with Newsom’s.

Eyal Oren, associate professor of epidemiology at San Diego State University, said there have been a lot of changes in the vaccination system as supplies have increased. He said he believes it’s important to prioritize people at greater risk from the virus to ensure they can get their shots quickly, but more vaccinations are welcome.

“We’re in this race of trying to get more people immunity,” he said.