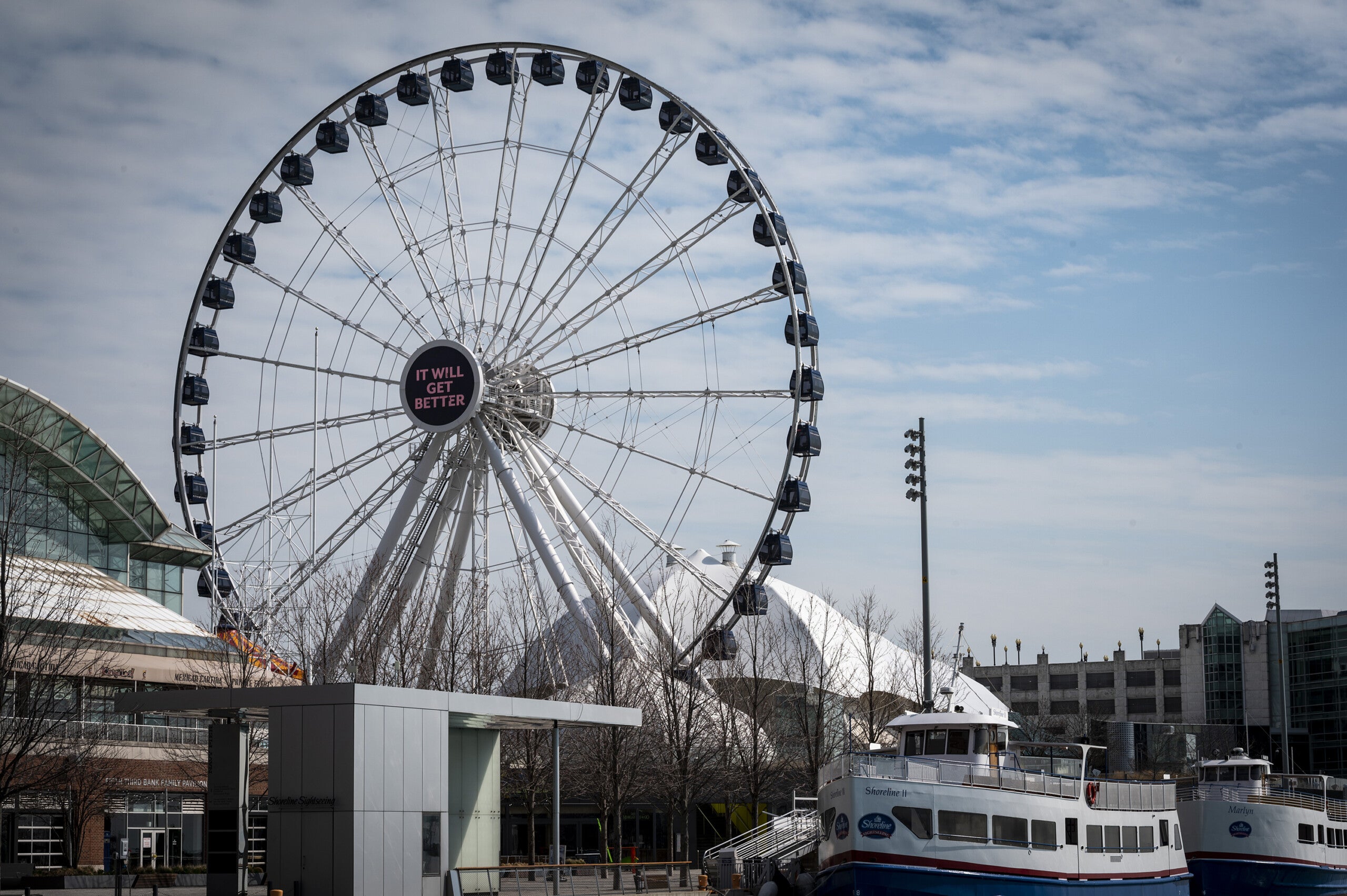 A sign reading "It Will Get Better" is displayed on the Centennial Wheel at Navy Pier in Chicago, Illinois, U.S., on Friday, April 3, 2020. The world's workers are reeling from the initial shock of the coronavirus recession, with job losses and welfare claims around the globe already running into the millions this week. Photographer: Christopher Dilts/Bloomberg via Getty Images
by: Leah Asmelash, CNN
Posted: Aug 19, 2020 / 05:28 AM EST / Updated: Aug 19, 2020 / 05:28 AM EST

Pier officials made the announcement on Tuesday, saying that the closure is “an effort to limit the financial burden and impact of the ongoing Coronavirus (COVID-19) pandemic on the organization.”

“While this was a very difficult decision for the organization, it was a necessary one to proactively ensure the long-term success of one of Chicago’s most treasured and important civic institutions and the communities it serves,” said Navy Pier President and CEO Marilynn Gardner in a statement.

“This decision will also help preserve the future of the many on-site businesses, which continue to face hardships of their own as a result of the pandemic. The temporary closure will allow the Pier and its partners to reduce its operational expenses and support efforts to limit COVID-19 cases as we move into the fall and winter seasons.”

The closure means that all operations — including the more than 70 local businesses that operate on the pier — will be closed, and that public access to the outdoor spaces, including the north and south docks, could be limited or prohibited as well.

This is the second time the pier has closed to the public — first closing from March 16 to June 10 per governmental orders. It’s been doing a phased reopen, but because the pier is seeing less than 20% of its typical attendance in the summer, generating revenue to support operations has been “difficult,” the statement said.

The pier’s primary sources of revenue, the statement said, are attractions like the Centennial Wheel — which hasn’t been able to open. Neither have the Chicago Children’s Museum and Chicago Shakespeare Theater, the Pier said. And because of capacity restrictions, the Pier can’t host private events and other shows, either.

Together, the loss of those earnings have resulted in a projected deficit of $20 million this year alone, according to the Pier, which called the loss “devastating.”

“Navy Pier’s short-term closure will help limit further losses for the organization, as well as the businesses that are housed at the Pier,” the statement read.

Thus far, Pier officials are unsure when the pier will reopen, but said they anticipate a Spring 2021 date.

Big business is feeling the impacts, too. As many as 25,000 retail stores in the US are expected to permanently close this year, as consumer demand for discretionary items stalls and more people shift to online shopping, according to a retail research firm.