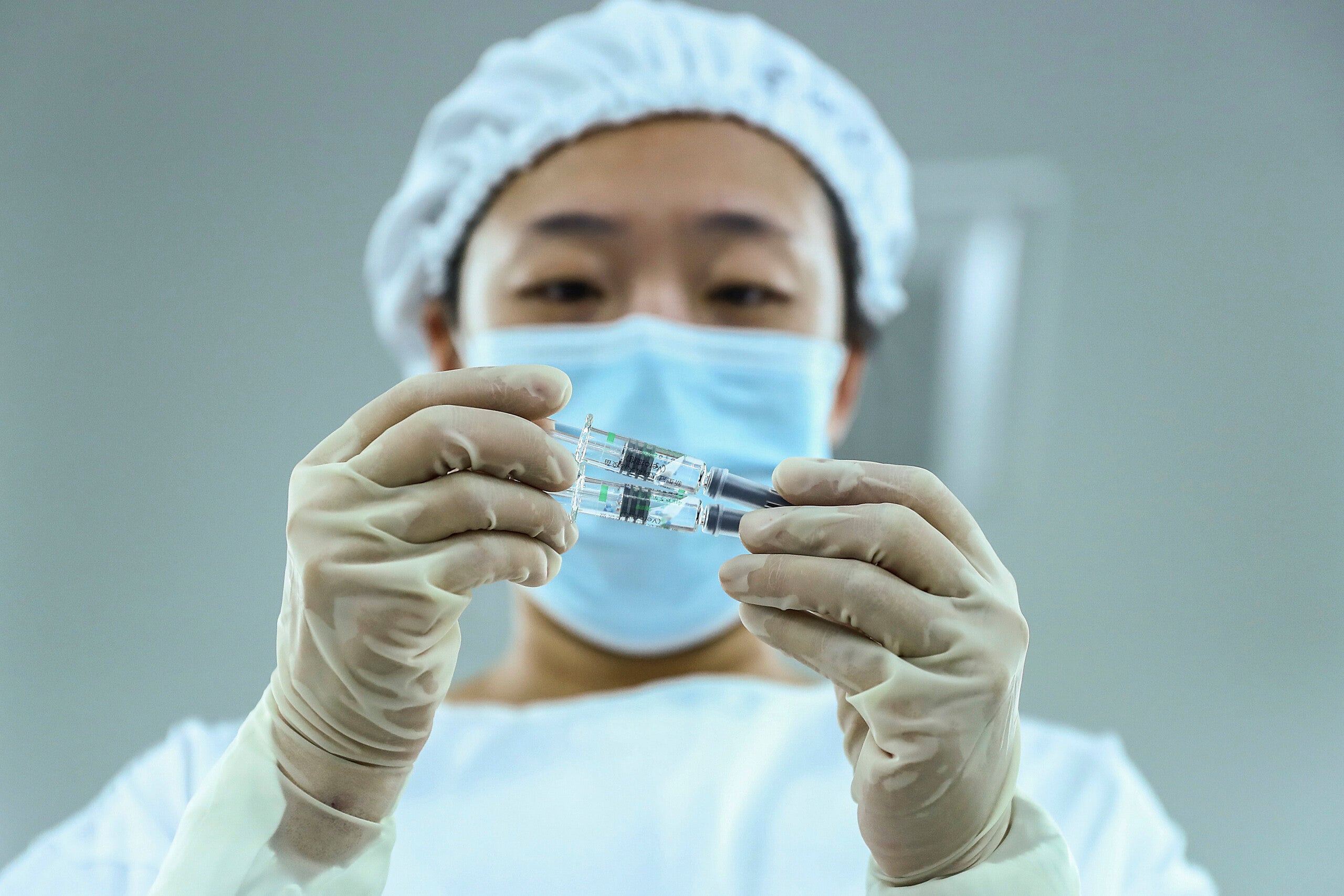 FILE - In this Dec. 25, 2020 file photo, released by Xinhua News Agency, a staff member inspects syringes of COVID-19 inactivated vaccine products at a packaging plant of the Beijing Biological Products Institute Co., Ltd, a unit of state-owned Sinopharm in Beijing. China has given conditional approval to a coronavirus vaccine developed by state-owned Sinopharm. The vaccine is the first one approved for general use in China.(Zhang Yuwei/Xinhua via AP, File)
by: HUIZHONG WU and KEN MORITSUGU Associated Press
Posted: Dec 31, 2020 / 08:10 AM EST / Updated: Dec 31, 2020 / 08:10 AM EST

BEIJING (AP) — China has approved its first homegrown COVID-19 vaccine for general use, health regulators said Thursday, marking the addition of another vaccine in the global fight against a virus that is surging back in many places as winter sets in.

The two-dose vaccine from state-owned Sinopharm is the first approved for general use in China. The go-ahead comes shortly after the country launched a program to vaccinate 50 million people before the Lunar New Year holiday in February. It also comes one day after British regulators authorized AstraZeneca’s inexpensive and easy-to-handle vaccine.

The back-to-back approvals could bring poorer countries, many of which have been unable to secure the Pfizer and Moderna doses being snapped up by rich countries, one step closer to getting vaccines sooner. Pakistan’s science minister said Thursday that his government will buy 1.2 million doses of a Sinopharm vaccine, two days after its death toll topped 10,000.

Technically, China granted conditional approval for the vaccine, which means that research is still ongoing, and the company will be required to submit follow-up data as well as reports of any adverse effects after the vaccine is sold on the market, Chen Shifei, the deputy commissioner of the National Medical Products Administration, told a news conference.

The vaccine was developed by the Beijing Institute of Biological Products, a subsidiary of state-owned conglomerate Sinopharm. The company announced Wednesday that preliminary data from last-stage trials had shown it to be 79.3% effective.

It is an inactivated vaccine, which means the virus was grown in a lab and then killed. The germ is then injected into the body to generate an immune response.

Final proof of its effectiveness will depend on publication of more data. Experts have said important data was missing from Wednesday’s announcement, such as the size of the control group, how many people were vaccinated and at what point the 79.3% efficacy rate was reached after injection.

Sinopharm is one of at least five Chinese developers that are in a global race to create vaccines for the disease that has killed more than 1.8 million people.

In addition to the emergency vaccinations already underway, China plans to start vaccinating high-risk population, such as seniors as well as people with existing chronic illnesses. Officials did not say what percentage of the population they will vaccinate in China.

“This is different in every country but the general thinking is that it has to reach 60% to protect the entire population,” said Zeng Yixin, vice minister of the National Health Commission.

Under emergency use, 4.5 million doses have already been given, including 3 million in the past two weeks, Zeng said.

Practically, the conditional approval means that the drug or product in question may be restricted for certain age groups, according to Tao Lina, a former Shanghai Center for Disease Control immunologist.

Officials declined to name a particular price and gave conflicting statements about it. “It will certainly be in the limit of what people can afford,” said Zheng Zhongwei, another National Health Commission official.

A minute later, Zeng, the NHC official, stepped in to say that the vaccines “will definitely be free for the public.”

The vaccine is already under mass production, though officials did not answer questions about current production capacity.

China’s vaccine, like Russia’s Sputnik shot, could be easier for countries around the world to handle than the Pfizer or Moderna shots, which have stricter cold chain requirements. Sinopharm’s vaccine is able to be stored at 2 to 8 degrees Celsius (36 to 46 degrees Fahrenheit), or a normal refrigeration temperature.

Belarus and Argentina both launched mass vaccinations Wednesday using Russia’s vaccine. Sinopharm’s vaccine has already been approved in the United Arab Emirates and Bahrain, and is slated for use next in Morroco.

Other countries have also been buying doses of another Chinese vaccine candidate, made by Sinovac Biotech. Turkey received the shipments this week of 3 million doses. Indonesia and Brazil have all purchased Sinovac’s vaccines.

China is eager to distribute its vaccines globally, driven by a desire to repair the damage to its image by the pandemic that started a year ago in the central city of Wuhan.

President Xi Jinping has vowed to donate the vaccine as a public good to the world and China has joined COVAX, a global plan for equal distribution and access.

“We eagerly await Chinese vaccines to be included in COVAX’s vaccine bank soon and get WHO prequalification soon as well,” said Shen Bo, a Foreign Ministry official.

The vaccine standards were developed in “close cooperation” with the WHO, officials said.

Meeting the WHO qualification could go some way toward assuring the rest of the world about the quality and efficacy of Chinese vaccines, which already face a reputation problem back home. It would also open the path for Chinese vaccines to be distributed in COVAX and potentially in countries that don’t have their own regulatory agencies.

“This is very exciting that there is another vaccine and one that can be distributed in locations that don’t have the cold chain,” said Ashley St. John, an immunologist at the Duke-NUS Medical School in Singapore. “But at the same time we have to temper the excitement. We have to understand the long term efficacy, effect on transmission and effect on severe disease.”