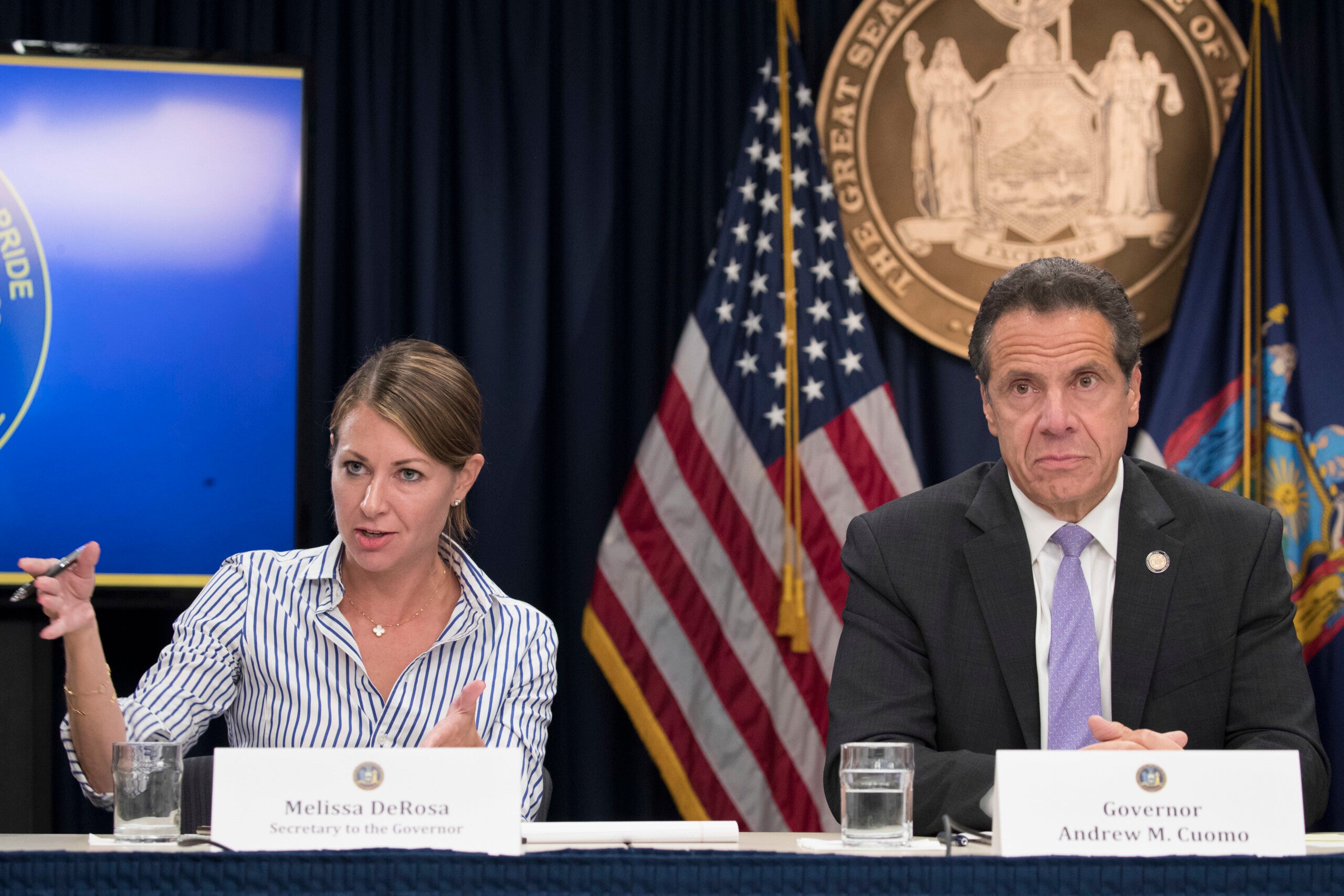 FILE — In this Sept. 14, 2018 file photo, Secretary to the Governor Melissa DeRosa, is joined by New York Gov. Andrew Cuomo as she speaks to reporters during a news conference, in New York. De Rosa, Cuomo's top aide, told top Democrats frustrated with the administration's long-delayed release of data about nursing home deaths that the administration "froze" over worries about what information was "going to be used against us," according to a Democratic lawmaker who attended the Wednesday, Feb. 10, 2021 meeting and a partial transcript provided by the governor's office. (AP Photo/Mary Altaffer, File)
by: By MARINA VILLENEUVE Associated Press
Posted: Feb 12, 2021 / 12:51 PM EST / Updated: Feb 12, 2021 / 12:51 PM EST

ALBANY, N.Y. (AP) — New York Gov. Andrew Cuomo’s top aide told Democratic lawmakers that his administration took months to release data on the coronavirus death toll among nursing home residents because officials “froze” over worries the information was “going to be used against us.”

The information came from a Democratic lawmaker who attended the Wednesday meeting and to a partial transcript released by the governor’s office.

Republicans who term the comment admission of a “cover-up” are now calling for resignations of both Cuomo and the aide, secretary to the governor Melissa DeRosa, while progressive Democrats are blasting the administration over what they say is a lack of transparency.

The disclosure of DeRosa’s comments, made on a conference call with Democratic legislative leaders, came as the Democratic governor and his administration were already facing backlash over their handling and reporting of outbreaks in nursing homes.

In recent weeks, the state has been forced to acknowledge the nursing home resident death toll is nearly 15,000, when it previously reported 8,500 — a number that excluded residents who died after being taken to hospitals.

“Basically, we froze because then we were in a position where we weren’t sure if what we were going to give to the Department of Justice or what we give to you guys and what we start saying was going to be used against us, and we weren’t sure if there was going to be an investigation,” DeRosa told the Democratic leaders Wednesday. Her comments were first reported by The New York Post.

“That played a very large role into this,” she added, saying the administration had asked legislative leaders whether it could “pause on getting back to everybody until we get through this period and we know what’s what with the DOJ.”

DeRosa issued a statement Friday saying the administration had to set aside lawmakers’ request for data to deal with the Justice Department request first.

“We were comprehensive and transparent in our responses to the DOJ, and then had to immediately focus our resources on the second wave and vaccine rollout,” the news release said. “As I said on a call with legislators, we could not fulfill their request as quickly as anyone would have liked. But we are committed to being better partners going forward as we share the same goal of keeping New Yorkers as healthy as possible during the pandemic.”

The news media and the public have been asking the Cuomo administration for data about COVID-19 outbreaks at nursing homes since the spring.

And lawmakers, including Assembly Member Richard Gottfried, have requested data about nursing home deaths since at least June.

Gottfried, the lawmaker who attended the Wednesday meeting and spoke to the AP, called the entire meeting with DeRosa “very disturbing.”

“They weren’t releasing data from the investigation,” he said. “It’s not the sort of thing they would make up. I don’t think the state’s explanation is acceptable. The request for the data from me and others were linked back weeks before the August hearing. And certainly long before any expressions by the DOJ that I’m aware of.”

When asked whether lawmakers would subpoena the Cuomo administration, he said, “I don’t think the New York Legislature is well organized for conducting investigations.”

The state Department of Health initially released data about all deaths of nursing home residents, regardless of location. But the administration stopped that as of May 3, and New York became one of the only states to release only the number of confirmed deaths that took place at nursing homes.