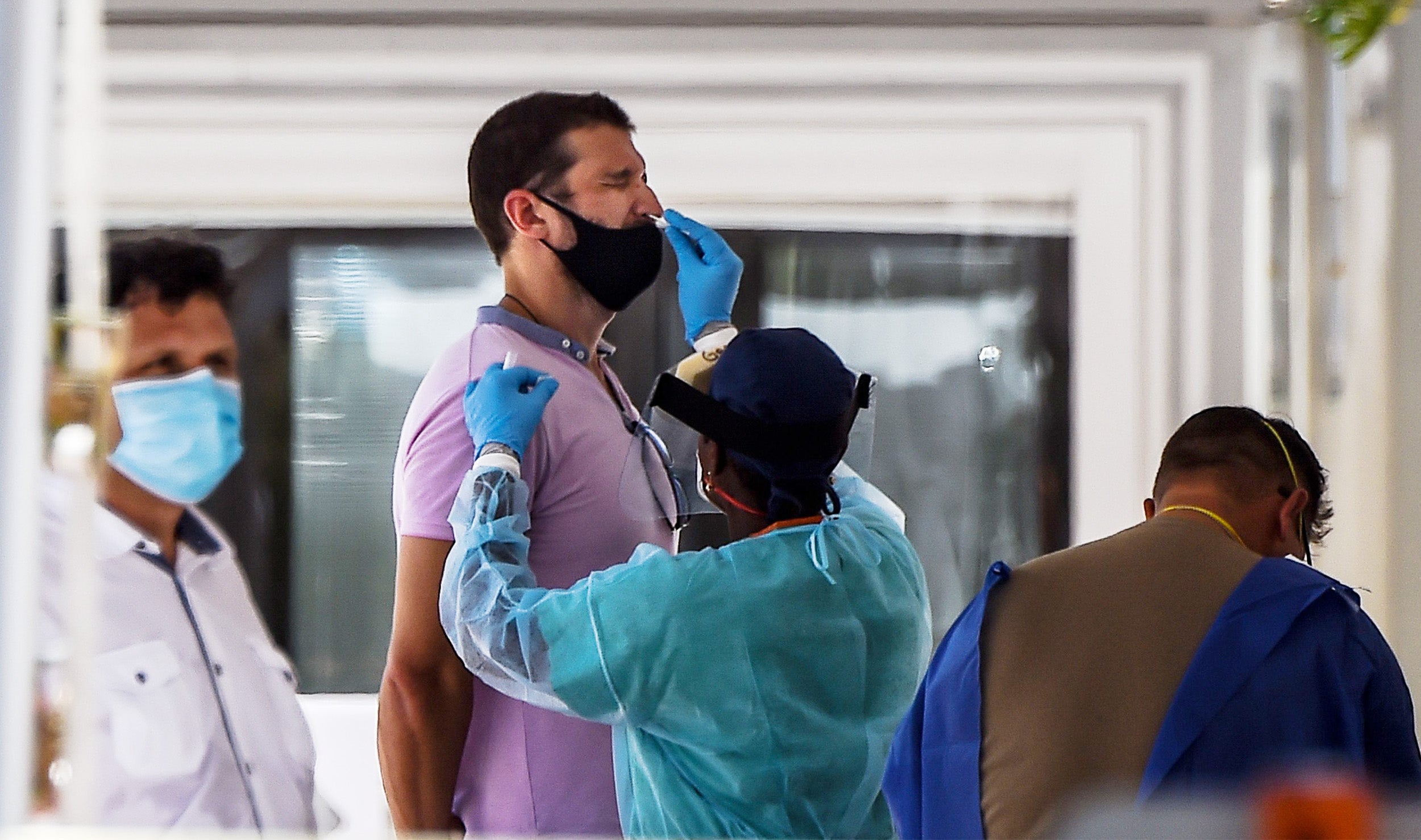 A medical personnel member takes samples on a man at a "walk-in" and "drive-through" coronavirus testing site in Miami Beach, Florida on June 24, 2020. - With coronavirus cases surging across the US South and West, officials are once again imposing tough measures, from stay-at-home advice in worst-hit states to quarantines to protect recovering areas like New York. Nearly four months after the United States reported its first death from COVID-19, the nation faces a deepening health crisis as a wave of infections hits young Americans and experts issue new acute warnings. Photo by Chandan Khanna/AFP/Getty Images
by: Elizabeth Cohen and Dakin Andone, CNN
Posted: Jun 25, 2020 / 03:20 PM EST / Updated: Jun 25, 2020 / 03:20 PM EST

(CNN) — Months ago, as the coronavirus was first spreading across the country, public health officials warned of the heightened risk it posed to older populations and those with underlying health conditions.

But officials are now warning of the growing impact Covid-19 is having on young people, like 29-year-old Jerry Ward, who told CNN he had to be hospitalized after going to a house party for a cousin’s birthday.

According to him, ten people in their late 20s and early 30s from that party in South Florida have since been diagnosed with Covid-19.

“They should take it serious,” Ward said of young people. “Only go to places that are needed, such as doctor’s appointments, work, stuff of that nature.”

According to Florida Gov. Ron DeSantis, the median age of positive Covid-19 cases in March was 65 years old. But within the last week, it has dropped to 35 years old.

As of Thursday, Florida had more than 114,000 cases of Covid-19, with more than 3,300 deaths, according to data from Johns Hopkins University. Approximately 20% of cases are patients between the ages of 25 and 34, per data released by the state Department of Health on Thursday.

“What we’ve seen, particularly over the last week, is a real explosion in new cases amongst our younger demographics,” DeSantis said in a news conference in Orlando earlier this week.

“Half of these positive tests are in that 34 and under age group, and the bulk of the tests that we are seeing are really the 25- to 34-year-olds,” the governor said. “They represent the largest share of all positive tests by a pretty decent margin for anyone throughout the course of the pandemic.”

The situation in Florida grew grimmer Thursday, after reports of two deaths of Covid-19 patients under the age of 18. In the past, DeSantis, a Republican, had pointed to the lack of deaths among minors to support his effort to reopen Florida schools this fall.

Some young people who become infected will need to be hospitalized if they have underlying medical conditions, like Ward. But while many will recover at home, that doesn’t mean the impacts are any less severe.

Taisia Graham, 23, who is recovering from Covid-19, warned her peers to take the disease seriously in a video posted on YouTube, saying, “This is like the worst feeling I’ve ever felt in my entire life.”

Asked about seeing other young people in Florida who aren’t taking social distancing seriously or wearing masks, Graham, a mother of a 2-year-old girl, conceded that she acted the same way when Florida first started to reopen.

“Now that I have Covid, I think it’s really important that people really take this serious,” she told CNN.

On top of the struggle of dealing with the disease on an individual level, health officials also warn that young patients can still spread the coronavirus and are worried about the potential impacts to more vulnerable patients, like the elderly.

“We’re now seeing what is really happening, which is those 18- to 44-year-olds are being affected at a really high rate,” Bromage said. “Their social networks, their employment, is allowing them to mix at a higher rate, and we’re seeing the infection rate — especially in Texas, Florida and Arizona — just skyrocketing in that demographic.”

“It’s just that smoldering fire — but as more of them get infected, the chance of them interacting with the vulnerable population increases and hits that vulnerable population, and then the inferno just begins,” Bromage told CNN’s John Berman. “That’s when we end up with lots of sickness and lots of disease.”