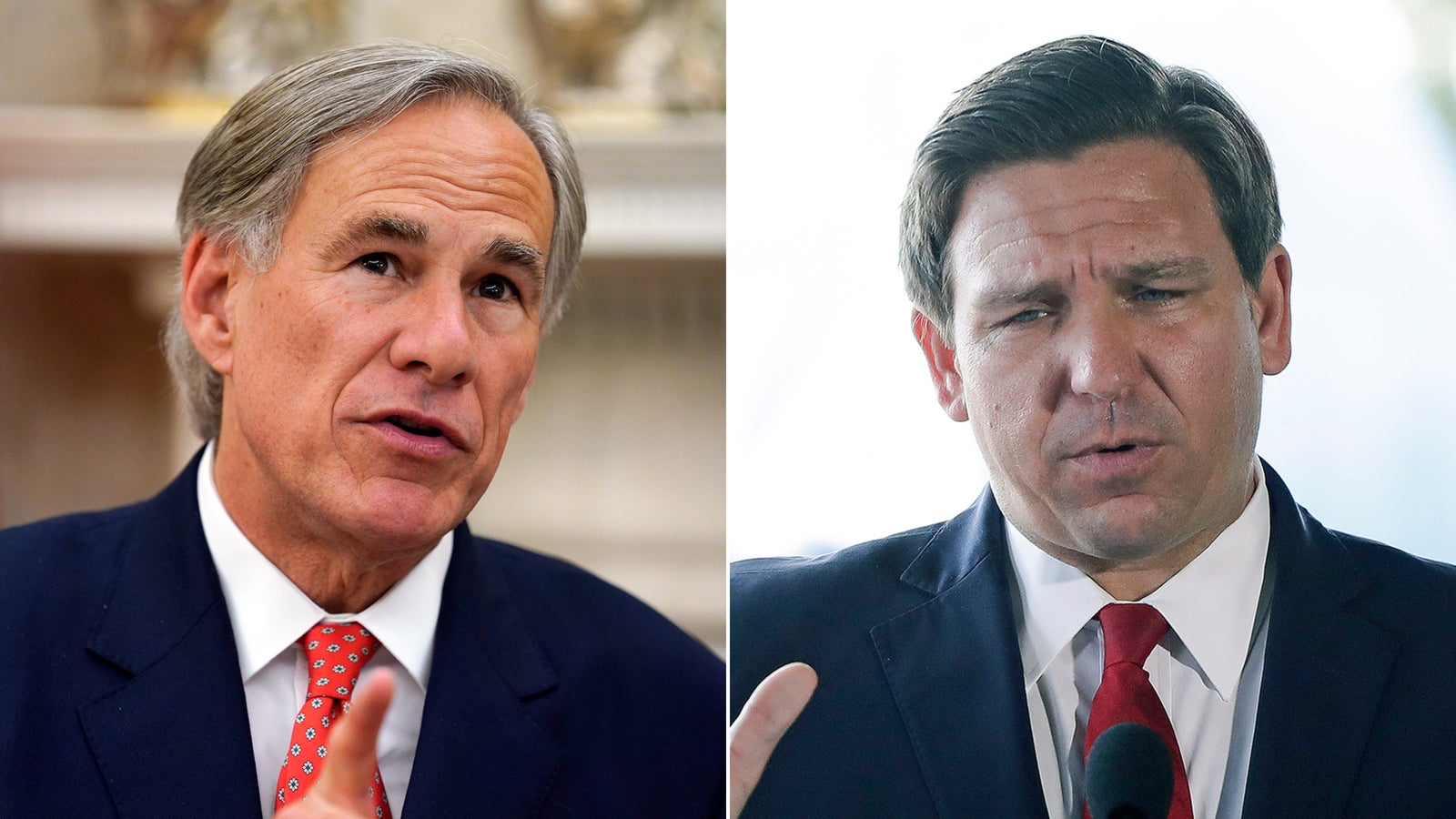 (CNN) — As coronavirus cases spike in Florida and Texas this week, the state’s Republican governors attributed the alarming trends to increased testing, outbreaks in high-risk areas like jails and assisted living facilities, or in Florida’s case, migrant worker communities. They’ve also brushed away pleas from local officials for stronger requirements to wear masks.

The explanations echo the Trump administration’s current positioning on the state of Covid-19 in America: denial and excuses.

At a time when Floridians continue to pack bars and restaurants, Florida Gov. Ron DeSantis brushed away questions about his culpability in aggressively reopening his state during a press conference this week. In remarks layered with racial overtones, he blamed the surge in cases, in part, on crowded living conditions in migrant families. He said the state would also take a closer look at the spread of the virus among construction workers and day laborers, who he said are “overwhelmingly Hispanic.”

Pointing to one outbreak at a watermelon farm in Alachua County and another in a migrant community known as Indiantown in Martin County, DeSantis argued that “the close contact” in those households as well as the work environments of farm laborers are “really providing areas for the virus to thrive.”

“Some of these guys — they go to work in a school bus, and they are all just like packed there like sardines, going across like Palm Beach County or some of these other places, and (there’s) all these opportunities to have transmission,” DeSantis said Tuesday, adding that some of the workers are “migratory” and that the state’s health department is alerting Georgia and Alabama about “what may be coming down the pike.”

In Texas, Gov. Greg Abbott continues to insist there is no reason for alarm because the state’s hospital bed capacity is dramatically better than it was earlier this year when the pandemic first hit.

Abbott, who wore a mask to his press conference and took it off while speaking, has rebuffed a request from nine city mayors that would allow them to require masks in their cities. He says local officials should be using other tools at their disposal — like fining rule-breakers for big gatherings. The Texas governor also said the rise in cases this week was due to a batch of positive tests that all came in on June 10 from Texas prisons and a data error in rural Pecos County.

“As we continue the process of opening up Texas — as we continue to have Texans return to their jobs, so that they are able to earn a paycheck that will help them pay their bills and put food on their tables,” Abbott said, “…we remain laser focused on maintaining abundant hospital capacity.”

Both DeSantis and Abbott have argued they always expected case numbers to rise when testing increased, statements that directly contradict the assertions by epidemiologists that case numbers should go down with greater testing, because theoretically health officials should be able to trace the cases and slow the spread of the virus.

President Donald Trump has set the tone for these Republican governors from the top, intently focusing on ensuring that the economy recovers as the November election looms.

Trump described the virus as “fading away” during an interview this week as he prepares to host a campaign rally in Tulsa, Oklahoma, on Saturday that could pack thousands of people into arena with no requirement for participants to wear masks.

Vice President Mike Pence urged governors during a call this week to highlight ramped up testing in their states as a reason coronavirus cases are rising. Pence, who heads the administration’s coronavirus task force, declared on Thursday in Michigan that the nation has proven “that we can safely reopen America.”

“Every single day we are one day closer to putting the coronavirus in the past,” Pence said during remarks at a Michigan steel plant Thursday. “We slowed the spread. We flattened the curve. We cared for the most vulnerable, and we saved lives.”

Those claims by Trump and Pence, however, are not supported by the facts. Twenty-three states saw an increase in new cases between June 10 and 17, according to a CNN analysis of data from John Hopkins University.

Florida and Texas are two of the 10 states experiencing record-high seven-day averages of new coronavirus cases, according to the analysis.

Florida officials are pointing to an “aggressive testing” strategy in their state, where DeSantis noted that health officials have made testing available to every resident of a long-term care facility as well as to the employees who work there.

Florida, which allowed certain businesses to reopen on May 4, announced its highest single-day count Thursday since the pandemic began, according to data released by the Florida Department of Health. The percentage of people testing positive hit a new peak of 10.18% on Tuesday, before falling to 9% on Wednesday, according to the new data from the state health department.

“Certainly as we reopened, we did expect to see an increase — but not like this,” St. Petersburg Mayor Rick Kriseman said during an interview on CNN’s “At this Hour” Thursday. (The number of cases reported each day in Pinellas County, where St. Petersburg is located, has risen dramatically since early June).

“There are all kinds of alarm bells that are going off for me,” said Kriseman, a Democrat. “I’m not comfortable with what I see happening in my community,” he said, explaining his decision to require business employees to wear masks if they come face-to-face with customers beginning on Friday. “I think you’re going to see mayors across the state of Florida that are going to take actions in response to these numbers because we’re just not seeing that from our leadership in Tallahassee.”

But DeSantis this week rejected the notion that reopening Florida businesses led to the record numbers of cases, and said he did not think a requirement to wear masks is necessary. Restaurants, he noted, have been open for close to six weeks in some areas: “The idea that that all of a sudden is the reason (for the increase), I’m not sure that’s the case.”

The Florida governor noted that from the beginning of the outbreak, he has recommended people wear masks if they are face-to-face with another person, or can’t socially distance. But, he said: “You don’t need to be wearing it if you are going for a jog or you’re on the beach. And so, some of this stuff can get out of hand. I want to be reasonable about it.”

DeSantis noted that the state has “6,400 ventilators that are just sitting idle.”

Abbott has focused on Texas’s ability to handle new cases as hospitalizations reached a new record this week with 2,947 coronavirus patients — nearly doubling since Memorial Day (when 1,534 hospitalizations were reported), according to the Texas Department of State Health Services dashboard.

In their letter to Abbott, a group of mayors argued that requiring Texans to wear face coverings “could prove to be the most effective way to prevent the transmission of this disease.”

“Yet many people in many of our cities are still refusing to wear these face coverings even though these coverings are scientifically proven to help prevent the disease from spreading,” the mayors wrote in their letter Tuesday. “If mayors are given the opportunity to require face coverings, we believe our cities will be ready to help reduce the spread of this disease.” The mayors of Houston, San Antonio, Austin, Dallas, Fort Worth, El Paso, Arlington, Plano and Grand Prairie — a mix of Republicans, Democrats and Independents — signed on to the letter.

But the governor contends local officials asking for more authority have not imposed penalties and enforcement mechanisms currently available to them if Texans break the rules by participating in large gatherings, for example.

“I make clear on a daily basis around the entire state of Texas that wearing a mask is very important, and local officials send that same message,” Abbott said this week. “So all of us have a collective responsibility to educate the public that wearing a mask is the best thing to do. Putting people in jail, however, is the wrong approach.”