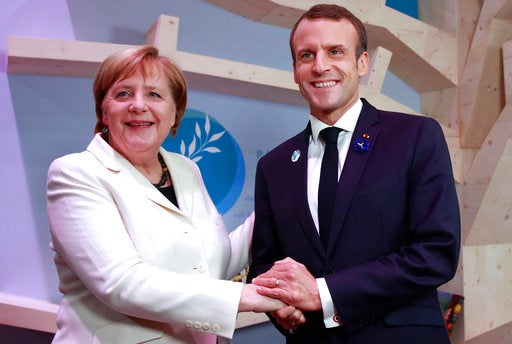 German Chancellor Angela Merkel and French President Emmanuel Macron hold hands after leaving books at the peace library of the Paris Peace Forum as part of the commemoration ceremony for Armistice Day, in Paris, Sunday, Nov. 11, 2018. International leaders attended a ceremony in Paris on Sunday at mark the 100th anniversary of the end of World War I. (Gonzalo Fuentes, Pool via AP)
by: Emma Reynolds, Eva Tapiero and Fred Pleitgen, CNN
Posted: Oct 15, 2020 / 05:53 AM EST / Updated: Oct 15, 2020 / 05:53 AM EST

(CNN) — Paris and other French cities will face an overnight curfew to try to slow the spread of coronavirus, French President Emmanuel Macron announced as restrictions tightened in struggling countries across Europe.

The 9 p.m. to 6 a.m. curfew — which comes into effect at midnight Friday — will also apply to Aix-Marseille, Grenoble, Montpellier, Toulouse, Saint Etienne, Lille, Rouen and Lyon, he said.

“The aim is to reduce private contacts, which are the most dangerous contacts,” Macron said Wednesday.

Social gatherings will be limited to just 10 people and bars and restaurants must close by 11 p.m. in the regions where infection rates are highest.

Merkel added that she felt “uneasy” about the “exponential growth” in Germany’s coronavirus cases and the restrictions would be assessed in the next 10 days to find out if they have slowed the rate of the virus. Merkel also addressed Germany’s young people, urging them to “do without a few parties.”

The number of cases in Germany increased by a record 6,638 in 24 hours, data published by the Robert Koch Institute (RKI) revealed Thursday, bringing the total to 341,223. The second-highest daily increase was at 6,294 on 28 March.

Germany also registered 33 new deaths in the last 24 hours, the RKI added, bringing its total to 9,710.

The Czech Republic registered a record 9,544 new cases on Wednesday, a 926 increase from the previous record set last Friday, the Czech Ministry of Health announced.

The total number of cases has reached 139,290, according to Johns Hopkins University figures.

“The prognosis is not good, the numbers are very catastrophic,” Prime Minister Andrej Babis said Thursday.

Czech government data showed 35 deaths were registered on Wednesday, bringing the death toll to 1,172, while 2,678 people remain hospitalized with coronavirus.

New restrictions were introduced Wednesday, with schools closing and bars and restaurants allowed to serve through windows until 8 p.m.

A preprint paper written by scientific advisers to the UK government yesterday said that thousands of coronavirus deaths in the UK could be averted before the end of the year if a two-week full lockdown were to be imposed.

Northern Ireland is closing schools, pubs and restaurants after it reported 1,217 new Covid-19 cases on Wednesday, a record-high for the nation, taking total cases to 23,115.

Russia also reported a record number of coronavirus-related deaths in the past 24 hours at 286, according to the country’s coronavirus response center data released Thursday.

A further 13,754 new cases were also reported, bringing the overall official number of identified infections to 1,354,163.

Russia has faced a streak of record-high daily increases, with health officials reporting around 2,000 cases more per day than during the spring peak, when the country officially reported around 10,000-11,000 daily cases.