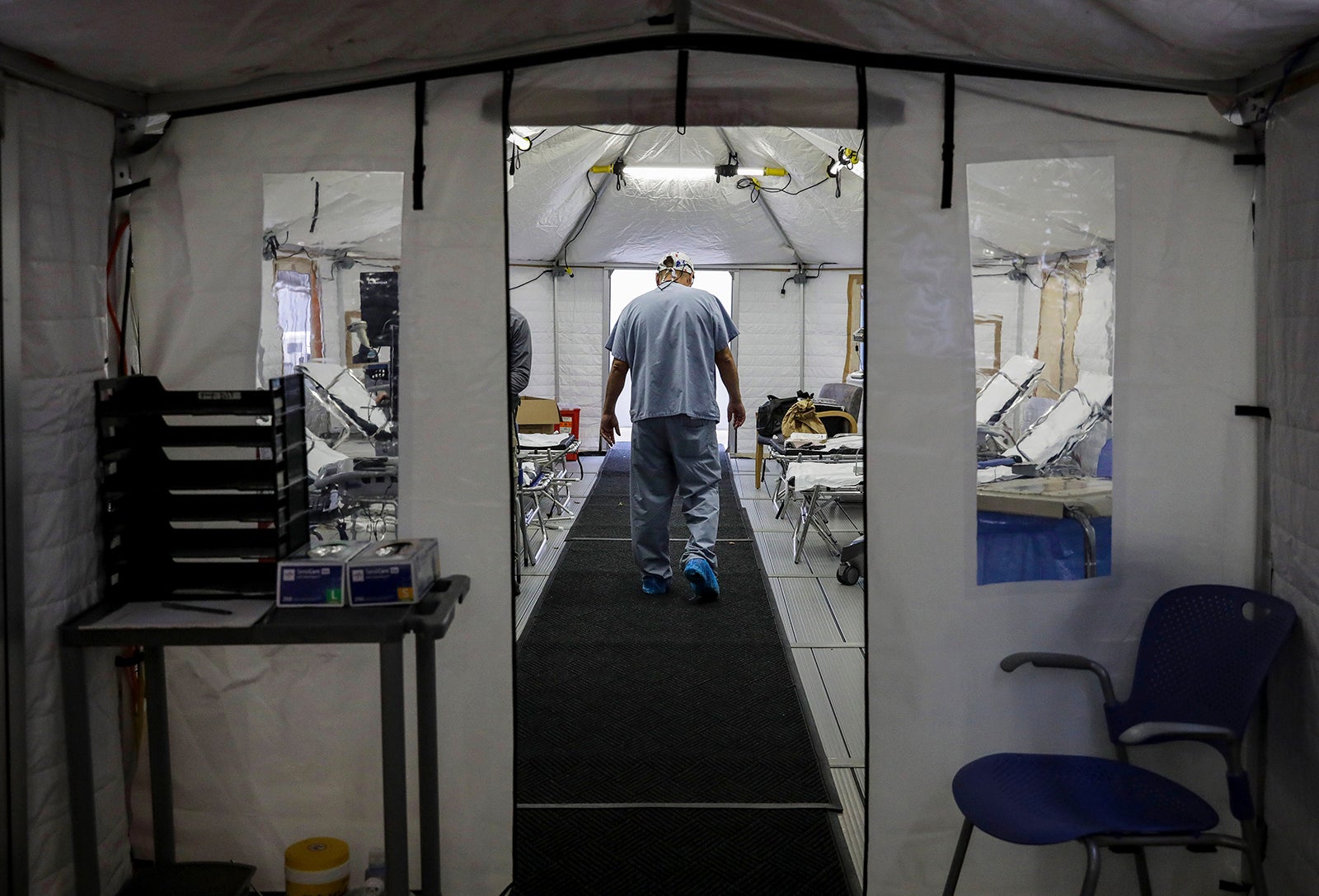 WORCESTER, MA - NOVEMBER 11: PCA Cesar Merida walks through a temporary tent set up at UMass Memorial Hospital in Worcester, MA on Nov. 11, 2020. The tents were put in place for patients visiting the Emergency Medicine department and to address the overfill expected from the uptick of COVID-19 cases. As coronavirus cases rise all across the country, hospitals are vamping up their facilities to prepare for incoming patients. (Photo by Erin Clark/The Boston Globe via Getty Images)
by: By Christina Maxouris, CNN
Posted: Nov 14, 2020 / 01:37 PM EST / Updated: Nov 14, 2020 / 01:41 PM EST

(CNN) — After weeks of asking residents to help slow the spread of Covid-19, several governors have issued stringent new measures to get the virus under control ahead of what could be a brutal winter.

Already, grim indicators offer a glimpse of what’s to come. A little more than a week after the US first topped 100,000 daily infections, it reported a record of more than 184,000 new cases Friday. Hospitalizations also hit a new high — for the fourth consecutive day — with more than 68,500 Covid-19 patients nationwide, according to the COVID Tracking Project. And the country’s death toll has topped 1,300 at least three times this week.

Residents are instructed to stay home except for essential trips, including emergency medical care or getting food.

Oregon Gov. Kate Brown announced a statewide “two-week freeze” Friday. New measures include limiting gatherings to six people from two households; allowing only takeout and delivery for restaurants and bars; closing gyms; and requiring businesses to mandate work from home as much as possible. The measures take effect Wednesday, the governor said, and will likely last “much longer” than two weeks for “hot spot” counties.

“This situation is dangerous, and our hospitals have been sounding the alarms,” Brown said. “I know this is hard, and we are weary. But we are trying to stop this ferocious virus from quickly spreading far and wide.”

Arkansas Gov. Asa Hutchinson announced the creation of a winter Covid-19 task force. And New York Gov. Andrew Cuomo said Friday there will be an emergency meeting this weekend with the state leaders of six northeastern states.

Arizona had 3,476 new cases on Saturday, the third day with more than 3,000 this week alone, according to the Arizona Department of Health Services (ADHS). This breaks the record set on July 31, when the state had 3,212.

The Pennsylvania Department of Health said it had 5,551 new cases Friday, the highest daily increase yet, bringing the statewide total to 259,938.

In Kentucky, at least 24 veterans have died of Covid-19 and more than 80 have been infected since an outbreak last month at Thomson-Hood Veterans Center, Gov. Andy Beshear said Friday.

And Nevada Gov. Steve Sisolak tested positive for Covid-19 Friday, according to a news release from his office.

How people act over the coming weeks will have a “profound impact,” former Surgeon General Dr. Vivek Murthy said Friday.

“This is a grim day for the country, because we’re seeing cases skyrocketing, we’re seeing hospitals fill up and we’re also seeing the death toll march up,” Murthy, co-chair of President-elect Joe Biden’s Transition Covid-19 Advisory Board, said.

“We’re at a point now, even pre-Thanksgiving, where we are surging beyond any level that we have seen over the last eight months,” he added.

“If you’re thinking about going home for Thanksgiving, ask yourself if you can observe these kinds of precautionary practices, because if you can’t, then you may be putting yourself and others at risk,” he said.

Health officials urge Americans to use masks during Thanksgiving celebrations but fear the holiday, and the friend and family gatherings that are likely planned, will fuel the Covid-19 surge. Experts say people who plan to visit family should quarantine ahead of the holiday.

“A vaccine will take a couple of months to really make an impact,” Dr. Jonathan Reiner, a professor of medicine at George Washington University said Friday. “If you’re having a heart attack and you call 911 and I tell you that the ambulance is coming two months from now, that should offer you no comfort.”

Less than 9% of North Dakota staffed hospital beds are available

The rampant spread has put a massive strain on the country’s health care system that’s now hosting the highest number of Covid-19 patients ever.

Data from North Dakota’s health department shows only about 8.5% of staffed hospital beds remain available, with at least 421 people currently hospitalized who tested positive for the virus. About 50 patients are in the ICU.

In Oklahoma, health officials reported a 7% ICU bed capacity Friday, up from 5% a day earlier — with now 64 ICU beds available.

“Today, we have about 661 individuals in the hospital, compared to about 178 on Labor Day,” Gov. Charlie Baker said, adding the state’s hospitals are operating at about 73% capacity and overall ICU capacity is at about 50%.

The DCU field hospital is expected to be available for patients by the first week of December, he said.

Vaccines will be distributed by population, official says

When a Covid-19 vaccine is approved, it will be distributed across US states and territories based on population, a top Operation Warp Speed official said Friday. Drugmaker Pfizer, which this week announced early data shows its vaccine is more than 90% effective, is expected to apply for emergency use authorization from the US Food and Drug Administration by the end of this month.

“We expect to have tens of millions of doses immediately following EUA and we will distribute them as soon as the FDA applies the EUA,” Gen. Gustave Perna, who is helping oversee Operation Warp Speed, said. “We will do that within 24 hours of the EUA.”

“Vaccines will be allocated pro rata by population,” Perna added.

Pfizer has said it will distribute its vaccine outside the federal framework. State health officials have said they have not heard many details from the federal government about how the vaccine distribution will be organized, and they have not received the funding they need to get infrastructure in place.

Meanwhile, retail drug chain Walgreens says it’s “rapidly expanding” its ultra-cold storage capabilities to accommodate a potential Pfizer Covid-19 vaccine — which will need to be stored at temperatures below freezing. That comes after an announcement from the US Department of Health and Human Services that it’s partnering with large chain pharmacies and networks representing independent pharmacies to help distribute a vaccine once it’s authorized.