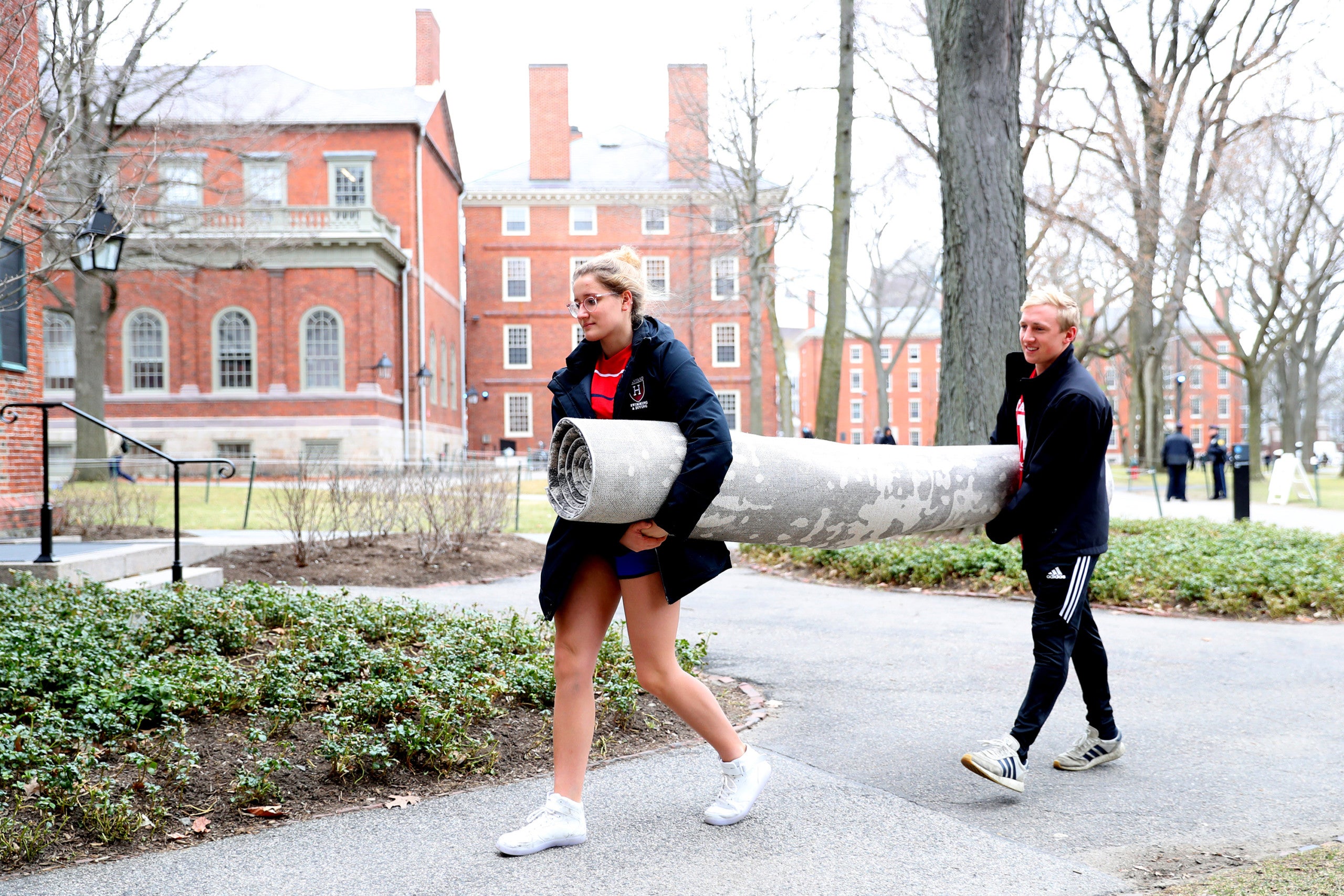 CAMBRIDGE, MASSACHUSETTS - MARCH 12: Sophomore Sophie Butte helps Freshman Alex Petty move his rug across Harvard Yard on the campus of Harvard University on March 12, 2020 in Cambridge, Massachusetts. Students have been asked to move out of their dorms by March 15 due to the Coronavirus (COVID-19) risk. All classes will be moved online for the rest of the spring semester. (Photo by Maddie Meyer/Getty Images)
by: Kerry Flynn, CNN Business
Posted: Jun 9, 2020 / 03:22 PM EST / Updated: Jun 9, 2020 / 03:37 PM EST

(CNN) — Her Campus Media was planning for a massive year of growth. After acquiring three competitors — the Lala, College Fashionista and Spoon University in 2019 — the company had transformed itself into a college media empire. When CNN Business visited the Her Campus Media office in February — located directly across from Fenway Park in Boston — CEO Stephanie Kaplan Lewis said the focus was to build on their new dominance in the market.

“There’s really no one else that sort of squarely corners the college market, that over indexes in 18 to 24, as well as we do,” Kaplan Lewis said at the time. “2020 is really the year of integrating these acquisitions and really fully growing into our new profile, as this media portfolio.”

But her team hadn’t planned for a pandemic that would devastate the media industry and upend the lives of their college-aged community. For the first time in its 11-year history, Her Campus Media laid off employees — citing the economic fallout from coronavirus — shrinking its staff size from 55 to 45 people. It scrapped planned editorial and events calendars and was forced to reimagine how to best serve its contributors and readers.

When CNN Business spoke to Kaplan Lewis after the death of George Floyd, a black man in Minneapolis who died at the hands of police, and whose death sparked unrest and backlash against workplaces that do not promote diversity, she said she is committed to increasing the representation of people of color on her team when she starts hiring again.

Her Campus Media has since pivoted to produce new content and virtual live events. And as students seek ways to adapt to this uncharted territory in their education, the company’s namesake site Her Campus has seen a surge in new college chapters sign-ups, a trend that is atypical as the academic year comes to a close.

And with cities across the country roiled by Black Lives Matter protests, Kaplan Lewis said Her Campus Media has been busy this summer providing chapter leaders with guidance on how to cover the topic, while looking to consultants for help on how to make her company a more inclusive workplace.

“Now is really the time that brands can either make it or break it because this is when people are paying attention,” Cara Chiaramonte, director of community at Her Campus Media, told CNN Business in May. “They’re going to remember the brands and the people who were there for them.”

Her Campus was founded in 2009 by three Harvard undergraduates who met while working at a campus magazine. When the magazine expanded online, Kaplan Lewis, Windsor Hanger Western and Annie Wang discovered that people beyond Harvard’s gates were reading it. That sparked the idea to make an online-only publication for college women, by college women, at schools around the world.

The general idea for Her Campus has not changed much in the last 11 years. Her Campus publishes articles written primarily by college women, though men and people who identify as non-binary also contribute. The company runs the main website and students at college campuses manage sites specific to their schools. Her Campus employees serve as advisers and editors to those groups, called chapters.

The company has grown from a singlecommunity at Harvard to more than 400 chapters internationally. Her Campus Media claimed to reach more than 38 million monthly unique visitors across its properties in 2019, up from 16 million in 2017. That growth is in part due to its acquisitions of other media companies.

Unlike many of its peers in digital media, Her Campus did not raise venture capital funding. The three founders won a Harvard-run business plan competition in 2009 to help them launch. But Kaplan Lewis said they turned down the investment since the “terms were not favorable.” They did accept free office space. In 2011, they won a $50,000 grant from startup accelerator MassChallenge.

“Even though it’s not very typical for a lot of startups right now, we think it’s been absolutely essential to our success,” said Wang, who serves as chief product officer and creative director. “I think it makes it a very real situation that we need to be making money and continue to prove the value of our business.”

Her Campus relies on unpaid contributors who write articles about life on their campuses or about broader topics such as beauty, wellness, and money. While the company makes money through ads on each chapter’s site and on the main page, the revenue doesn’t trickle down to the individual level. Kaplan Lewis said she sees a “value exchange” for the students, many of whom are scattered around the country and vying for limited journalism internships concentrated in media hubs such as New York City.

“We provide an amazing platform and resources. Part of why we created Her Campus was to combat the issue of all of these unpaid internships in New York City that were very few and far between,” Kaplan Lewis said.

Many students join Her Campus because of their interest in a career in media. Alyssa Fiorentino, a 2015 graduate of Fordham University in New York, said that she “really knew nothing going into my freshmen year, except that I was going to work on Her Campus Fordham.” Fiorentino is now director of brand strategy and audience development at House Beautiful and Delish.

“Going into college my goal was to someday become an editor in chief,” Fiorentino told CNN Business. “At the time, Her Campus had an incredibly enticing slogan that said something like ‘Ever dreamed of running your own magazine?’ I was just like, ‘Yes! Yes this is what I want!'”

Like other college extracurricular activities, joining Her Campus also provides students with a sense of community. Lena Daniels, who recently graduated from the University of Central Florida and served as chapter president, said she was motivated to be more involved because of the friends she made.

“It’s really fostering girl power and empowering each other to do better,” Daniels said. “While it started with writing, it’s turned into supporting each other no matter what facets of our life we’re in.”

While on spring break this year, Daniels found out that UCF will be extending the vacation by two weeks due to concerns around the pandemic. The school eventually closed indefinitely and moved classes online. Daniels had missed the most recent in-person Her Campus meeting due to a scheduling conflict, without knowing it would be her last.

Her chapter thenstarted hosting weekly Zoom meetings. Whereas the in-persongatherings typically attract 40 students, attendance whittled down to about 15. Her team typically publishes 20 articles a week, but that dropped to three or five.

Carli Brennan, a rising junior at the Fashion Institute of Technology, said her chapter eliminated any publishing quotas for members. But they continued to see participation, with some who sawwriting as a “good distraction.” The site published articles with headlines such as “How To Make the Best Of Social Distancing,” “5 Quarantine Beauty Essentials” and “Welcome to the World of 90 Day Fiancé: Your Next Binge-Worthy Show.”

Kim Davison, who recently graduated from the University of Utah, said her chapter also dropped requirements for members and pivoted to team-bonding activities including a virtual book club and Wine Wednesdays for those who were of drinking age.

Her Campus Media stopped working from its Boston office on March 10. That transition was fairly seamless since the company had regular work-from-home Fridays and many team members were already remote, including cofounders Hanger Western and Wang. The big stressor was needing to rethink everything in editorial, Kaplan Lewis said in a phone interview in May.

“So many things we would usually cover — spring break, study abroad, doing job interviews throughout the semester — none of that was relevant anymore,” Kaplan Lewis said. “We really started over. Even so much content that we have that might be evergreen from year to year, might be updated, refreshed and republished, none of that made sense anymore.”

The team asked community members about their major pain points and revamped the business around them. The cancellation of end of school year events, particularly the Class of 2020’s graduation, was among the things members named as a sore spot. In response, Her Campus planned a live virtual graduation event. On May 15, they streamed more than six hours of speeches from students and celebrities, and musical performances by Jesse McCartney and Isabela Merced. Daniels of UCF was one of the student speakers.

“Her Campus has been in my life since my first semester in college and getting to end it with Her Campus is really full circle,” Daniels said. “My college graduation was virtually online and kind of lame, but the Her Campus one was so much more special. I ended the day with tears, and I’m not a very emotional person.”

Her Campus also revamped its daily email newsletter to include productivity and self-care tips. And they encouraged writers to keep up with career-related content, but through the lens of the pandemic with headlines such as “10 Remote Internships That Are Hiring Right Now” and “How Do I Keep My Career Plans On Track With Coronavirus.”

The impact on the company’s revenue was fairly sudden. Her Campus relies on advertising as well as in-person events. They had planned to host college campus tours for brands that spring. At the end of March, Her Campus let go of 10 employees across alldepartments.

But Kaplan Lewis said all the changes stemming from the pandemic — most notably the virtual graduation event — helped the company notch the highest sales month in its history in April. That does not mean they will be able to bring back employees or make new hires due to uneasy projections for the rest of the year. But the company did secure a payroll protection plan loan in May, which will help prevent any further layoffs.

Her Campus chapters tend to go dark during the summer when students are on break. But Chiaramonte, the director of community, said the company has seen an unprecedented number of applications for new chapters. Since April 8, her team has onboarded eight schools and has at least 10 applications under review.

Her Campus is also preparing for another virtual event. Instead of its annual Her Conference, the company is hosting Doing My Best Fest on July 18,which will feature workshops on navigating career and wellness during the pandemic.

The company is trying to figure out how to help students in the fall manage their teams when some may continue to operate remotely and others may be on campus but under new guidelines.

Camden Carpenter, a rising senior at Virginia Tech, said her chapter typically starts up again in August. But they may be reconvening sooner due to concerns about recruitment. Carpenter said she discovered Her Campus through her school’s annual extracurricular fair. But if school isn’t on campus in the fall, that event won’t likely be happening.

“Our recruitment strategy may not be an option,” Carpenter said. “So we’re thinking how do we recruit virtually? Maybe we’ll focus on our social media.”