Oklahoma’s governor says he has tested positive for COVID-19 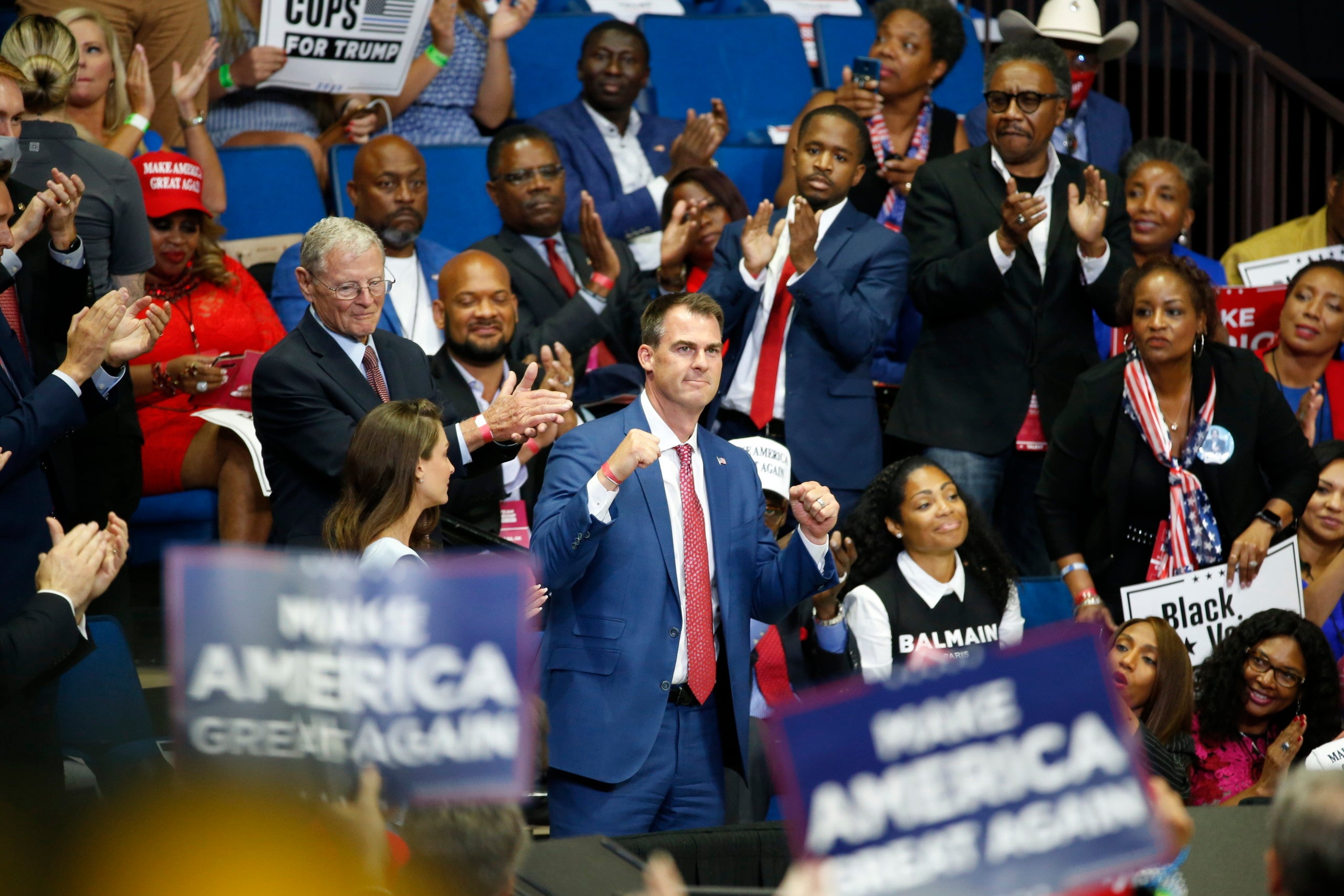 FILE - In this June 20, 2020 file photo, Oklahoma Gov. Kevin Stitt is recognized as President Donald Trump speaks during a campaign rally at the BOK Center, in Tulsa, Okla. Stitt announced Wednesday, July 15, 2020, that he's tested positive for the coronavirus and that he is isolating at home. The first-term Republican governor has backed one of the country's most aggressive reopening plans, has resisted any statewide mandate on masks and rarely wears one himself. (AP Photo/Sue Ogrocki, File)
by: By SEAN MURPHY Associated Press
Posted: Jul 15, 2020 / 02:07 PM EST / Updated: Jul 15, 2020 / 02:15 PM EST

OKLAHOMA CITY (AP) — Oklahoma Gov. Kevin Stitt announced Wednesday that he’s the first governor in the United States to test positive for the coronavirus and that he is isolating at home.

Stitt, 48, said he mostly feels fine, although he started feeling “a little achy” on Tuesday and sought a test. He said his wife and children were also tested Tuesday and that none of them have tested positive.

Stitt has backed one of the country’s most aggressive reopening plans, resisted any statewide mandate on masks and rarely wears one himself.

“We respect people’s rights … to not wear a mask,” Stitt said during Wednesday’s news conference, which was held virtually. “You just open up a big can of worms.

“A lot of businesses are requiring it, and that’s fine. I’m just hesitant to mandate something that I think is problematic to enforce,” he said.

Stitt said he’s confident he didn’t contract the virus at the rally.

“As far as where he became infected, it’s really unknown,” Oklahoma Health Commissioner Dr. Lance Frye said. “It wasn’t so far back as the rally,” which took place nearly a month ago.

Frye said contact tracing has begun in Stitt’s case, with a particular emphasis on determining those who may have been within 6 feet of the governor for longer than 15 minutes.

In recent months, Stitt has attended numerous meetings and press conferences in which he was in close contact with people without wearing a mask. And he came under fire early in the pandemic after he tweeted a photo of himself and his children eating at a crowded restaurant.

On Tuesday morning, he attended a meeting of the Commissioners of the Land Office in a conference room at the state Capitol that was attended by more than 20 people.

Stitt said he has reached out to Lt. Gov. Matt Pinnell and Secretary of Agriculture Blayne Arthur whom he said he spoke with during the meeting.

One of Stitt’s cabinet members, David Ostrowe, tested positive for the coronavirus in March.

Coronavirus-related hospitalizations also are surging in Oklahoma, increasing from 458 last week to 561 on Wednesday, although Frye said there is still plenty of hospital capacity.

While Stitt has resisted calls for a statewide mask mandate, several local municipalities have enacted one, including Norman and Stillwater. Tulsa’s city council is expected to consider a mask mandate on Wednesday.

Dr. George Monks, the president of the Oklahoma State Medical Association, said Stitt’s diagnosis is an “unfortunate reminder that no one is safe from this rampant pandemic.”

“On behalf of Oklahoma’s physicians, we wish the governor a quick recovery and encourage all Oklahomans to take protective measures that can help slow the spread of coronavirus.”