People over 75, essential workers next in line for vaccine 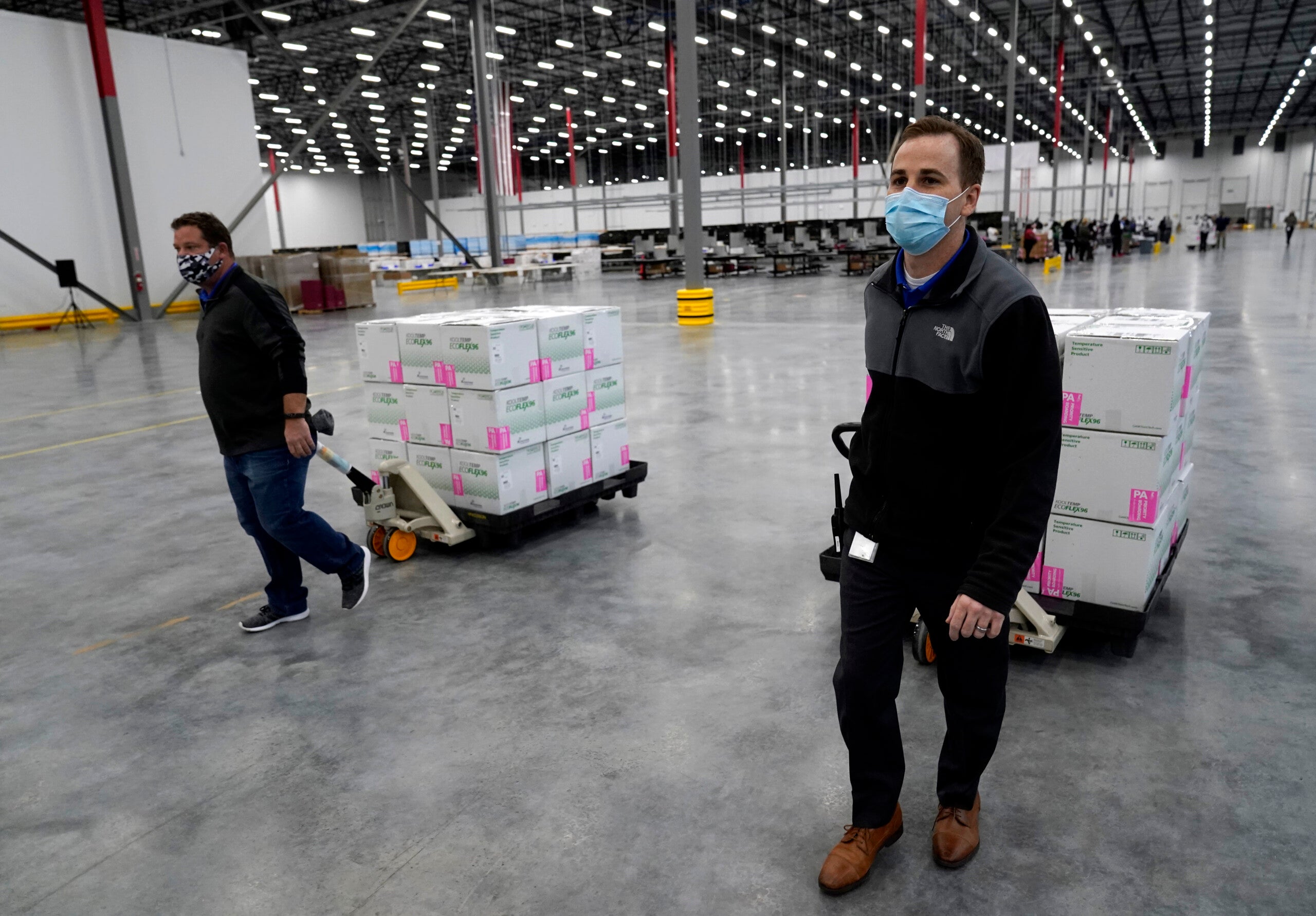 NEW YORK (AP) — An expert committee put people 75 and older and essential workers like firefighters, teachers and grocery store workers next in line for COVID-19 shots as a second vaccine began rolling out Sunday to hospitals, a desperately needed boost as the nation works to bring the coronavirus pandemic under control.

The developments occurred as the nation seeks to ramp up a vaccination program that only began in the last week and so far has given initial shots to about 556,000 Americans, according to the Centers for Disease Control and Prevention.

Initial shipments of the second COVID-19 vaccine authorized in the U.S. left a distribution center Sunday, a desperately needed boost as the nation works to bring the coronavirus pandemic under control.

The trucks left the Olive Branch, Mississippi, factory, near Memphis, Tennessee, with the vaccine developed by Moderna Inc. and the National Institutes of Health. The much-needed shots are expected to be given starting Monday, just three days after the Food and Drug Administration authorized their emergency rollout.

In Louisville, Kentucky, UPS driver Todd Elble said his vaccine shipment was the “most important load that I’ve hauled” in a 37-year career. His parents contracted COVID-19 in November, and his 78-year-old father died. He said the family speculates that his father got infected while traveling on a hunting trip with four other relatives to Wyoming, and some are still sick.

“I’m going to take the vaccine myself. I’m going to be first in line for my father — I’ll tell you that much — and any others that should follow,” he said. “I feel in my heart that everybody should, to help get this stopped.”

He added: “To bring this back, I feel Dad was in the truck with me today.”

Dr. Moncef Slaoui, the chief science adviser to the federal government’s vaccine distribution effort, said on CNN’s “State of the Union” that nearly 8 million doses will be distributed Monday, about 5.9 million of the Moderna vaccine and 2 million of the vaccine from Pfizer Inc. He said the first Moderna shots should be given Monday morning.

Also on Sunday, an expert committee began considering who should be next in line for early doses of the Moderna vaccine and the one from Pfizer and Germany’s BioNTech. Pfizer’s shots were first shipped out a week ago and started being used the next day, kicking off the nation’s biggest vaccination drive.

Public health experts say the shots — and others in the pipeline — are the only way to stop a virus that has been spreading wildly. Nationwide, more than 219,000 people per day on average test positive for the virus, which has killed over 316,000 in the U.S. and nearly 1.7 million worldwide.

Slaoui also predicted the U.S. will experience “a continuing surge,” with larger numbers of coronavirus cases possible from gatherings for Christmas.

“I think, unfortunately, it will get worse,” he said.

The Pfizer and Moderna shots shipped so far and in the next few weeks are nearly all going to health care workers and residents of long-term care homes, based on the advice of the Advisory Committee on Immunization Practices.

There won’t be enough shots for the general population until spring, so doses will be rationed at least for the next several months. President-elect Joe Biden pledged earlier this month to have 100 million doses distributed in his first 100 days in office, and his surgeon general nominee said Sunday that it’s still a realistic goal.

But Vivek Murthy, speaking on NBC’s “Meet the Press,” said it’s more realistic to think it may be midsummer or early fall before coronavirus vaccines are available to the general population, rather than late spring. Murthy said Biden’s team is working toward having the shots available to lower-risk individuals by late spring but doing so requires “everything to go exactly on schedule.”

“I think it’s more realistic to assume that it may be closer to mid-summer or early fall when this vaccine makes its way to the general population,” Murthy said. “So, we want to be optimistic, but we want to be cautious as well.”

Meanwhile, Trump’s surgeon general, Jerome Adams, defended the administration’s handling of the Pfizer vaccine Sunday, a day after the Army general charge of getting COVID-19 vaccines across the U.S. apologized Saturday for “miscommunication” with states over the number of doses to be delivered in the early stages of distribution. At least a dozen states reported they would receive a smaller second shipment of the Pfizer vaccine than they had been told previously.

Gen. Gustave Perna told reporters in a telephone briefing that he made mistakes by citing numbers of doses that he believed would be ready. Slaoui said the mistake was assuming vaccines that had been produced were ready for shipment when there was a two-day delay.

“And unless it’s perfectly right, we will not release vaccine doses for usage,” he said. “And, sometimes, there could be small hiccups. There have been none, actually, in manufacturing now. The hiccup was more into the planning.”

But Adams, speaking on CBS’ “Face the Nation,” said that “the numbers are going to go up and down.”

Adams, who is Black, said he understands that mistrust of the medical community and the vaccine among Blacks “comes from a real place,” the mistreatment of communities of color. He cited the decades-long Tuskegee experiment in Alabama, where Black men with syphilis were not treated so the disease could be studied.

He also said immigrants in the U.S. illegally should not be denied the vaccine because of their legal status because “it’s not ethically right to deny those individuals.”

“I want to reassure people that your information when collected to get your second shot, if you get the Pfizer or Moderna vaccine, will not be used in any way, shape or form to harm you legally,” Adams said. “That is something that I have been assured of.”

The expert panel members are leaning toward putting “essential workers” next in line, because people like bus drivers, grocery store clerks and others are getting infected most often. But other experts say people 65 and older should be next, along with people with certain medical conditions, because those are the Americans who are dying at the highest rates.

The expert panel’s advice is almost always endorsed by the U.S. Centers for Disease Control and Prevention. No matter what the CDC says, there will be differences from state to state, because various health departments have different ideas about who should be closer to the front of the line.

Both the Moderna vaccine and the Pfizer-BioNTech shot require two doses several weeks apart. The second dose must be from the same company as the first. Both vaccines appeared safe and strongly protective in large, still unfinished studies.