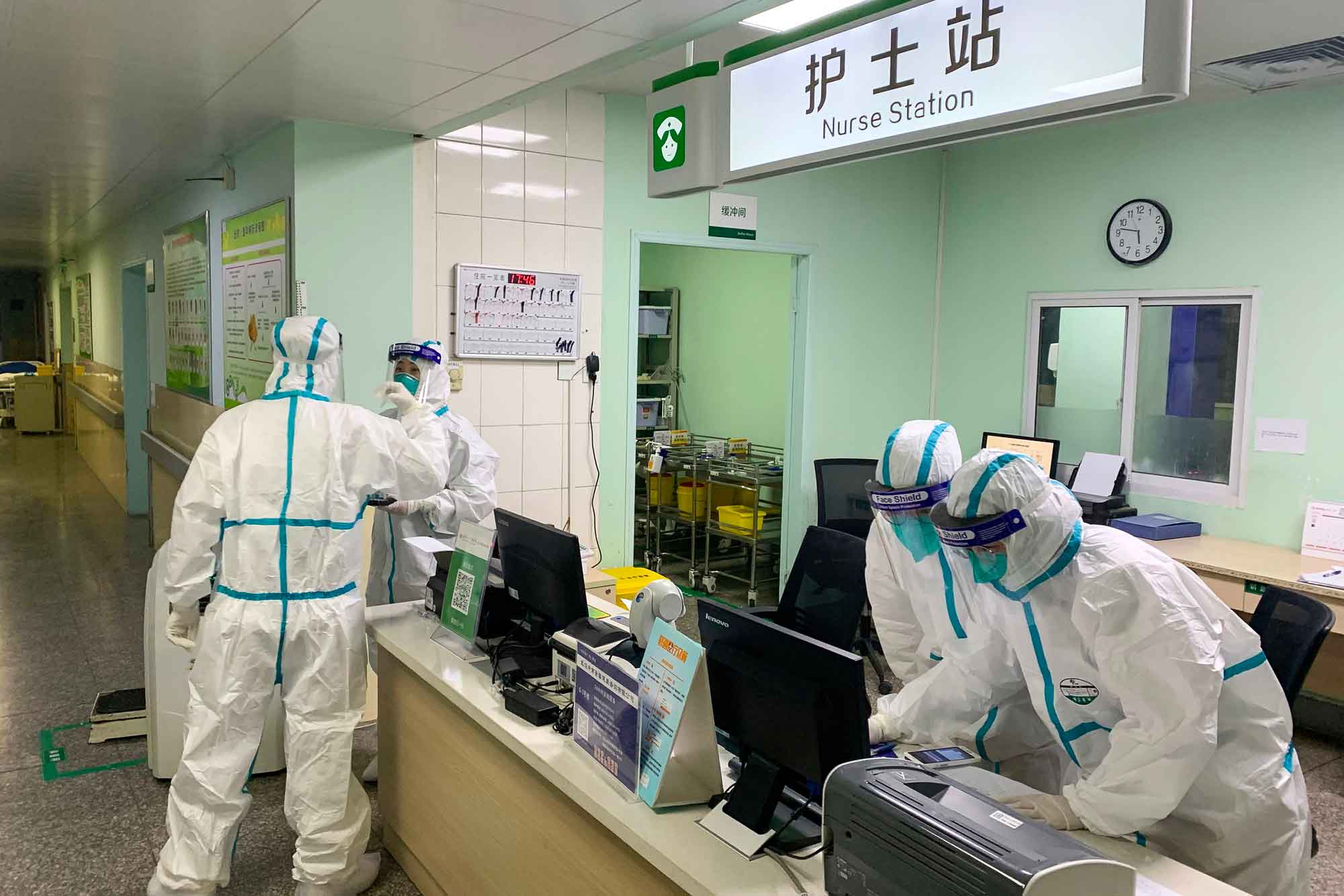 TOPSHOT - This photo taken on January 22, 2020 shows medical staff members wearing protective suits at the Zhongnan hospital in Wuhan in China's central Hubei province. - China banned trains and planes from leaving Wuhan at the centre of a virus outbreak on January 23, seeking to seal off its 11 million people to contain the contagious disease that has claimed 17 lives, infected hundreds and spread to other countries. (Photo by STR / AFP) / China OUT (Photo by STR/AFP via Getty Images)
by: Shelby Lin Erdman, CNN
Posted: Jun 9, 2020 / 04:38 PM EST / Updated: Jun 9, 2020 / 05:00 PM EST

(CNN) — Satellite images of hospital parking lots in Wuhan, China, as well as internet search trends, suggest the coronavirus may have been spreading in China as early as last August, according to a new study from Harvard Medical School.

The study, which has not yet been peer-viewed, found a significantly higher number of cars in parking lots at five Wuhan hospitals in the late summer and fall of 2019 compared to a year earlier; and an uptick in searches of keywords associated with an infectious disease on China’s Baidu search engine.

The reseachers note they can’t directly link the traffic volume to the virus; even if there was an increase in traffic to hospitals, it doesn’t mean a new virus was the cause. There has been no other evidence to show the virus was circulating in China in the late summer.

The timeline in the new paper suggests signs of the novel coronavirus outbreak emerged well before the currently understood start. The first cases in Wuhan were detected in mid-December, and Chinese officials reported cases of pneumonia to the World Health Organization on December 31. Chinese scientists identified the pathogen as a new strain of coronavirus on January 7.

WHO and China have faced criticism, including from President Donald Trump, of their handling of the virus early on.

Chinese Foreign Ministry spokeswoman Hua Chunying said Tuesday she she hadn’t seen the research, “but I think it’s outrageously absurd if anyone comes to such conclusion only based on superficial elements like the traffic patterns,” calling the research methods “hardly watertight.”

“There have been so many conspiracy theories against China, which is so unfair,” she said. “The most pressing task for the international community at this moment is to do everything to control the spread of the pandemic and save more lives.”

Piecing together a complicated puzzle

In the new paper, researchers saw “a steep increase in volume starting in August 2019 and culminating with a peak in December 2019,” the team, led by Boston Children’s Hospital Chief Innovation Officer John Brownstein, wrote in a preprint posted on Harvard’s DASH server.

Using images from October 2018, the researchers counted 171 cars in the parking lots at one of Wuhan’s largest hospitals, Tianyou Hospital. Satellite data a year later showed 285 vehicles in the same lots, an increase of 67%, and as much as a 90% increase in traffic during the same time period at other Wuhan hospitals.

“Individual hospitals have days of high relative volume in both fall and winter 2019. However, between September and October 2019, five of the six hospitals show their highest relative daily volume of the analyzed series, coinciding with elevated levels of Baidu search queries for the terms ‘diarrhea’ and ‘cough’,” they wrote.

“This is all about trying to piece together a complicated puzzle of what was taking place at the time,” Brownstein told CNN.

“The data is actually especially compelling because we saw increases in people searching for gastrointestinal disease — diarrhea — which were increasing at a level that we hadn’t seen at all, historically, and we now know now that gastrointestinal symptoms are a really important marker for Covid,” he added. “A huge percentage of people that actually end up testing positive in Wuhan actually had presented symptoms of diarrhea.”

Paul Digard, a professor and chair of virology at University of Edinburgh, told the Science Media Center in the UK that using hospital traffic images to detect disease is “an interesting idea with some validity.”

“However, it’s important to remember that the data are only correlative and (as the authors admit) cannot identify the cause of the uptick,” Digard said. “By focusing on hospitals in Wuhan, the acknowledged epicentre of the outbreak, the study forces the correlation.”

“Both the idea that hospital parking lots or business can be used can be a relative indicator for something happening in a population,” Brownstein said. “We actually published on this years ago where we showed that hospitals in Latin America got super busy during flu season. You could predict flu season just by looking at the parking lots.”

And that was the idea in this study, he said.

“Now we can’t prove clearly what was driving some of these signals but it sort of adds to a growing body of evidence that something was happening ahead of when it was officially recognized,” he said.

“While we cannot confirm if the increased volume was directly related to the new virus, our evidence supports other recent work showing that emergence happened before identification at the Huanan Seafood market,” according to Brownstein and his team. “These findings also corroborate the hypothesis that the virus emerged naturally in southern China and was potentially already circulating at the time of the Wuhan cluster.”

The United States found out in early January that a respiratory-based epidemic was spreading through Wuhan, but it would take weeks before the first known case was identified in the United States in Seattle and the federal government would begin to take any action.

“We also have the challenges of the lack of testing in this country, so signals were probably missed here, as well, that transmission was happening and we didn’t know about it either,” Brownstein said.

More than 7 million people have since been infected with the deadly virus worldwide, according to Johns Hopkins University, with more than 404,000 global deaths and more than 110,000 deaths in the US.